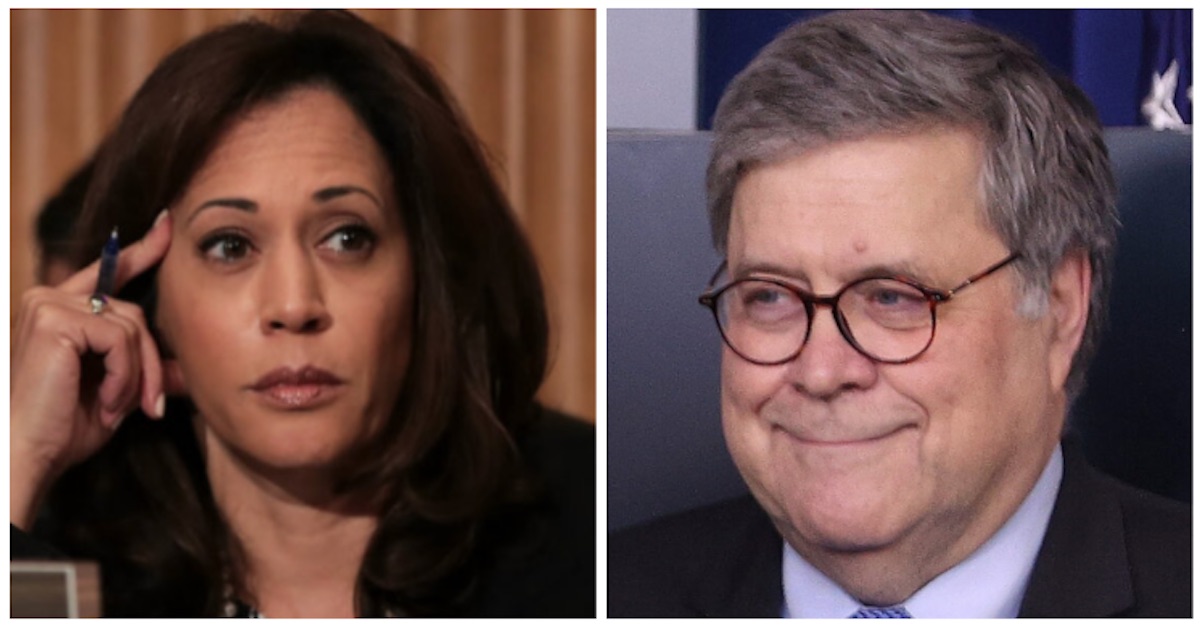 After Attorney General William Barr said Thursday that there was “no correlation” between the much-criticized clearing out of protestors in Lafayette Square and the president’s ensuing photo op with a Bible on Monday in front of St. John’s Church, Sen. Kamala Harris (D-Calif.) challenged Barr to say that under oath.

I invite Bill Barr to say this in front of the Senate Judiciary Committee—under oath. https://t.co/TpTG659XxV

“I invite Bill Barr to say this in front of the Senate Judiciary Committee—under oath,” Harris said.

The invitation from Harris, a member of the Senate Judiciary Committee, comes two days after House Judiciary Committee Democrats announced plans to hear testimony from several DOJ whistleblowers and made a threat to cut the budget of the attorney general’s personal office. This was their counter to Barr’s “refusal” to testify before the panel.

Barr claimed Thursday that there was “no correlation between our tactical plan of moving the perimeter out by one block and the President’s going over to the church.” The administration continues to say one thing about the use of force that day, while the press and evidence from the scene say another. For instance, White House press secretary Kayleigh McEnany said Wednesday that “No tear gas was used, and no rubber bullets were used.” President Trump also said no tear gas was used. But evidence showed otherwise.

Barr, who was among the gaggle of cabinet members and Trump advisors who joined the president in front of St. John’s Church on Monday, said the photo op with the Bible was not necessarily a “political act.” Barr also said the action to “move the perimeter” was planned before he heard about the walk to St. John’s Church.

“I think the president is the head of the executive branch and the chief executive of the nation and should be able to walk outside the White House and walk across the street to the ‘church of presidents.’ I don’t necessarily view that as a political act,” he said. “I think it was entirely appropriate for him to do. I did not know that he was going to do that until later in the day after our plans were well underway to move the perimeter.”

“It was our hope to be able to do that relatively quickly before many demonstrators appeared that day. Unfortunately, because of the difficulty in getting appropriate forces — units — into place, by the time they were able to move a perimeter up to us there had been a large number of protesters had assembled,” Barr added.

Some suggested that Barr’s “no correlation” remark was a verbal sleight of hand.