A federal magistrate judge in Iowa on Thursday ordered the employees at a dairy farm owned by the father and brother of Rep. Devin Nunes (R-Cal.) to produce documentation concerning their immigration status in the family’s protracted defamation lawsuit filed against Esquire magazine and journalist Ryan Lizza. The court also singled out attorney Steven Biss—known for representing the Republican lawmaker in a series of failed defamation suits against news organizations—for his “puzzling and troubling” explanation about a deposition of a dairy farm employee.

The eight-page order from U.S. Magistrate Judge Mark Roberts of the Northern District of Iowa came in response to a motion filed by attorneys representing Hearst Magazine Media, Inc. (Hearst owns and publishes Esquire) concerning their first attempt to depose one of the dairy farm employees, who is referred to as F.S.D. in court documents.

Esquire’s filing complained that during the deposition of F.S.D., Biss “asserted argumentative objections that were disruptive and intended to intimidate or coach the witness” when counsel tried to question F.S.D. about legal documents that bore his signature. Biss denied the accusation, saying he only “intended to call out the Defendants’ overt harassment of the NuStar employee.” But Judge Roberts called Biss’s explanation “puzzling and troubling.”

“Mr. Biss made a lengthy speaking objection claiming this was harassment,” Roberts wrote. “Here, where the identity and immigration status of the employees is a central issue, it is not harassing or irrelevant to ask questions about such documents. In the context of this case, it is not conducive to obtaining truthful answers from an employee such as F.S.D. to have his employer’s lawyer making lengthy, animated objections to those questions.”

Judge Roberts further stated that “the most puzzling and troubling aspect” of Biss’s “behavior” concerned his decision to seek a sidebar with F.S.D.’s attorney to determine “whether the witness wanted to take the Fifth Amendment.”

The sidebar, which the judge noted lasted approximately two hours, occurred immediately after F.S.D.’s attorney Justin Allen said that he’d advised F.S.D. to invoke the Fifth Amendment regarding questions about the legal documents that bore his signature. When the attorneys returned to the deposition room, F.S.D.’s attorney informed Esquire’s counsel that he was no longer representing F.S.D. and Biss said the deposition was over pending rescheduling. 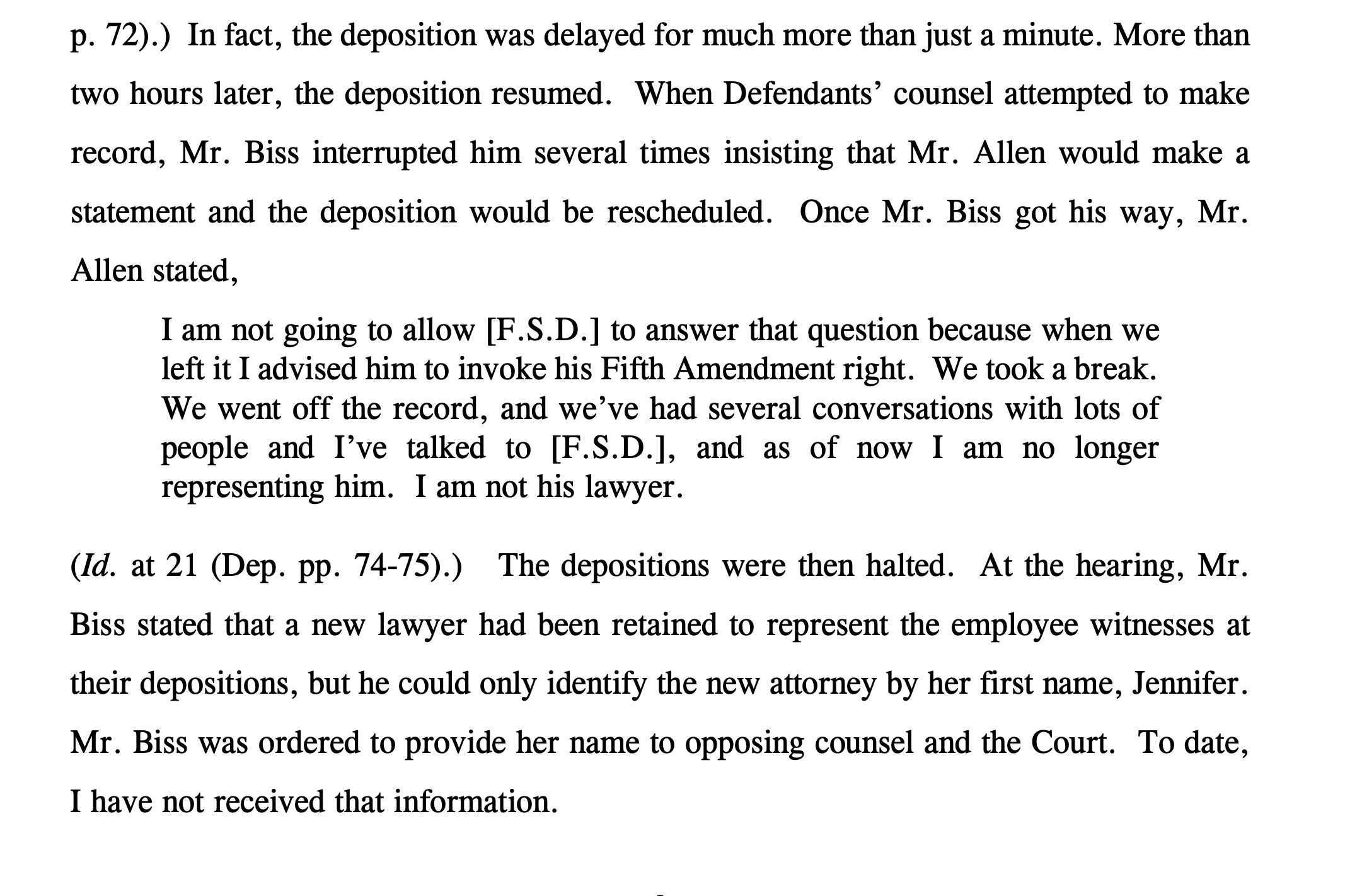 “Normally, one would expect the lawyer for a deponent to be in the best position to ascertain whether the deponent desires to assert a privilege,” Judge Roberts wrote. “Mr. Biss makes bald assurances that the employees want to answer all questions and not assert their Fifth Amendment rights. Nevertheless, Mr. Biss’s behavior—coupled with the facts that (a) the privilege was raised, (b) the privilege was perhaps withdrawn after a lengthy sidebar, and (c) Mr. Allen was fired—gives me little confidence that F.S.D. could make a knowing waiver of his Fifth Amendment rights under these circumstances.”

Roberts ordered Biss and all the NuStar attorneys to read a court case to provide “instruction on appropriate behavior” regarding attorneys pressuring witnesses not to assert their rights, though the judge was clear that he made no finding on whether such pressure did occur.

Additionally, Roberts ordered Biss and all other NuStar attorneys to “inform the [NuStar] employees of their obligation to search for the requested [citizenship] documents and bring the documents to the deposition, if they still possess them,” adding that the employees “may be asked about their efforts to comply at the deposition.”

Read the order below.