Who Leaked Letter About U.S. Withdrawal from Iraq? | Law & Crime 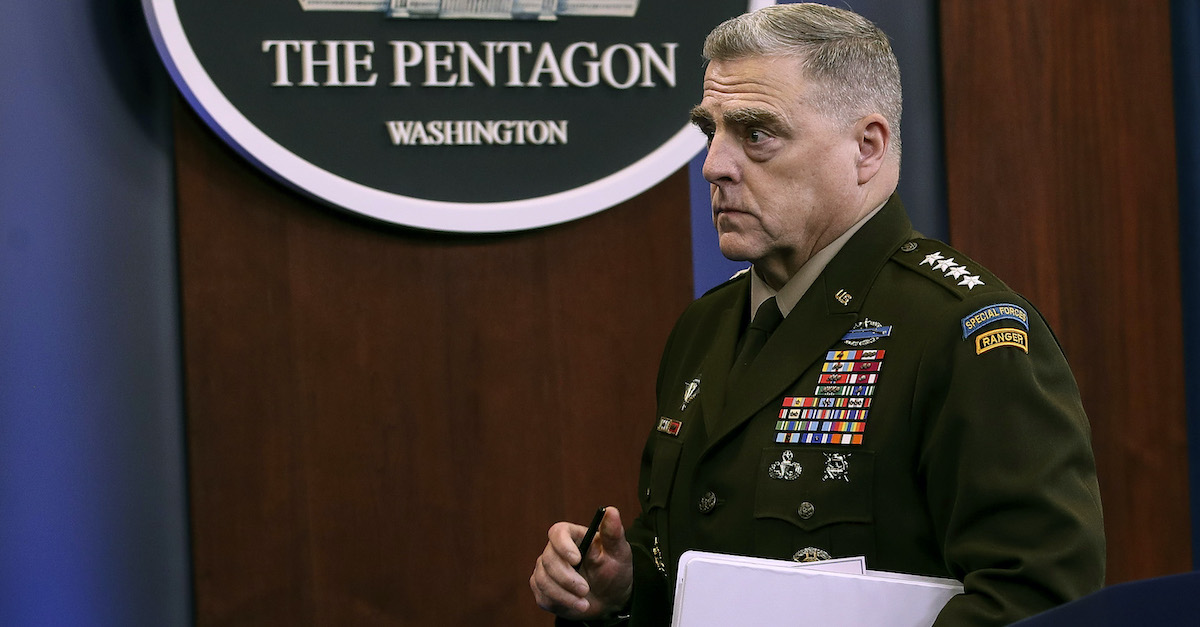 Gen. Mark Milley exits after an end of year press conference at the Pentagon on December 20, 2019 in Arlington, Virginia. Esper and Milley fielded questions on a wide range of topics, including the situation in North Korea and a recent Washington Post referred to as the “Afghanistan Papers.”

Amid rising tensions between the U.S. and Iran, a “draft” letter indicating that American troops were going to be withdrawn from Iraq was mistakenly released, the United States government says.

Chairman of the Joint Chiefs of Staff Army Gen. Mark Milley responded to news of the letter on Monday saying, “That letter is a draft it was a mistake, it was unsigned, it should not have been released…poorly worded, implies withdrawal, that is not what’s happening.” Defense Secretary Mark Esper also said Monday that there were “no plans” to withdraw troops from Iraq.

But that didn’t immediately clear up the confusion, as the letter was delivered to the Iraqi military.

Who leaked the letter? According to Washington Post Beirut bureau chief Liz Sly, it was leaked by the Iraqi Prime Minister’s office to Iraqi media and “first released” by an Iran-backed group Asa’ib Ahl al-Haq, which the U.S. State Department has designated a Foreign Terrorist Organization just days ago.

Perhaps the ultimate irony: the letter describing U.S. troop movements "out of Iraq", leaked to Iraqi media by the PM's office, was first released by the Iran-backed Asaib Ahl al-Haq on its TV channel. AAH blew up many US troops & its leader is a US-designated terrorist.

The “draft” letter, pictured below, was a response to a vote in a Iraq to expel U.S. troops following the airstrike at a Baghdad airport that took out Iranian Maj. Gen. Qassem Soleimani and Iraqi militia leader Abu Mahdi al-Muhandis. 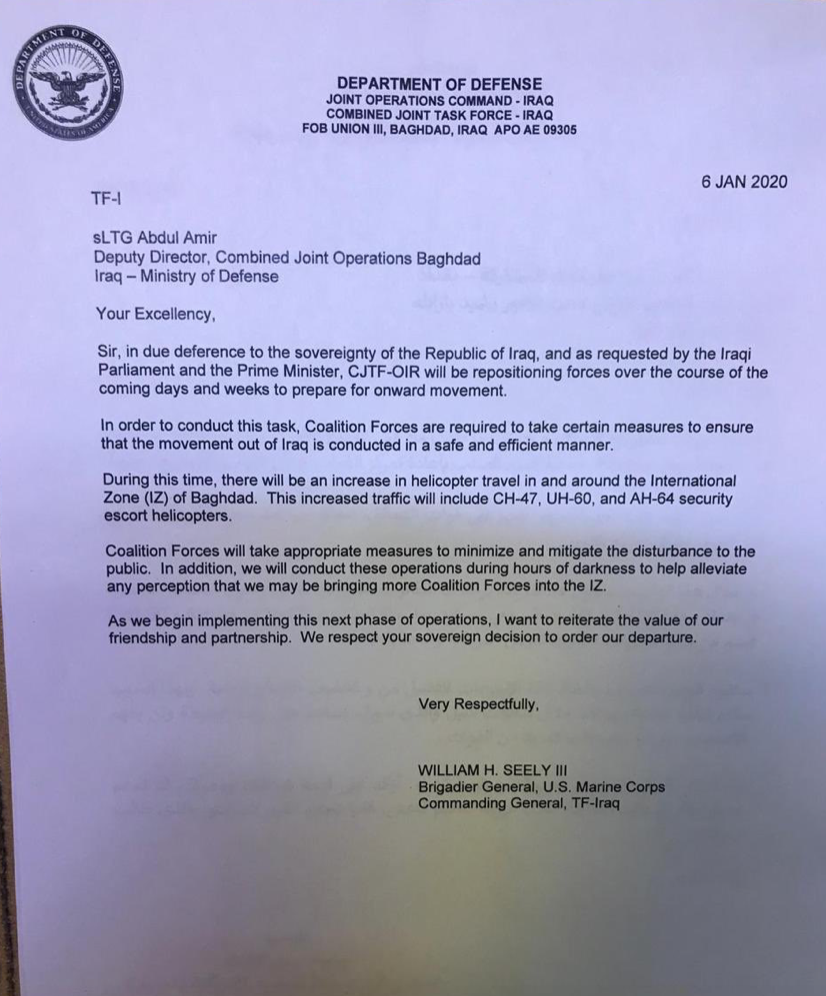 “[I]n due deference to the sovereignty of the Republic of Iraq, and as requested by the Iraqi Parliament and the Prime Minister, CJTF-OIR will be repositioning forces over the course of the coming days and weeks to prepare for onward movement,” the unsigned letter attributed U.S. Marine Corps Brigadier General William H. Seely III.

“As we begin implementing the next phase of operations, I want to reiterate the value of our friendship and partnership,” the letter continued. “We respect your sovereign decision to order our departure.”

The Keystone Cops-style display was predictably mocked as “incompetence.”

Nobody on planet earth knows what or whom to believe in this administration. https://t.co/EhdkThwdrX

Wait… we sent the Iraqi military a letter suggesting we were leaving the country but it was actually just a draft letter and a mistake?

hahahaha these morons they’re going to get us all killed https://t.co/8OSYOwEoKq