Board Recommends Reprimand for Lawyer After Bart Simpson-like Punishment 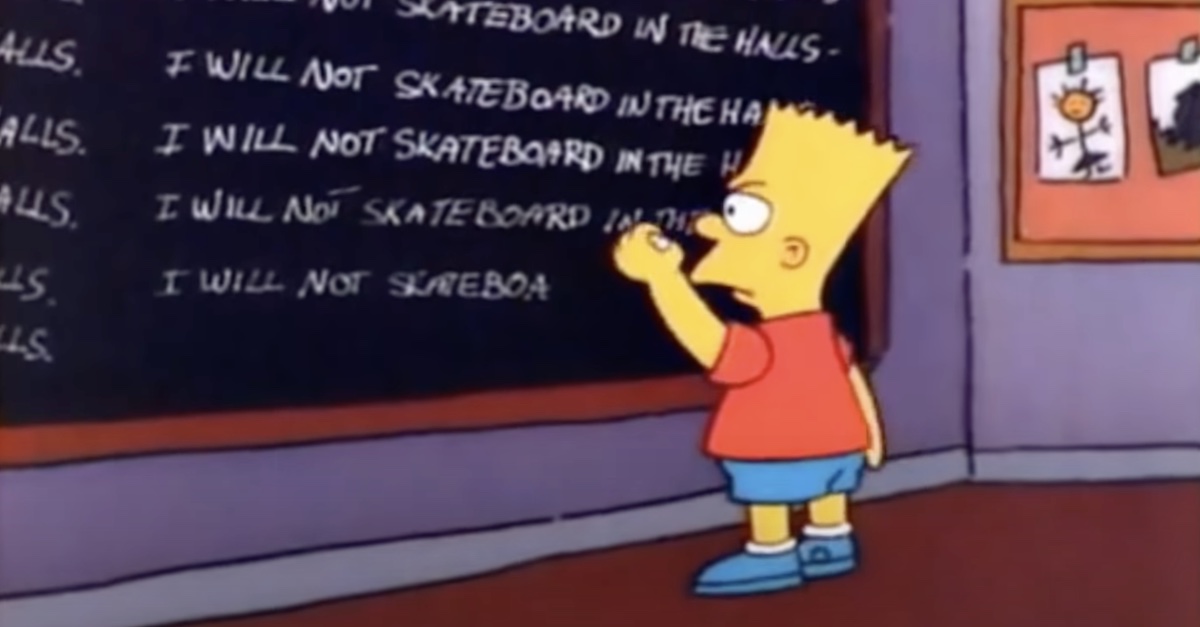 Thanks to a judge’s creative disciplinary technique, one Ohio lawyer was ordered to repent for his courtroom sins in a manner more typical of the opening sequence of The Simpsons than for a legal proceeding.

Now, the Ohio Supreme Court’s Board of Professional Conduct, as part of a disciplinary assessment, has referenced the trial judge’s order that imposed a fine and what’s being called a “Bart Simpson-esque” punishment. Cleveland criminal defense attorney Anthony Baker had to repeatedly handwrite a series of “I will not . . . ” sentences to show his contrition for disrupting a trial. The board recommended that Baker should be publicly reprimanded, but should not lose his license to practice law.

Baker had represented a defendant in a domestic violence proceeding before Judge Nancy Fuerst. Baker asked the court to read a jury instruction on self-defense, and Fuerst declined to do so. Instead opting to simply appeal the judge’s ruling, Baker “stag[ed] a protest” by sitting in the back of the courtroom. According to an official report, Baker engaged in repeated efforts to stop the trial from proceeding, and when that didn’t work, he left the defense table and stood behind a television stand to show that he refused to participate. 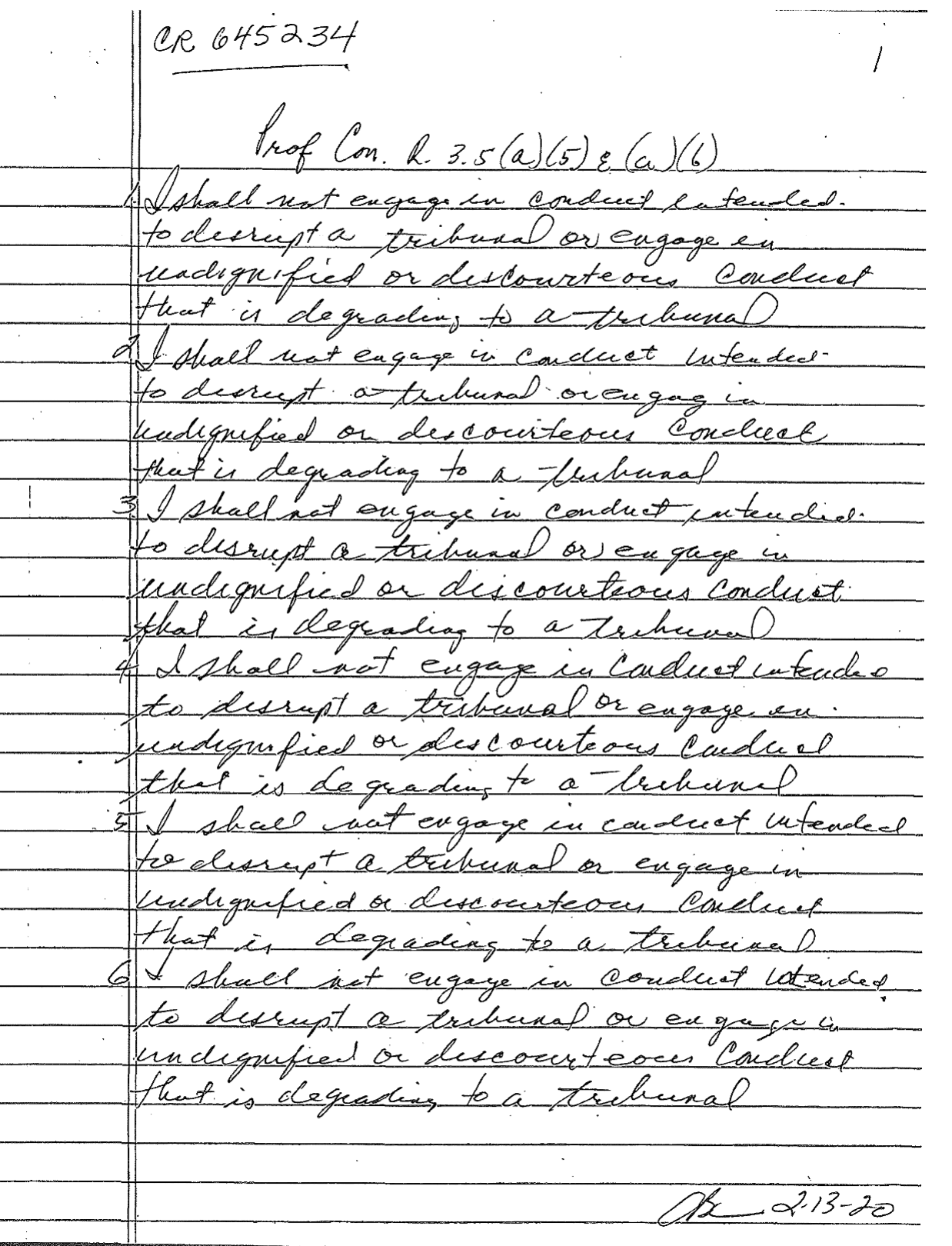 One page of an exhibit, showing what Baker wrote.

Baker complied with the court’s order, paying the fine and doing the writing (though photos later submitted showed that it was done on paper, and not on a blackboard). The case was next referred to the state’s disciplinary board for review. That board, the Ohio Supreme Court Board of Professional Conduct, found Baker’s behavior to be “unquestionably inappropriate” — but the board stopped short of recommending the lawyer’s license be suspended. Finding that Baker was “unlikely to repeat his behavior,” the board found that what had already been done was enough; it recommended that the Ohio Supreme Court impose a public reprimand on Baker. 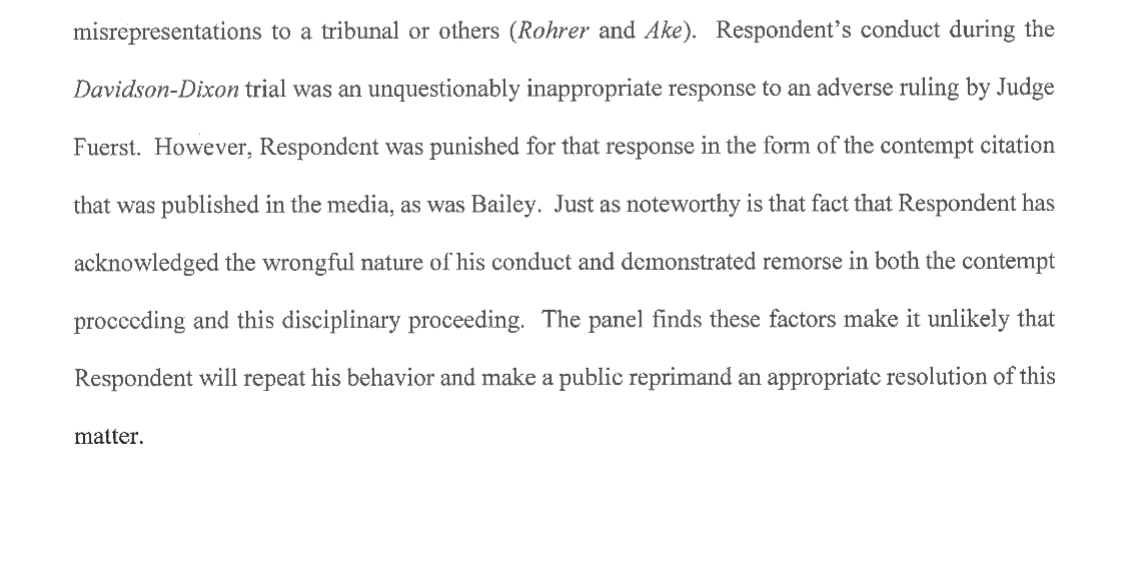 The matter now heads to the Ohio Supreme Court and its justices, which will likely carry out the board’s recommendation and issue a formal reprimand before closing the case.

Baker was remorseful as he told press,“As I’ve maintained throughout, what I did in the courtroom was not justified.” He added, however, “But I can’t back away from [thinking that] my client got an unfair trial because jurors weren’t able to consider self-defense.”