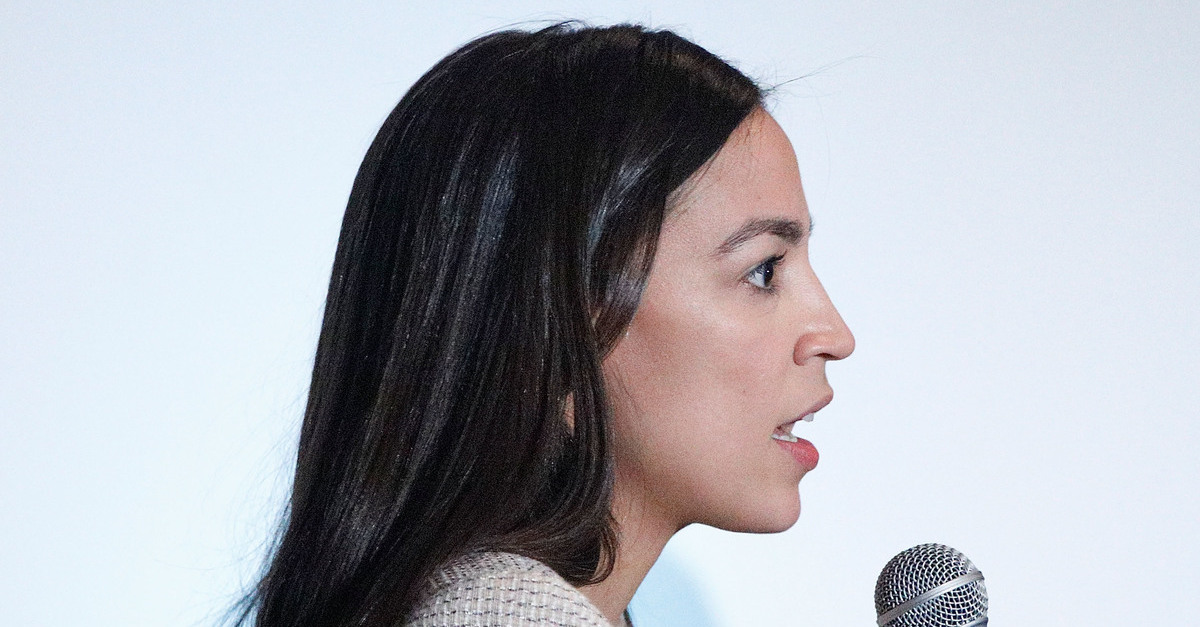 Rep. Alexandria Ocasio-Cortez (D-N.Y.) was slapped with a Federal Election Commission (FEC) complaint on Wednesday alleging that she and her campaign manager operated a stealth network of political action committees in order to evade campaign finance law.

According to Fox News, Ocasio-Cortez dismissed the FEC filing as both inconsequential and the work of a politically-motivated enemy.

“I mean, it’s conservative interest groups just filing bogus proposals,” she told the outlet when questioned about the complaint while en route to a meeting of the House Financial Services Committee.

Virginia-based attorney Dan Backer filed the complaint against Ocasio-Cortez, her chief of staff Saikat Chakrabarti, the Justice Democrats PAC, the Brand New Congress PAC and Brand New Congress LLC as a series of intermingling entities which attempted to “subsidize cheap assistance for Ocasio-Cortez and other candidates at rates far below market value.”

According to Federal Election Commission rules, campaigns are supposed to pay “fair market value” for all goods and services they use–a prohibition which otherwise “may result in a prohibited contribution from the corporation or labor organization.”

In this case, Backer alleges that the above-named political action committees were, in effect, subsidizing the Brand New Congress corporate entity.

Brand New Congress was started for the express purposes of fielding over 400 candidates and to “fully run all of their campaigns.” The effort always envisioned operating the company at a loss in a bid to keep those potential campaigns afloat–progressive challenges that otherwise wouldn’t have been able to afford the complicated campaign apparatus needed to compete at the federal level.

“To give some context, many of the founding members of Justice Democrats also helped start Brand New Congress in April of 2016,” the post reads. “At that time, the goal was not just to endorse existing candidates who have campaigns. Our goal with Brand New Congress was to recruit candidates who were not thinking about running already and to actually fully run all of their campaigns as if it was one big presidential race.”

In the ensuing paragraphs of the explanation, the confusing intricacies of campaign finance and so-called “dark money” are acknowledged–as well as the legal requirement that fair market rates are charged.

The ONLY way to do work for multiple candidates legally at this scale is to create an LLC and act as a vendor. For that reason, we created Brand New Congress, LLC. To keep things simple, we put all our staff in that LLC and had it act as the vendor for both the PAC and all the candidates. We had in our operating agreement that the goal of the LLC was not to make a profit, and as such, we made our prices as low as possible while still satisfying the FEC’s requirement that we are charging something reasonable because, again, if we weren’t we would essentially be doing heavily discounted work for candidates and that is illegal and immoral since fighting dark money is literally what we want to do.

Backer told Fox News that this unorthodox setup ran afoul of campaign finance laws. Backer previously filed another FEC complaint against Ocasio-Cortez, alleging that she “funneled at least $6,000 to her boyfriend through the Brand New Congress PAC.”

“Chakrabarti was trying to create the Uber for politics,” the attorney said. “Uber functions because of a massive subsidy from venture capital. Here, it’s subsidized by these PACs to deliver a valuable service that people need and want, but can’t be delivered at the real cost of it.”

It’s unclear, however, what exactly Brand New Congress LLC charged for its campaign services. Backer said that was part of the underlying concern because of the opaque nature of–and laws governing–LLCs themselves.

Paul Ryan is a campaign finance expert who works with the nonpartisan watchdog group Common Cause. In comments to Business Insider regarding a previous complaint filed against Ocasio-Cortez he suggested the problem–if any–was what’s required by law.

“More transparency when a campaign pays a consulting firm for work would be a great thing,” Ryan said. “We don’t have that information, as the public, because the law doesn’t require it. It’s not the case that we lack that information because these particular political players failed to comply with disclosure requirements.”

“In this case, it’s not clear there was any wrongdoing, and the allegations seem speculative,”Goldstone told Fox. “We haven’t seen evidence that the PACs improperly subsidized work for the campaign or have reason to believe that laws were broken.”

[image via Lars Niki/Getty Images for The Athena Film Festival]