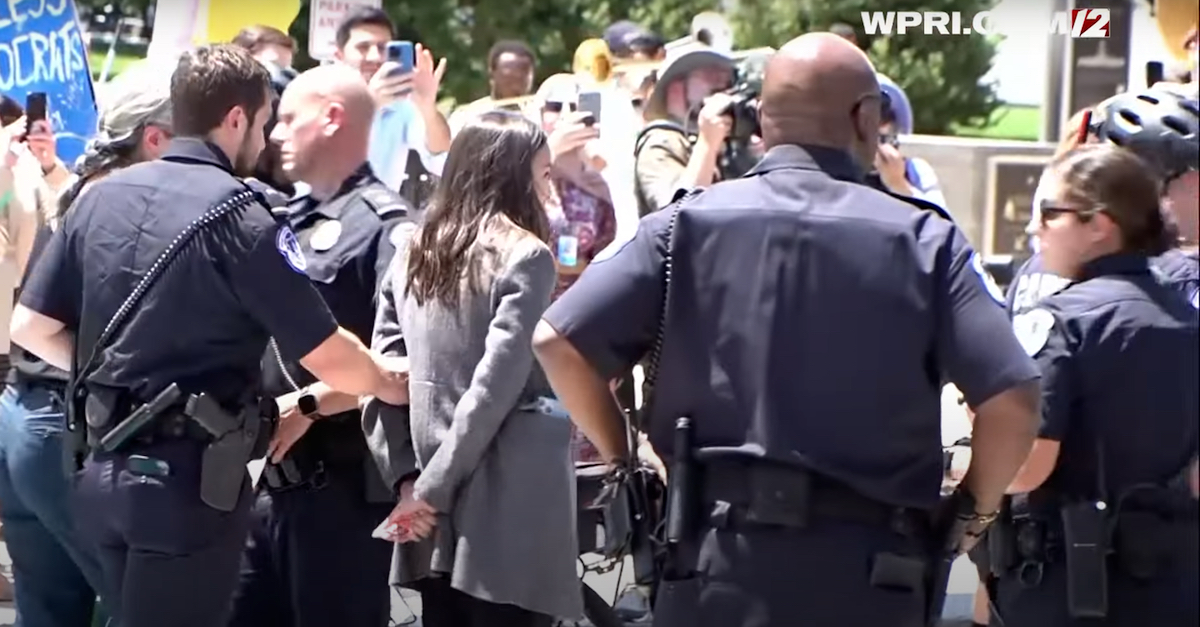 Rep. Alexandria Ocasio-Cortez (D-N.Y. 14) was not handcuffed as Capitol Police officers led her away from a street protest near the U.S. Supreme Court. (Image via WPRI-TV/YouTube screengrab.)

A group of 17 members of Congress were among a total of 35 people arrested in Washington, D.C. for protesting outside the U.S. Supreme Court building, the Capitol Police tweeted on Tuesday afternoon.

“Demonstrators are starting to block First Street, NE,” the Capitol Police said in the first of a string of tweets. “It is against the law to block traffic, so officers are going to give our standard three warnings before they start making arrests.”

Video from the scene showed a line of protesters sitting parallel to a crosswalk in the middle of a D.C. street.

We have already given our standard three warnings.

Some of the demonstrators are refusing to get out of the street, so we are starting to make arrests.

The demonstration is clear.

A Capitol Police press release said the incident began around 1:15 p.m. and that traffic resumed to its usual flow around 1:35 p.m.

“Today I was arrested while participating in a civil disobedience action with my fellow Members of Congress outside the Supreme Court,” Omar tweeted in a message not atypical of the others.  “I will continue to do everything in my power to raise the alarm about the assault on our reproductive rights!”

A predictable level of skepticism unattached to reality took hold among some echelons on Twitter, however. Some lampooned Ocasio-Cortez for placing her hands behind her back without being handcuffed, and others even went so far as to question whether she was actually under arrest at all.

Show us a picture of them being finger printed and booked. Otherwise you’re FOS!

Prove it. Where’s the mugshots of the arrested?

Nothing like pretending you’re under arrest when you’re not. Gotta leave it to AOC to play the optics game.

Her pretending to be handcuffed is just spectacular. https://t.co/UNJnWam1c5

First, it is unclear whether the officers asked the lawmakers to place their hands behind their backs when they were detained. (Officers can make the request to gain compliance or arrestees may simply do it to keep their hands visible and to show compliance to an officer leading them from behind — even when handcuffs are not employed.) Video from the scene recorded by news crews showed that several, but not all, of the other detainees placed their hands behind their backs as they were being led away.

Second, one can be arrested without being handcuffed, and many cases have noted that it does, in rare cases, occur: Brown v. Illinois (1975), Commonwealth v. Barnett (1978) in Pennsylvania, Jones v. Edwards (8th Cir. 1985), Washington v. Radka (2004), Schoenwetter v. Florida (2006) are examples. Some studies have questioned the need for handcuffs in all arrests. Some departments have promulgated mandatory handcuff rules; however, other police policies are entirely silent as to whether or not handcuffs are mandatory.

Third, and conversely, in some federal circuits, one can technically be handcuffed without being “under arrest.”

The U.S. Supreme Court reasoned in U.S. v. Grace (1983) that the sidewalks around the courthouse could not be subjected to anti-First Amendment legislation: “The public sidewalks forming the perimeter of the Supreme Court grounds, in our view, are public forums and should be treated as such for First Amendment purposes.” Streets are another matter, and here, the Capitol Police have alleged that the protesters were blocking traffic.

The specific charge under which the arrestees were taken into custody, per the Capitol Police, is “crowding, obstructing or incommoding” (D.C. Code § 22–1307). The charge is a misdemeanor punishable by not more than 90 days in jail and a fine of up to $500.

A full list of the names of those arrested has not yet been promulgated by the police.