Arrest of Ohio Man, 27, Appears to Confirm Story of a 10-Year-Old Girl Who Travelled to Indiana for Abortion Following Alleged Rape 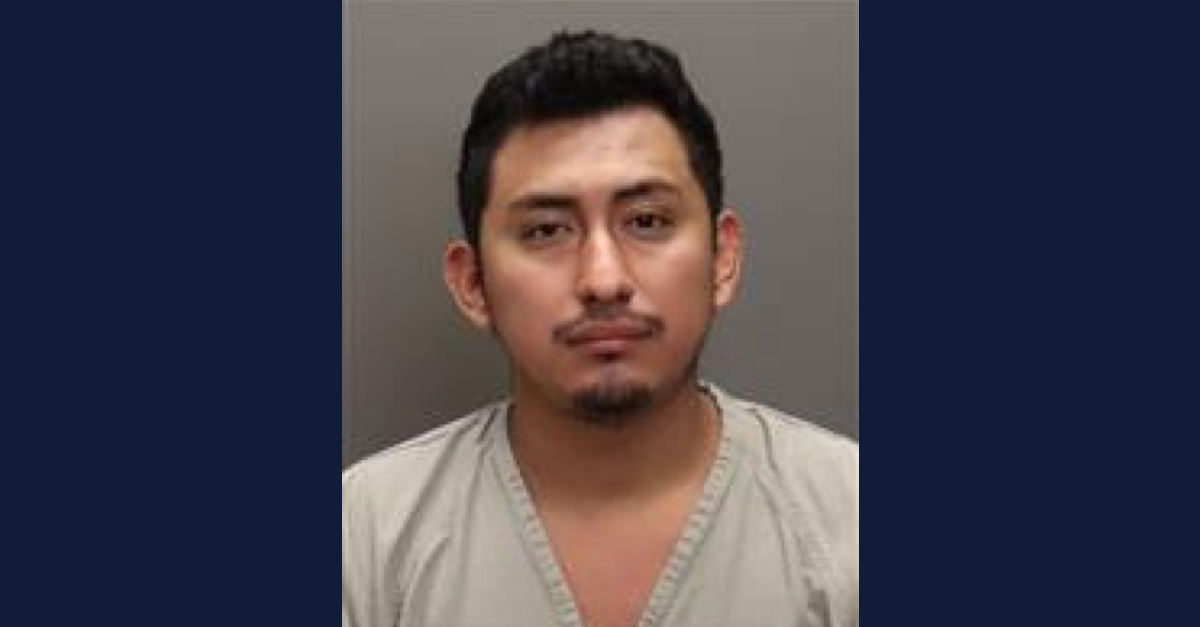 Court filings in Ohio appear to confirm reports that a pregnant 10-year-old girl could not obtain an abortion in her home state after allegedly being sexually assaulted. Instead, the girl travelled to neighboring Indiana in order to terminate the pregnancy — reportedly because of Ohio’s new abortion ban.

According to court documents obtained by Law&Crime, Gerson Fuentes, 27, is accused of rape of a person under 13 years of age in Franklin County, Ohio’s Municipal Court. He was arrested Tuesday and appeared in court on Wednesday. He is currently out of custody on $2 million bond and has been ordered to stay away from this alleged victim and her family.

A probable cause affidavit in support of Fuentes’ arrest indicates that the alleged assault took place on May 12. A police report was generated on June 22, listing the victim only as “HVN.”

On July 12, Ohio detectives Jeffrey Huhn and David Phillips served Fuentes with a warrant to obtain a buccal swab, the documents indicate.

“After obtaining the buccal swab Detectives brought Gerson Fuentes to police headquarters for an interview where he confessed to raping HVN,” the affidavit says. 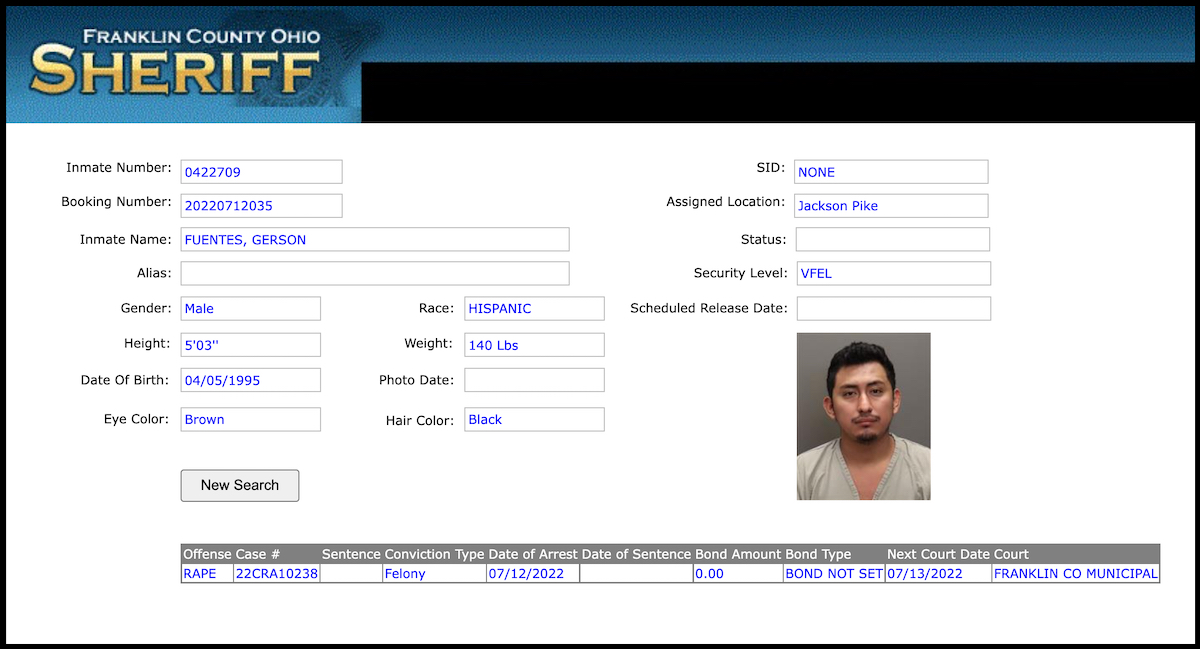 According to a report Wednesday in the Columbus Dispatch, Huhn testified at Fuentes’ arraignment, confirming that the girl received an abortion in Indianapolis on June 30. He also reportedly testified that DNA from the clinic in Indianapolis is being tested against samples from Fuentes and the victim’s siblings.

The girl’s story appears to be the same incident described in a Friday, July 1 story in the Indianapolis Star. In that story, which subsequently gained national attention, a doctor told a newspaper reporter several vague details about the girl’s case — and that the girl had to travel to Indiana because Ohio law bans abortions after six weeks. The girl was reportedly six weeks and three days pregnant.

I was the ONLY reporter in the courtroom this morning as the man accused of raping a 10-year-old girl, impregnating her, leading to an abortion in Indiana, was arraigned.

This confirms that the case exists.https://t.co/eWvtBMxqZW

The case catapulted to the forefront of the national abortion debate after President Joe Biden referenced the Star’s July 1 report in a subsequent speech.

“This isn’t some imagined horror,” Biden said when speaking about changes to abortion access during remarks on Friday, July 8. “It is already happening. Just last week, it was reported that a 10-year-old girl was a rape victim — 10 years old — and she was forced to have to travel out of state to Indiana to seek to terminate the pregnancy and maybe save her life.”

Biden’s comments were largely aimed at attempts by his administration to broaden abortion access in the wake of the Supreme Court’s decision in Dobbs v. Jackson Women’s Health Organization. That decision overruled Roe v. Wade and held that there is no constitutional right to choose an abortion. In the wake of Dobbs, states were left to chose on their own whether to allow or to ban the procedure — and what rules would apply.

Ohio’s anti-abortion measure contains no exceptions for cases of rape, incest, or fatal fetal anomalies, according to an analysis by The Cincinnati Enquirer.

The Indianapolis Star’s original report suggested that the 10-year-old victim needed to travel to Indiana to terminate the pregnancy because of Ohio’s new abortion restrictions.

The president’s policy goals — and his decision to address the case of the Ohio 10-year-old— were roundly criticized by conservative commentators and politicians who attempted to cast doubt on whether the case of the 10-year-old victim actually existed. 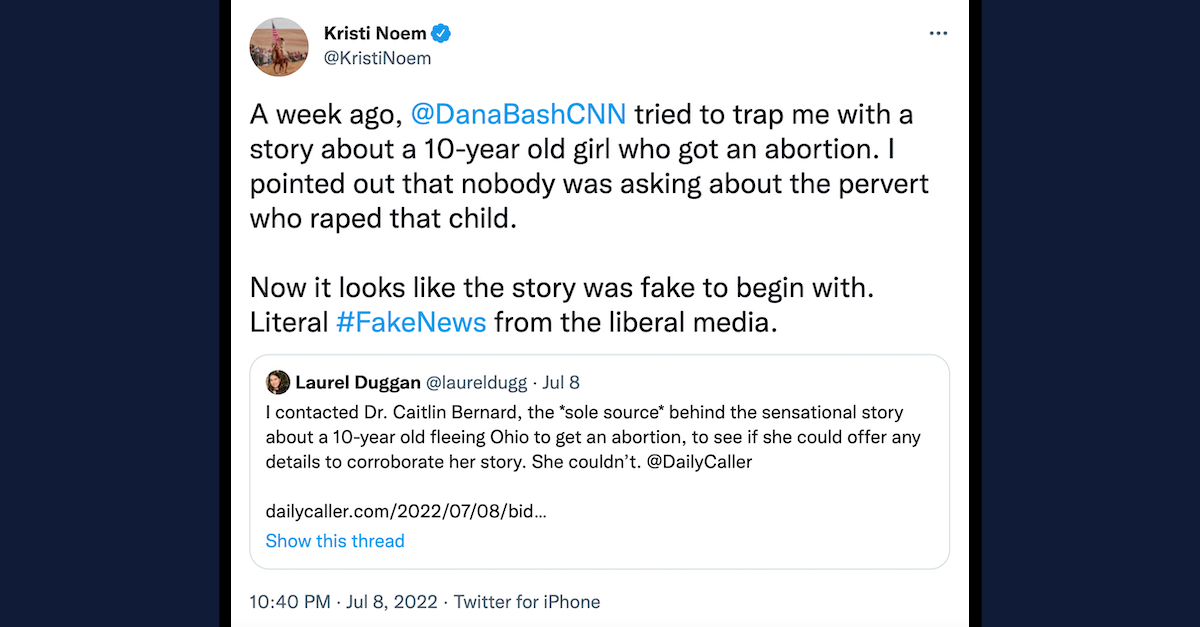 A tweet by South Dakota Gov. Kristi Noem (R), issued with a retweet of a writer from the conservative website ‘The Daily Caller,’ suggested that a newspaper story about a 10-year-old rape victim was ‘fake.’ A subsequent court proceeding in Ohio on Wednesday suggested otherwise.

Ohio Attorney General Dave Yost (R) appeared on Fox News on Monday, July 11, and told host Jesse Watters that he hadn’t heard of such a case as the one now alleged against Fuentes.

“Now, the doctor in Indiana isn’t in our jurisdiction, obviously,” Yost said. “We don’t know who the originating doctor in Ohio was — if they even exist. But the bottom line is it is a crime . . . It’s also the fact that in Ohio the rape of a 10-year-old means life in prison.”

Yost said on Monday that there was “not a whisper” of evidence that the rape and subsequent pregnancy occurred.

“I know our prosecutors and cops in this state, there’s not one of them that wouldn’t be turning over every rock in their jurisdiction if they had the slightest hint that this occurred,” Yost said on the 11th.

A statement from Yost’s office Wednesday praised police but was silent as to the girl’s abortion. It also did not offer a direct apology for casting at least some degree of doubt as to the facts of the matter.

“My heart aches for the pain suffered by this young child,” Yost said in the Wednesday, July 13 statement. “I am grateful for the diligent work of the Columbus Police Department in securing a confession and getting a rapist off the street.”

“Justice must be served and BCI stands ready to support law enforcement across Ohio putting these criminals behind bars,” the statement added.

Fuentes’ next appearance is set for July 22.

Read the complaint and probable cause affidavit below: