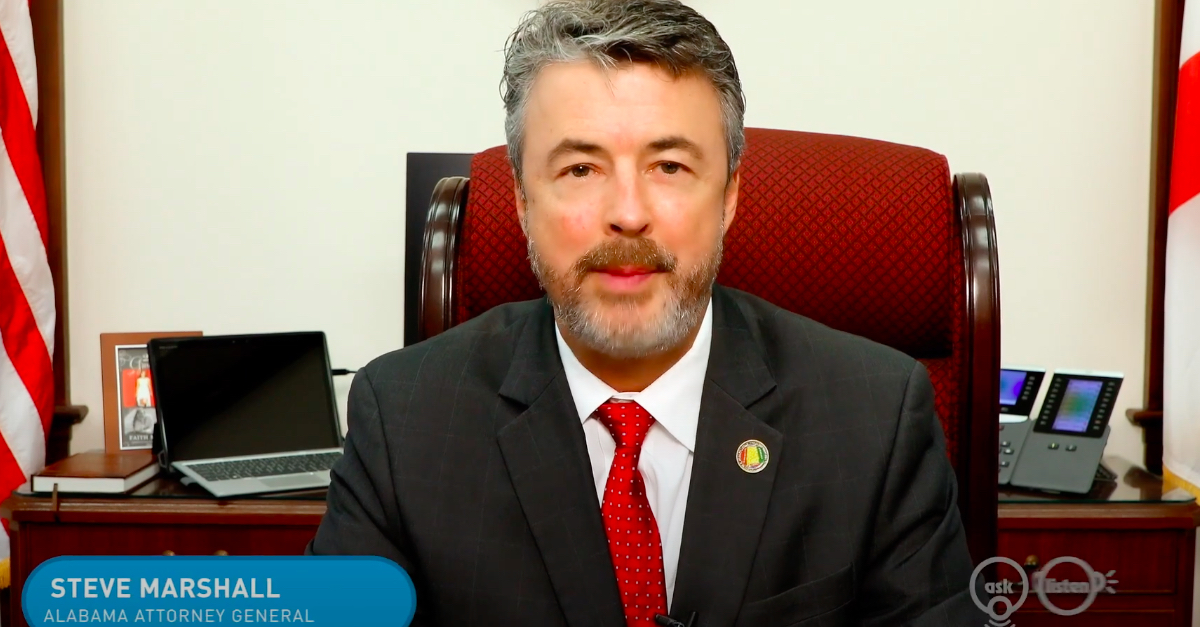 Alabama intends to criminally prosecute women who use abortion pills to terminate a pregnancy, using an old law adopted to protect children from cocaine and other drugs, the attorney general has announced.

The announcement fell just days after the FDA changed its regulations to make a commonly-used abortion pill far more accessible than it has ever been.

Alabama has a near-total ban on abortions called the Alabama Human Life Protection Act (AHLPA), which was signed into law by the state’s Republican governor Kay Ivey in 2019. At the time the law was adopted, it was unenforceable as an unconstitutional deprivation of liberty under the Supreme Court’s interpretation of the First Amendment in Roe v. Wade.

That changed in 2022 after the Supreme Court’s ruling in Dobbs v. Jackson Women’s Health Organization. Because AHLPA was a “trigger law,” it went into immediate effect when Roe v. Wade was overruled.

Dobbs did not make abortion illegal under federal law, but rather, lifted protection for abortion as a guaranteed right under the First Amendment. As a result, states are now free to adopt statutes that outlaw abortions altogether if they so choose. Alabama is one state that has chosen to ban nearly all abortions; immediately after the Dobbs ruling, Alabama’s three abortion clinics shut down, leaving no access to clinic-performed abortions within the state.

On Jan. 3. 2023, the federal Food and Drug Administration (FDA) made a significant change to its regulations: the agency announced on its website that mifepristone is now permitted to be dispensed at retail pharmacies. The change is a meaningful one, particularly for individuals who reside in states without abortion clinics.

Mifepristone, also known as RU-486, is the first pill in a commonly-used two-medication abortion regimen (the other medication is Misoprostol, which is less restricted due to its non-abortion usage). Prior to the FDA’s change, Mifepristone was only available if dispensed by a specialty pharmacy or clinic. Now, the medication is available (with a valid prescription) both in-store at retail pharmacies and via mail.

In Alabama, though, filling a Mifepristone prescription through the mail can amount to a serious crime.

Alabama law prohibits abortions at any time after conception, with no exception for pregnancies that are the result of rape or incest (but with limited exceptions for cases in which a fetus has a lethal anomaly or in which there is a serious health risk posed to the mother). The act provides for prison sentences up to 99 years for the person who performs an illegal abortion.

The text of the law is clear that its targets are those who perform abortions — and not those who receive abortions: “Section 5. No woman upon whom an abortion is performed or attempted to be performed shall be criminally or civilly liable.”

On Tuesday, however, Alabama Attorney General Steve Marshall (R) announced his office’s thoughts on prosecuting women for having abortions. Despite AHLPA’s pledge that “no woman” who receives an abortion will be prosecuted for doing so, Marshall said he may indeed prosecute women for ending their own pregnancies. The attorney general explained that these prosecutions would rely on the interpretation of a different, older state statute that was meant to protect children from illegal drugs.

The 2006 Chemical Endangerment of a Child law makes it a felony if a person “knowingly, recklessly, or intentionally causes or permits a child to be exposed to, to ingest or inhale, or to have contact with a controlled substance, chemical substance, or drug paraphernalia.” The statute was originally adopted to shield children from meth labs. Marshall said he plans to use the law to prosecute women for using abortion pills.

Marshall provided an email statement to press in which he acknowledged that, “The Human Life Protection Act targets abortion providers, exempting women ‘upon whom an abortion is performed or attempted to be performed’ from liability under the law.” However, Marshall added a warning about the abortion ban: “It does not provide an across-the-board exemption from all criminal laws, including the chemical-endangerment law—which the Alabama Supreme Court has affirmed and reaffirmed protects unborn children.”

As Marshall indicated, Chemical Endangerment of a Child has been interpreted to include protection of “unborn children.” In 2013, the highest court in Alabama ruled that “the plain meaning of the word ‘child’ in the chemical endangerment statute includes unborn children.”

However, the case in which the court did so was not about abortions, but about a pregnant woman who used cocaine during her pregnancy. The woman used multiple illegal drugs while pregnant and later gave birth to a child that died almost immediately from methamphetamine intoxication.

Marshall’s statement suggests that mifepristone use could be viewed in just the same way. Such an interpretation is almost certain to face legal challenge.

Emma Roth, a staff attorney at the advocacy group Pregnancy Justice, told AL.com that her group “stands ready to challenge any attempt to expand the chemical endangerment statute to criminalize the use of abortion medication.”