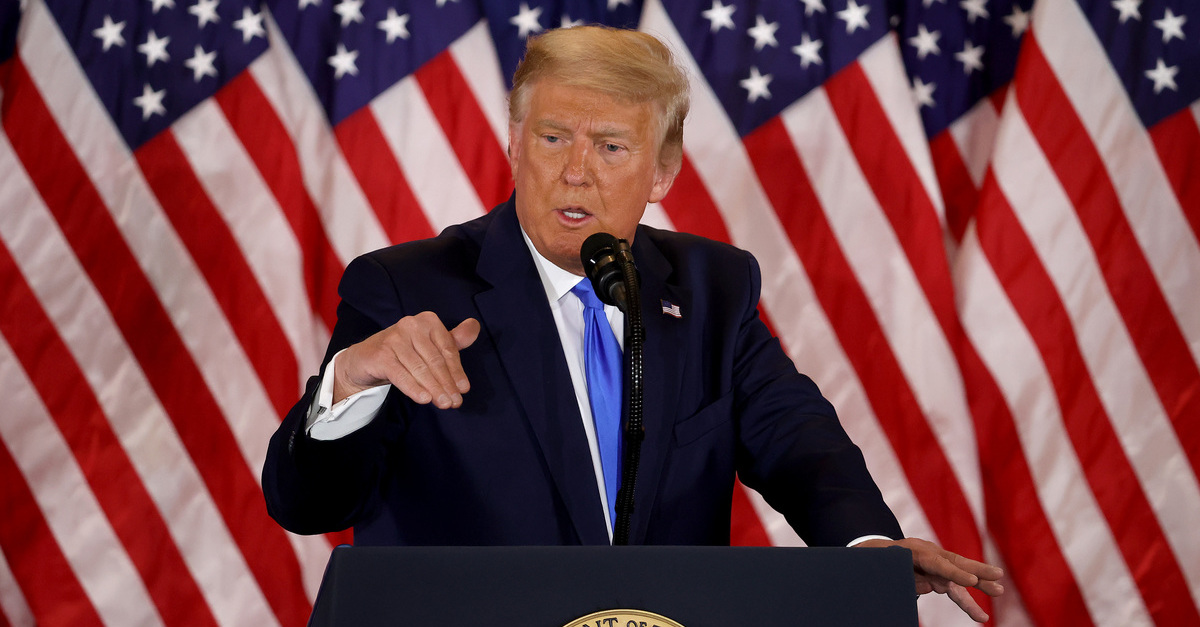 U.S. President Donald Trump speaks on election night in the East Room of the White House in the early morning hours of November 04, 2020 in Washington, DC. Trump spoke shortly after 2am with the presidential race against Democratic presidential nominee Joe Biden still too close to call.

The day after Election Day showed former Vice President Joe Biden leading President Donald Trump by slim but substantial margins in several key states needed to win the White House. The narrowing path to re-election has prompted Trump’s campaign to take the matter to the courts, whether through recounts or other legal challenges promised and, in some cases, delivered.

On Wednesday, Trump campaign manager Bill Stepien said the less-than-1-percent differential in Wisconsin landed comfortably in “recount territory,” shortly before news organizations pronounced Biden the winner in the preliminary (non-certified) count. The Biden campaign expressed confidence that their lead would hold, no matter how many times it was tallied. (For more on the Badger State’s recount laws, see Law&Crime’s previous reporting here.)

With Biden ahead in both Nevada and Michigan by press time, Trump has been clutching onto a narrowing lead in Georgia, where the secretary of state estimated 200,000 ballots remain to be counted in a race separated by merely tens of thousands of votes. All three of those states are currently on the razor’s edge and could eventually hinge upon recounts initiated by one campaign or another.

Here are the relevant laws for three states that are perhaps most likely at this stage, outside of Wisconsin, to be targeted by calls for recounts.

Nevada law contains a “right to recount” for a tie vote, which while not particularly likely, is somewhat illustrative of how recounts are viewed generally in the Silver State. Any candidate can request a recount, regardless of the margin separating themselves from their nearest opponent. (As of this writing, Biden is ahead of Trump by roughly 8,000 votes.)

A candidate defeated at any election may demand and receive a recount of the vote for the office for which he or she is a candidate to determine the number of votes received for the candidate and the number of votes received for the person who won the election if, within 3 working days after the canvass of the vote and the certification by the county clerk or city clerk of the abstract of votes, the candidate who demands the recount:
(a) Files in writing a demand with the officer with whom the candidate filed his or her declaration of candidacy; and
(b) Deposits in advance the estimated costs of the recount with that officer….

Here, Trump has three days to request a recount starting from the date the vote is canvassed and certified.

The specific procedures are quite lengthy:

Once initiated, the entire recount process must generally be competed within 10 days; the government has five days to begin the count and then five days from that date to finish the count. The cost of the recount always initially falls on the candidate or campaign requesting the effort, and those costs are determined by the secretary of state. If the party that requests the recount overturns the original result, then those costs are refunded.

Michigan law mandates an automatic recount if the margin between candidates is 2,000 votes or less, but that’s unlikely to be the situation here.

Trump can easily request a recount, full or partial, if he makes the case that he was “aggrieved on account of fraud or mistake in the canvass of the votes.” But when making the fraud argument, the Wolverine State does not necessarily require any evidence or even any specific allegations.

According to the statute, a candidate may petition or a recount if:

The petition alleges that the candidate is aggrieved on account of fraud or mistake in the canvass of the votes by the inspectors of election or the returns made by the inspectors of election, or by a board of county canvassers or the board of state canvassers. The candidate must be able to allege a good-faith belief that but for fraud or mistake, the candidate would have had a reasonable chance of winning the election. The petition must contain specific allegations of wrongdoing only if evidence of that wrongdoing is available to the petitioner. If evidence of wrongdoing is not available, the petitioner is only required to allege fraud or a mistake in the petition without further specification.

Similar to Nevada, a recount must be requested within a tight time frame following the initial ballot canvassing and certification–48 hours. The deadline for completion of a recount in Michigan is quite a bit lengthier–30 days. Costs in Michigan are minuscule–$25 per precinct requested–but also must be borne by the requesting party. Again, if the recount requester wins and overturns the initial result, their deposit is refunded.

Here’s how the basic process begins there:

The secretary of state, upon receipt of any such petition for recount, shall immediately notify the county clerk of each county in which are located any precincts included in such petition for recount that a petition for such recount by the board of state canvassers has been filed and the ballots for such precincts shall be carefully preserved. Ballots and boxes shall remain in the possession of city or township clerks until requisitioned by the canvass board. The board of state canvassers, at as early a date as possible after the receipt of such petition and the deposit required, shall investigate the facts set forth in said petition and cause a recount of the votes cast in the several precincts included in the petition.

Additional details are available here. The state also has lengthy procedures for how to contest recount petitions. Oh, and anyone who interferes with a recount in Michigan is presumed to be guilty of a felony.

Georgia law provides various options for recounts that might be taken advantage of by Trump or Biden–but also, perhaps counter-intuitively, some of the most stringent standards for beginning the recount process of any state surveyed in this explainer.

In the Peach State, a candidate is only allowed to request a recount if the ultimate margin separating them from their nearest challenger is less than”one-half of 1 percent of the total votes cast.” As of this writing, Trump is ahead of Biden by one percentage point–roughly 80,000 ballots–with numerous votes in Biden-friendly areas still left to be counted.

Similar to both Nevada and Michigan, the time frame for initiating the recount process requires quick legal action; a requesting party has “two business days following the certification of the election results” to file the paperwork necessary and must be “made in writing by the losing candidate.” At this point, that looks like Biden.

“If the office sought is a federal or state office voted upon by the electors of more than one county, the request shall be made to the Secretary of State who shall direct that the recount be performed in all counties in which electors voted for such office and notify the superintendents of the several counties involved of the request,” the statute notes.

Additionally, a candidate who feels that they have been wronged by the process has another avenue to request a recount. This section would obviously be most likely to apply to Trump.

Any other provision of this Code section to the contrary notwithstanding, a candidate for a federal or state office voted upon by the electors of more than one county may petition the Secretary of State for a recount or recanvass of votes, as appropriate, when it appears that a discrepancy or error, although not apparent on the face of the returns, has been made.

Unlike Michigan, for instance, a recount requested due to an alleged error is not simply available to anyone complaining about, say, fraud.

Here, the discretion to initiate such a recount rests with the Secretary of State. In Georgia that’s Brad Raffensperger, a Republican, so the possibility cannot be foreclosed against. But, again, the standard in Georgia is much higher; a candidate or campaign would actually have to allege specific facts. Again, the statute:

The petition pursuant to this Code section shall be in writing and signed by the person or persons requesting the recount or recanvass. A petition shall set forth the discrepancies or errors and any evidence in support of the petitioner’s request for a recount or recanvass and shall be verified. The Secretary of State may require the petitioner or other persons to furnish additional information concerning the apparent discrepancies or errors in the counting or canvassing of votes.

Under Georgia’s election rules, recounts are conducted by feeding ballots into optical scanners. Only a court order can provide a hand recount.