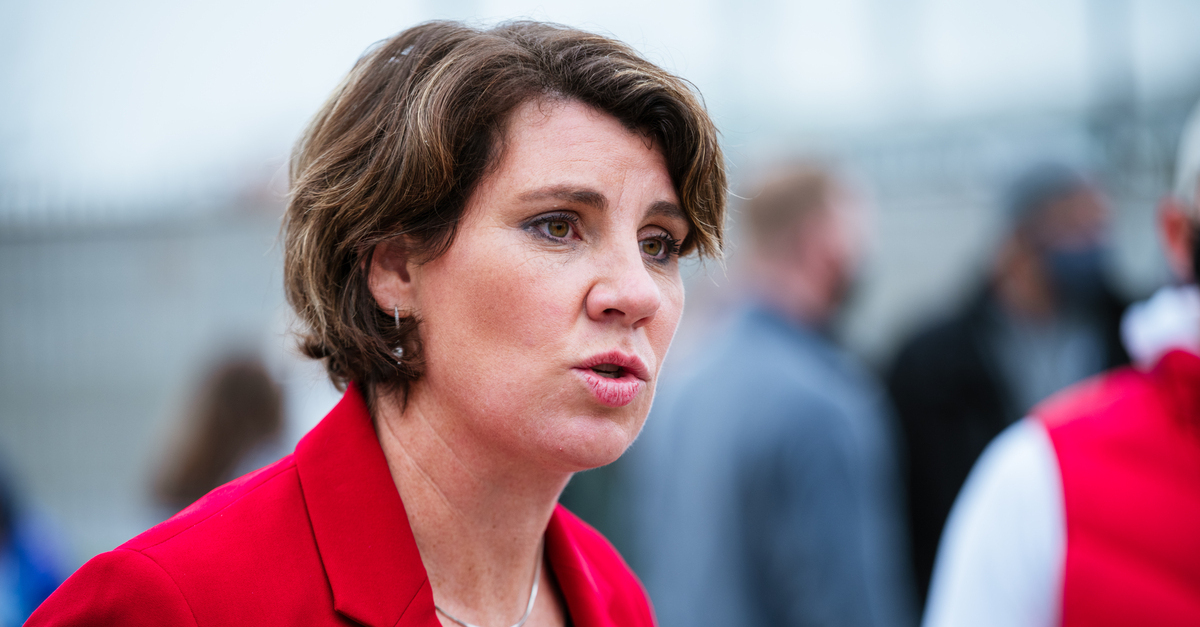 The Senate campaign of twice-failed candidate Amy McGrath illegally coordinated with a Democratic Party Super PAC in violation of federal campaign finance law, according to a complaint recently filed with the Federal Election Commission (FEC).

Submitted with the gridlocked federal campaign spending oversight board by non-partisan, public interest watchdog the Campaign Legal Center (CLC) late Wednesday, the group on Thursday announced that McGrath’s campaign–along with the Senate campaign of Democrat Mike Espy–had violated federal law during the 2020 election.

“Super PACs are not supposed to act as arms of campaigns,” CLC said in a press release. “The FEC should make that clear by enforcing the law here. To reduce political corruption, we need real transparency about who is spending big money on elections so that politicians can no longer receive unlimited secret money from wealthy special interests to support their campaigns.”

According to CLC’s 161-page complaint and supporting exhibits, McGrath’s campaign and the Ditch Fund illegally coordinated on up to $8 million worth of spending during her unsuccessful bid to unseat Sen. Majority Leader Mitch McConnell (R-Ky.).

Meanwhile, Espy’s failed effort at replacing pro-lynching Sen. Cindy Hyde Smith (R-Miss.) allegedly violated federal law by coordinating with the March On PAC to the tune of some $50,000 according to a separate, 281-page complaint and supporting exhibits.

The two complaints center around spending decisions signed off on by Catherine Herrick, the president and founder of “targeted media placement” firm Buying Time LLC. According to the watchdog, Buying Time also has a “functional alter ego” in the form of the shell company known as Targeted Platform Media LLC–the latter of which appears to have been used to dodge and violate federal law.

“Buying Time and TPM are effectively indistinguishable because both are associated with the same address, share the same phone and fax number, and are headed by the same person, Catherine Herrick,” the McGrath complaint explains. “TPM appears to be an alter ego of Buying Time: whereas Buying Time is an established media firm with a website and several employees, TPM only has a shell of a website listing Buying Time’s phone and fax number, and TPM corporate records show a ‘@buying-time.com’ email contact for its registered agent Herrick, whose address is listed at Buying Time’s offices.”

CLC’s complaint applies the law to the conduct:

This evidence indicates that Buying Time/TPM made use of its knowledge about the McGrath campaign’s “plans, projects, activities or needs” to most effectively place Ditch Fund’s ads supporting McGrath, and that such information was “material to the creation, production, [and] distribution of the communication[s].”11 C.F.R.§ 109.21(d)(4). This inference is strengthened by the fact that the ad purchases follow a pattern, where both Ditch Fund and the McGrath campaign purchased ads on the same stations, during overlapping or complementary periods. The patterns suggest that Buying Time/TPM helped Ditch Fund execute a strategy that was complementary to and coordinated with the McGrath campaign.

FEC regulations prohibit coordination between candidates for federal office and outside spending groups–including a communication that is “paid for, in whole or in part, by a person other than that candidate, authorized committee, or political party committee,” so long as said communication is in service of “electioneering” and “is created, produced, or distributed at the request or suggestion of a candidate, authorized committee, or political party committee.”

The federal election code notes that “regulations shall not require agreement or formal collaboration to establish coordination.”

In other words, CLC is accusing the relevant parties of unlawfully coordinating their spending decisions by pointing out that the same media executive was–as documented by the FCC–working with both the outside spending groups and campaigns in question.

The Espy complaint documents substantially similar activity by Herrick on behalf of the Espy campaign and the March On PAC that supported him. To wit, Herrick signed off on ad spending decisions for both entities “when placing the ads.”

From the Espy complaint:

March On PAC made up to $50,000 in illegal, unreported, and excessive in-kind contributions to the Mike Espy for Senate Campaign Committee in the form of coordinated communications, 11 C.F.R. §109.21, in violation of FECA’s source prohibitions, reporting requirements, and contribution limits.

Specifically, the complaints allege one count each of making illegal and excessive in-kind contributions to each candidate’s campaign and of unlawfully failing to report those contributions.

Law&Crime reached out to both of the Democratic Party Super PACs and Buying Time for comment on this story but no response was forthcoming at the time of publication.

“Super PACs can only raise and spend unlimited amounts if they are completely independent of the campaigns they support. When the same person is placing ads for both a super PAC and the candidate that super PAC supports, then the super PAC’s spending is not at all independent, as required by law,” said Brendan Fischer, federal reform director for CLC. “A vendor cannot possibly separate its work for a super PAC from its work for a campaign when the same person is placing ads for both—an employee cannot create a firewall inside their own head.”