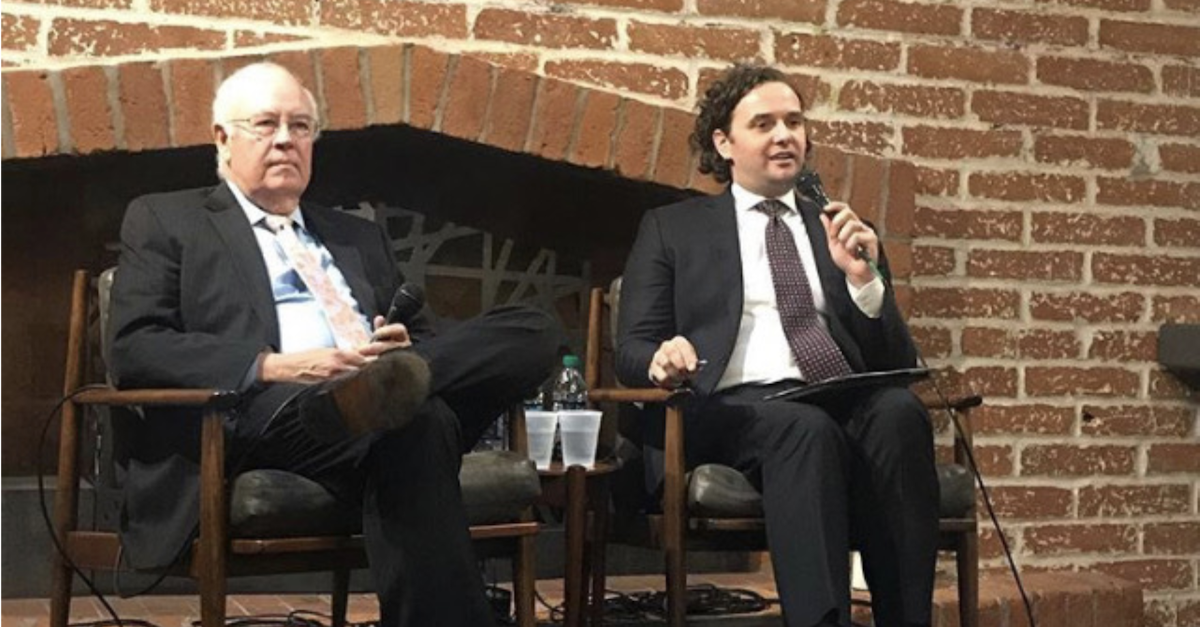 The Trump campaign’s attorney Kory Langhofer shared a stage with former Independent Counsel Ken Starr during a March 2018 discussion at a Federalist Society event in Phoenix.

The Trump campaign’s effort to ride the “Sharpiegate” conspiracy to judicial victory from the jaws of electoral defeat quickly crumbled. First, their stacks of hundreds of sketchy affidavits were rejected, and a brutal daylong hearing on Thursday led the legal team to abandon the case on Friday.

The speedy and at times embarrassing manner in which the case fell apart has called attention to the Trump campaign’s attorney Kory Langhofer, who took the lead on the lawsuit after Arizona’s largest law firm Snell & Wilmer withdrew. And Langhofer has a history in the Grand Canyon State.

In 2018, an Arizona appellate court’s three-judge panel slapped Langhofer with nearly $150,000 in sanctions for filing “frivolous” litigation in a you-can’t-make-this-up case featuring medical cannabis cultivation and a town called Snowflake.

“There is no public interest in a frivolous lawsuit, and discouraging groundless litigation is what the legislature intended,” Judge Jennifer B. Campbell, from the Arizona Court of Appeals, Division One and wife of the state’s chief justice, wrote in a 10-page ruling two years ago.

Neither of her colleagues, Judges Paul J. McMurdie and Peter B. Swann, disagreed, nor did Arizona’s Republican-majority Supreme Court, which declined to review the case in May 2019.

It’s also a story about scandal that may have knocked Langhofer off of President Donald Trump’s shortlist for federal judges. Langhofer is a longtime Republican political operative whose website boasts of his having represented the likes of Mitt Romney and Carly Fiorina.

Swooping into the small town of Snowflake, Arizona — with a population of less than 6,000 people — Langhofer tried to block the hamlet from issuing a limited liability company called Copperstate Farms LLC a special use permit to use existing greenhouses for marijuana cultivation. He led the town’s residents in opposing that effort under the banner of his law firm Statecraft PLLC, but he quickly stumbled on the trial court level.

“The superior court also found that Statecraft pursued the action in bad faith,” the appellate court ruling summarized. “The court reasoned that sufficient evidence demonstrated that Statecraft knew the claims argued on behalf of the residents ‘depended on facts not present… and on legal arguments that cannot be made in good faith in [Arizona].'”

Langhofer appears to have been playing both sides of the cannabis issue. Snowflake approved their medical marijuana plans in June 2016, only to be opposed by Langhofer, who filed a separate lawsuit in support of the Campaign to Regulate Marijuana Like Alcohol that August. The latter group was in the midst of a legalization campaign known as Prop. 205.

Law&Crime spoke to Snowflake’s former Mayor Tom Poscharsky about the episode in a phone interview.

“He’s been a member of the Federalist Group and then a conservative Republican lawyer, as best I can tell—I keep track of them—ever since we had our encounter in 2016,” Poscharsky noted.

“This morning we sent a letter to Congress concerning the unauthorized sharing of private and transition emails with the Mueller team,” Langhofer was quoted telling the Washington Post in late 2017, referring to thousands of emails the General Services Administration had shared with the special counsel.

“I sent materials to our local representatives to inform them that basically he had been found by a judge to have instigated a frivolous action,” Poscharsky said.

Langhofer never did get that federal judgeship, but he did get to lead the Trump campaign’s efforts in contesting the results of Arizona’s presidential election, which were in President-elect Joe Biden’s favor. He took over the case once Arizona’s largest law firm Snell & Wilmer called it quits.

Consulting with Langhofer on the case was Trump’s former Attorney General Matthew Whitaker, who previously was a board member in a company that the Federal Trade Commission found to be a “scam.”

Once becoming the lead attorney, Langhofer quickly backtracked from the original complaint’s broad allegations that “Sharpiegate” had disenfranchised Trump supporters. The Trump campaign instead focused on so-called “marking device” irregularities. Then, after the case went to oral arguments, Langhofer revised the theory of the case again mid-hearing, calling Sharpies irrelevant to the lawsuit despite their explicit mention in court papers.

Eventually, Langhofer told Judge Daniel Kiley directly: “This is not a fraud case.”

“It is not a stealing-the-election case,” Langhofer added on Thursday, going sharply off-message with the White House by repackaging tall tales of conspiracy as an effort to expose innocent flaws in Maricopa County’s voting system.

To support those more modest claims, Langhofer called a business partner to the witness stand: Zack Alcyone–who just so happened to be the co-founder of petition analysis company Signafide, a fact that the Arizona Democratic Party’s attorney had to elicit on the witness stand on cross-examination.

Langhofer did not immediately respond to Law&Crime’s email requesting comment.

In the end, even Langhofer’s radically trimmed claims fell apart upon scrutiny. He eventually conceded that only 191 ballots were at issue in the case, far below Biden’s commanding lead of more than 11,000 votes. The Republican lawyer and operative declared their claims about the presidential race moot on Friday morning.

At a 10-minute hearing in the afternoon, Langhofer added that court intervention would not be necessary in Arizona’s downballot races either. Judge Kiley dismissed the case with prejudice, and Langhofer’s more cautious litigation posture helped him avoid the fate that befell him two years ago.

The Statecraft PLLC v. Town of Snowflake filing is below: