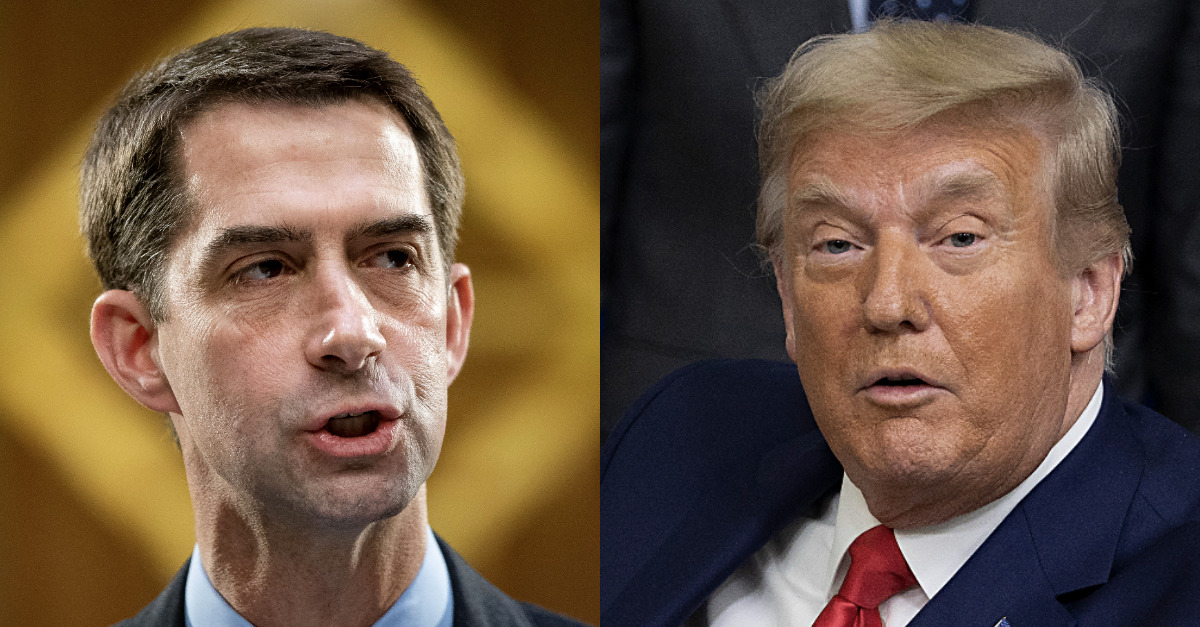 Outgoing President Donald Trump’s onslaught against members of his party resisting his efforts to overturn the 2020 election has found a new target: Senator Tom Cotton, an Arkansas Republican whose reservations about the scheme had less to do with preserving the peaceful transfer of power than avoiding an exercise in futility.

“I’m grateful for what the president accomplished over the past four years, which is why I campaigned vigorously for his reelection,” Cotton wrote in a press release on Sunday. “But objecting to certified electoral votes won’t give him a second term—it will only embolden those Democrats who want to erode further our system of constitutional government.”

A far-right hawk with one of the widest wingspans in Congress, Cotton’s demurral could not have been more accommodating to Trump. The senator’s comments paid lip service to unfounded allegations of voting irregularities and based his decision on not giving newly empowered Democrats another reason to abolish the Electoral College, leaving majority rule in a country where they dominate the popular vote.

The easy let-down did not avert Cotton’s inevitable dressing down by Trump.

“How can you certify an election when the numbers being certified are verifiably WRONG,” the 45th president tweeted on Monday. “You will see the real numbers tonight during my speech, but especially on JANUARY 6th. @SenTomCotton Republicans have pluses & minuses, but one thing is sure, THEY NEVER FORGET!”

How can you certify an election when the numbers being certified are verifiably WRONG. You will see the real numbers tonight during my speech, but especially on JANUARY 6th

@SenTomCotton Republicans have pluses & minuses, but one thing is sure, THEY NEVER FORGET!

The tweet by the book-averse president perhaps unintentionally recalled Rudyard Kipling’s All the Mowgli Stories, in which an elephant named Hathi introduced a classic line into the Western cultural vocabulary: “an elephant never forgets.”

Fellow literary giant Dorothy Parker drolly observed that women do not forget either—and neither, apparently, does the scornful loser of this year’s presidential election, lashing out at any Republican refusing to endorse his desperate attempts to cling to power.

Recall: Trump is currently promoting an effort to overturn the results of the 2020 election led by Rep. Mo Brooks (R-Ala.) in the U.S. House of Representatives and by Senators Josh Hawley (R-Mo.) and Ted Cruz (R-Tex.) in the upper chamber, which is currently supported by the majority of the GOP members of the 117th U.S. Congress.

Widely perceived as being doomed to fail, the Trump loyalists’ effort has been called a political stunt pursued by adherents who arguably know that their machinations will ultimately fail to keep Trump in office. Still, objections to Joe Biden’s Electoral College win—which follows, some say abuses, the legal process envisioned by the Electoral Count Act of 1887—is increasingly viewed as both a badge of honor and test of loyalty for many denizens of Trumpworld.

The law itself provides, in relevant part:

The lame duck president reportedly views this effort (often described by critics and analysts as an attempted coup d’etat despite the statutory basis on which the objections are being raised) and other closely-related but similarly sure-to-fail death rattles against Biden’s legitimacy as the stuff of personal enrichment and therefore highly beneficial to him and his stature among the MAGA set.

Opposition to the Brooks-Hawley-Cruz plan could be politically costly for Republicans. Those who refuse to toe the line are likely to see themselves subject to Trump’s famous fits of pique and ire, after which point they will be seen as insufficiently loyal—or worse—by the president’s voters.

Cotton is a prime example of the danger here.

While endorsing the GOP’s never-once-substantiated party line about “irregularities in the presidential election,” the conservative firebrand said the effort was likely to backfire on Republicans by giving ammunition to opponents of the antiquated Electoral College system.

That argument went as follows [emphasis ours]

If Congress purported to overturn the results of the Electoral College, it would not only exceed that power, but also establish unwise precedents. First, Congress would take away the power to choose the president from the people, which would essentially end presidential elections and place that power in the hands of whichever party controls Congress. Second, Congress would imperil the Electoral College, which gives small states like Arkansas a voice in presidential elections. Democrats could achieve their longstanding goal of eliminating the Electoral College in effect by refusing to count electoral votes in the future for a Republican president-elect. Third, Congress would take another big step toward federalizing election law, another longstanding Democratic priority that Republicans have consistently opposed.

In usual fashion, Trump lambasted the Arkansas Republican’s perceived lack of fidelity to the lost cause, invoking an extended metaphor about the memory of certain pachyderms who have, since around 1874, come to symbolize the Republican Party.

A brief tweetstorm ensued–spurned on by Cotton’s rejection of the long-shot, last-ditch plan–in which the president praised his Senate enablers while excoriating those who refuse to contest the vote:

“We are not acting to thwart the Democratic process, we are acting to protect it.” @SenRonJohnson

The “Surrender Caucus” within the Republican Party will go down in infamy as weak and ineffective “guardians” of our Nation, who were willing to accept the certification of fraudulent presidential numbers!

Cotton was praised by the Washington Post‘s Aaron Blake for breaking with Trump.

“The statement was as significant for its argument as it was for the source of it: a very conservative senator who, much like [Ted] Cruz and [Josh] Hawley, is in line for a presidential run in the near future,” the Post analyst wrote. “The fact that someone such as Cotton would decline to go along with the charade undermines the charade itself and would seem to give other conservatives cover to back off it.”

While Beltway media approval could, perhaps, help rehabilitate Cotton’s image with Never Trumpers from Lincoln Project et al. and to center-left commentators on MSNBC, it is a risky way to foam the runway for his oft-rumored 2024 presidential bid in a party that still is—and may be for the foreseeable future be—defined by Trump.