The complaint, filed by watchdog group The Campaign Legal Center in Oct. 2016, was updated on Friday with “additional evidence in the form of newly published emails and other documents from the 2016 election.” More than 700 pages of Cambridge Analytica documents were dumped online.

A summary of the evidence contained therein:

A never-before-published 27-page post-election report from February 2017 shows that Cambridge Analytica claimed credit for creating, producing, and distributing ads for the Trump campaign, which included “5,000+ ad campaigns” on behalf of Trump that generated “1.5 billion impressions.” According to Cambridge Analytica, its pro-Trump “persuasion” ads corresponded with a 3% average favorability increase for Trump and get-out-the-vote ads “drove a 2% increase in voters submitting absentee ballots.”

At the same time that Cambridge Analytica was producing the Trump campaign’s own ads, it was also conducting polling and developing “all of the creative” for the supposedly independent pro-Trump super PAC, Make America Number 1 (also known as “Defeat Crooked Hillary”). For example, in the final days of the 2016 election, Cambridge Analytica targeted Michigan with “72 hour voter turnout” videos on behalf of the super PAC that generated 6 million impressions; according to Cambridge Analytica, “If [the super PAC] had not made the final GOTV investment in the state, we can reasonably argue Trump would not have achieved his historic victory in Michigan.”

Cambridge Analytica was described as the “conduit” between the Trump campaign and the Make America Number 1 PAC.

“These materials further establish how Cambridge Analytica functioned as a conduit for unlawful coordination between Make America Number 1 and the 2016 Trump campaign,” the complaint went on. “Internal Cambridge Analytica documents additionally show a shared ‘project calendar’ that jointly listed both the Trump and MAN1 accounts.”

The shared “project calendar” was submitted as Exhibit L. 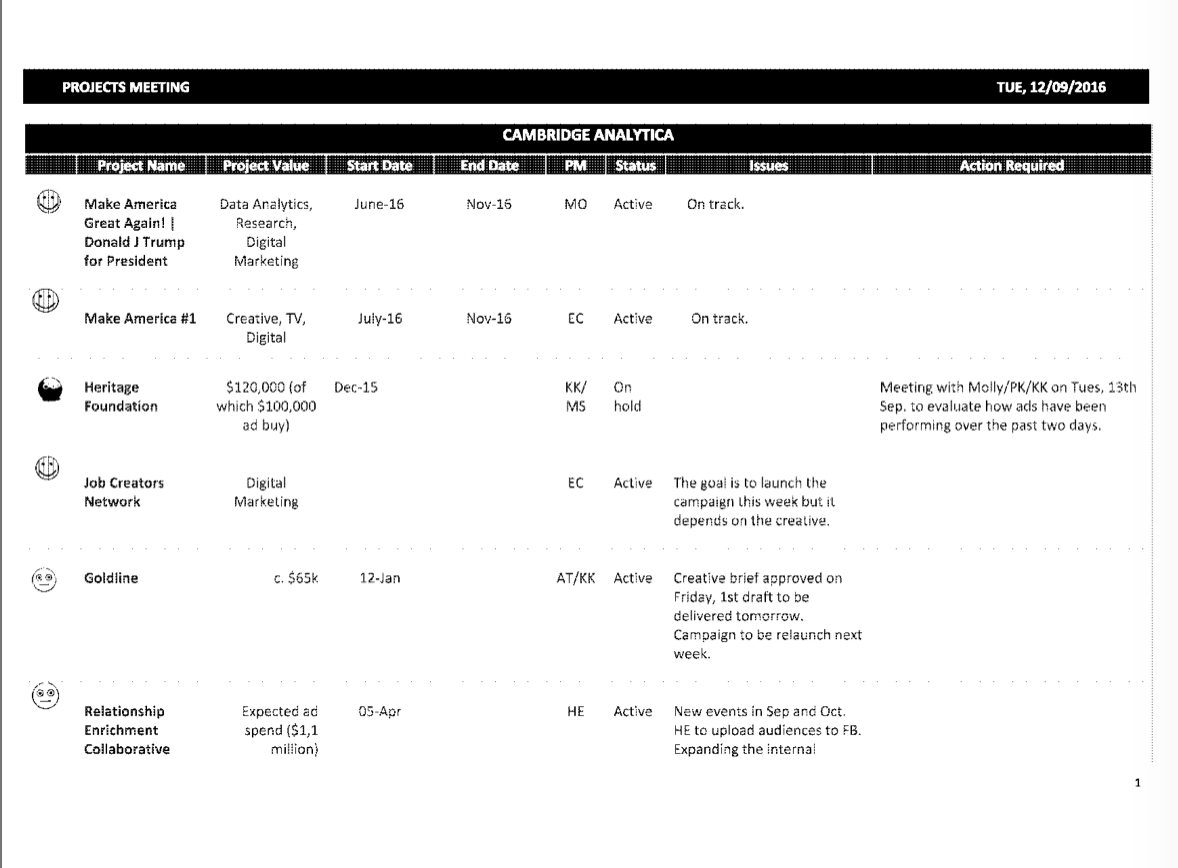 The complaint said that Cambridge Analytica, as “a vendor providing services to both the super PAC and the campaigns of candidates supported by that super PAC—first Ted Cruz, and then Donald Trump,” was “in a position to share or apply strategic information from its work for candidates to develop and target communications for the super PAC that were consistent with or complementary to those of the candidates.”

The Campaign Legal Center argued new evidence “provides reason to believe” Cambridge Analytica “did in fact use or convey to Make America Number 1 information about the Trump campaign’s plans, projects, activities, or needs, and that such information was material to the targeted communications that the super PAC created to help elect Trump.”

CLC lawyer Brendan Fischer told the Associated Press that the “idea that this spending was at all independent is farcical and these emails underscore that.”

[Image via via Spencer Platt/Getty Images]