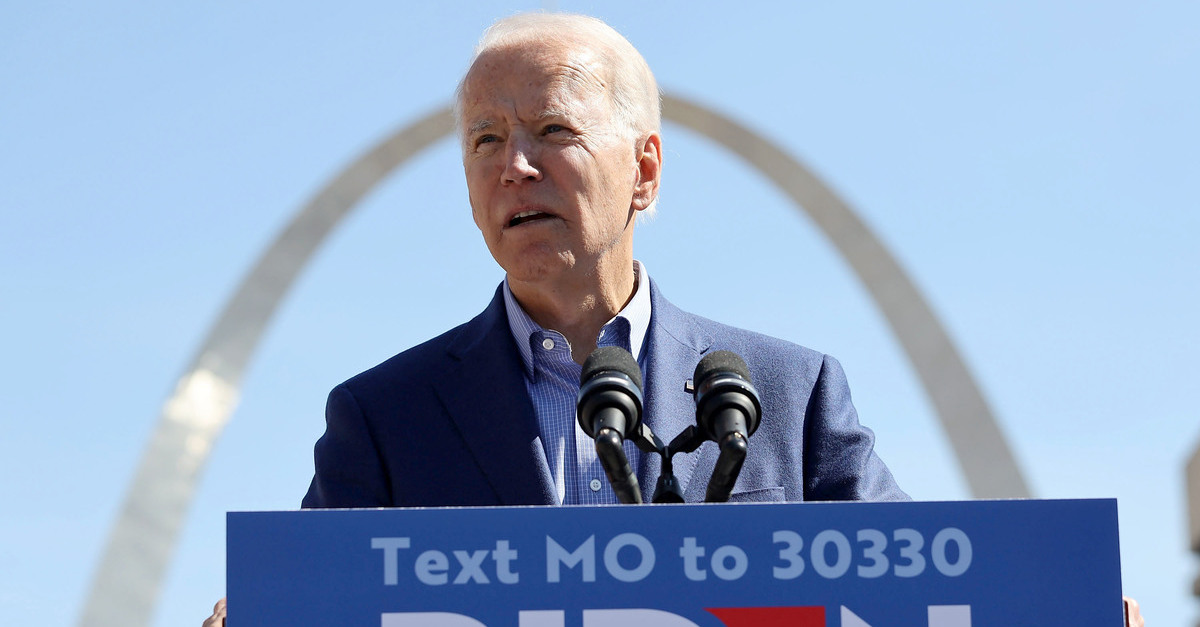 “We hold these truths to be self-evident. All men and women created by the–go–you know–the thing,” said a fired up but arguably not quite ready to go Joe Biden to a crowd of supporters last week.

The lines Biden forgot are generally considered to be commonplace: they’re the preamble to the U.S. Declaration of Independence:

We hold these truths to be self-evident, that all men are created equal, that they are endowed by their Creator with certain unalienable rights, that among these are Life, Liberty and the Pursuit of happiness.

While internet denizens, Democratic Party activists, and highly-engaged voters have buzzed with concern, incredulity, and dismay for months about what they see as an obvious and undeniable liability with Biden, mainstream media is finally starting to take some notice of Biden’s mental acuity.

This is new ground for non-Fox News media.

And it certainly has taken awhile. Biden has also notably forgotten the name of the president he served under; forgotten he was running for president; called a male voter “fat” in Iowa; called a female voter “dog-faced” in New Hampshire; violently snapped at a reporter while shouting the word “why” over and over; confused his wife for his sister at a campaign rally; and created from whole-cloth a fake story about being arrested for protesting Apartheid in South Africa.

Those concerns—long voiced on Twitter—have frequently been transmogrified into sardonic anger, hostility, and rage when coupled with the widespread perception that the media and Democratic Party establishment is actively trying to paper over Biden’s alleged or perceived mental health issues by hiding him from voters and the adversarial press.

“So far I’ve seen both Anderson Cooper and Rachel Maddow beg to interview Joe Biden on their shows,” noted former The Young Turks star and current Twitch streamer Hasan Piker via Twitter.  “Will the press actually acknowledge that Biden is almost always being kept hidden due to his brainworms or will they ignore that while writing the 75th Bernie hit piece?” Piker mulled out loud.

Such concerns became a centrality on Saturday afternoon as the Twitter hashtag #WhereIsJoe trended to focus on the Biden campaign’s self-imposed candidate/media blackout.

At a rally in St. Louis earlier in the day, the recently-anointed Democratic frontrunner shocked observers by speaking for a sparse seven minutes. The people of Twitter raised obvious questions and concerns about why Biden’s address was so brief. The campaign of Vermont Sen. Bernie Sanders (I-Vt.) capitalized on the seven-minute-man’s brevity by pointing out that the democratic socialist spoke for over three hours in two different states at public events on Saturday.

Biden’s campaign officially embarked upon the limited exposure strategy in the late summer of 2019. An article in The Hill described the campaign’s concerns with Biden’s mental acuity in the following way: “Biden has a tendency to make the blunders late in the day, his allies say, particularly after a long swing on the road, like he had last week in Iowa. They say something needs to be done to give the candidate more down time as the campaign intensifies in the fall.”

The campaign has swiftly intensified beyond all recognition in the past week. After largely being counted out (and perhaps fatally ignored) by Sanders, who stands as Biden’s only real competitor remaining in the Democratic Party primary, there’s now a renewed focus on Biden’s mental state.

An attorney and journalist who is frequently critical of the Sanders campaign strategy while supportive of its policy goals and who posts pseudonymously as “29 U.S.C. § 157” (the federal statute outlining collective bargaining rights) raised the issue on the day before Super Tuesday:

Anyway, good time to remind everyone that Joe Biden has dementia. pic.twitter.com/xETlMd46Qc

As the news and reality of Biden’s delegate haul set in, however, various media and Democratic Party voices have risen to a crescendo of angst over the potential for Biden’s cognitive issues to be expertly assayed and then made plain by a palm-rubbing Trump campaign ready to exploit the Delaware politician’s verbal mishaps.

The steadfast, wilful refusal of Dem political & media elites to address what is increasingly visible to the naked eye — Biden’s serious cognitive decline — is frightening indeed, not only for what it portends for 2020 but what it says about the ease of snapping them into line: https://t.co/InZzCja99x

“Voters see this,” noted author and journalist Chris Arnade. “They see something looks off with Biden. This isn’t made up by opponents. It is harmful to Dems in long run to deny this. Trump is gonna hammer this because that is what he does effectively: Hammers issues voters see that elites label ‘impolite’ to mention.”

“Due to the growing public concern about Biden’s mental fitness, voters are demanding that he release a cognitive functioning test,” said journalist and law student Sam Finkelstein via Twitter (while highlighting an article in the Washington Post which noted Biden has so far during the campaign refused to take a cognitive examination).

“He’s avoiding public events and TV. Maddow made an ‘on air plea’ this week to get Biden on her show,” Finkelstein’s post continued. “We deserve transparency. This is unacceptable.”

“Clearly, one of the strongest attacks against Donald Trump is that he’s just not mentally fit to be President. Rambling, mood swings, inappropriate aggression,” Adriel Hampton, a California-based digital media consultant who specializes in politics, told Law&Crime. “When it comes to the Democratic field, we’re seeing establishment interests coalesce around Joe Biden, a man facing similar questions about declining mental acuity.”

Word-finding problems, forgetting President Obama’s name and the Declaration of Independence in mid-sentence, confusing which office he’s running for, and behaving aggressively towards young protesters and reporters alike. I am very concerned that while Trump’s base has decided to accept their declining leader, the general electorate has not been exposed to these weaknesses in the putative Democratic front runner. And I have no doubt that Team Trump will exploit them savagely.

I’m worried we’ll have two sundowning men yelling at each all through the general while the future of this nation is siphoned off by billionaire political donors. Maybe we just need a do-over. @DNC, why this? I want Kamala, Juaquin & Cory back. pic.twitter.com/whcQeCCcIN #HellNoJoe

But it’s not just media and activists who have noticed—and who are making a point to draw attention to—Biden’s mental issues.

Send in the comedians to mainstream the impolite.

“This is not good,” Noah said. “Just in the past 24 hours, Joe has gaffed everything from the name of a TV anchor he was talking to, to the declaration of independence.”

Joe Rogan, the most popular podcaster in the country, lent his imprimatur to the quickly-snowballing consensus after repeat listens to Biden’s Declaration of Independence flub.

“Stop. Pause. He can’t be president,” Rogan said. “Stop. Pause. Listen. We can’t play any games here folks. This is a really old man who can’t talk. This is not a joke.”

“He shouldn’t be doing this.”

Law&Crime reached out to the Biden campaign for reaction to increasing criticism about Biden’s mental acuity. No response was forthcoming at the time of publication. If we receive any such reply, it will be included here.