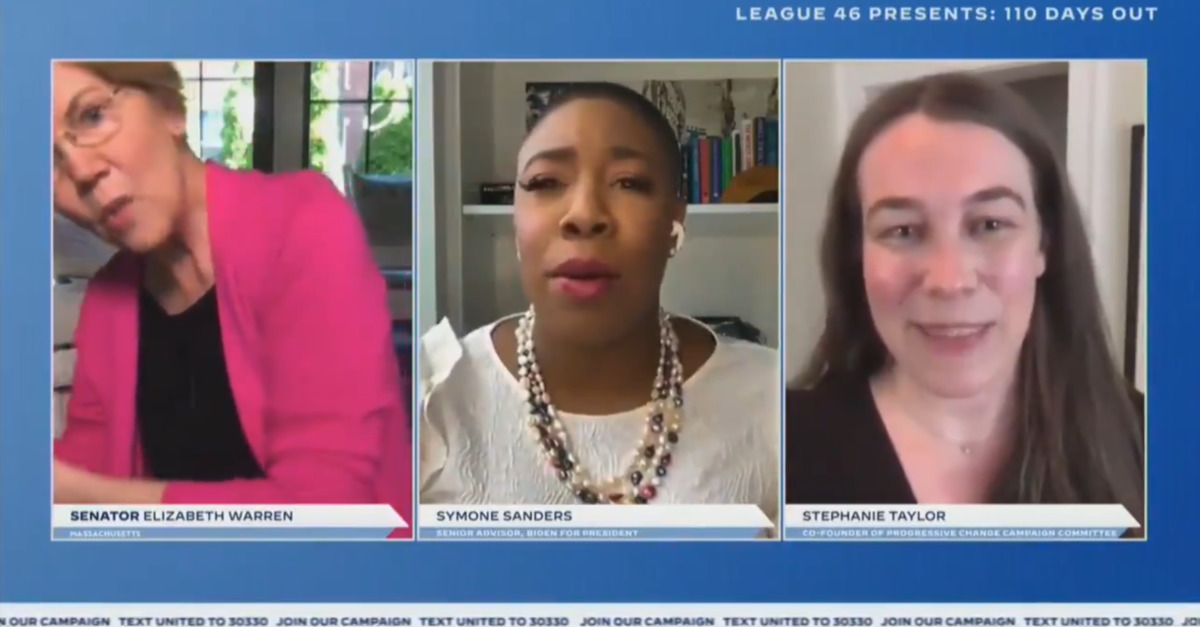 “Bailey is definitely going to vote in November and he’s voting Democrat all the way,” Warren said on a videoconference with Biden 2020 senior adviser Symone Sanders and the Progressive Change Campaign Committee’s Stephanie Taylor. “Bailey for Biden.”

Guest took the opportunity to criticize Warren by sharing the brief clip while invoking the specter of canine and feline voter fraud.

“Elizabeth Warren endorses voter fraud, says her dog will be voting Democrat,” he tweeted–simultaneously acknowledging the Massachusetts Democrat’s joke while also suggesting a literal interpretation, “Voter fraud is not a joking matter.”

“Bailey is definitely going to vote in November and he’s voting Democrat all the way. Bailey for Biden.”

Voter fraud is not a joking matter. pic.twitter.com/QNqhXgfpUK

In a follow-up tweet he shared a story about a dead cat.

The relevant portion of the linked-to story notes:

When Ron Tims checked his mail Wednesday he found something addressed to Cody Tims. Cody doesn’t get much mail. Cody is a cat. He died 12 years ago. The family keeps his ashes in a green container.

“A great cat, indoor and outdoor, loved his family, loved his neighborhood. He was 18 and a half when he passed away,” Carol Tims told Atlanta’s local Fox affiliate.

Then came the ratio: 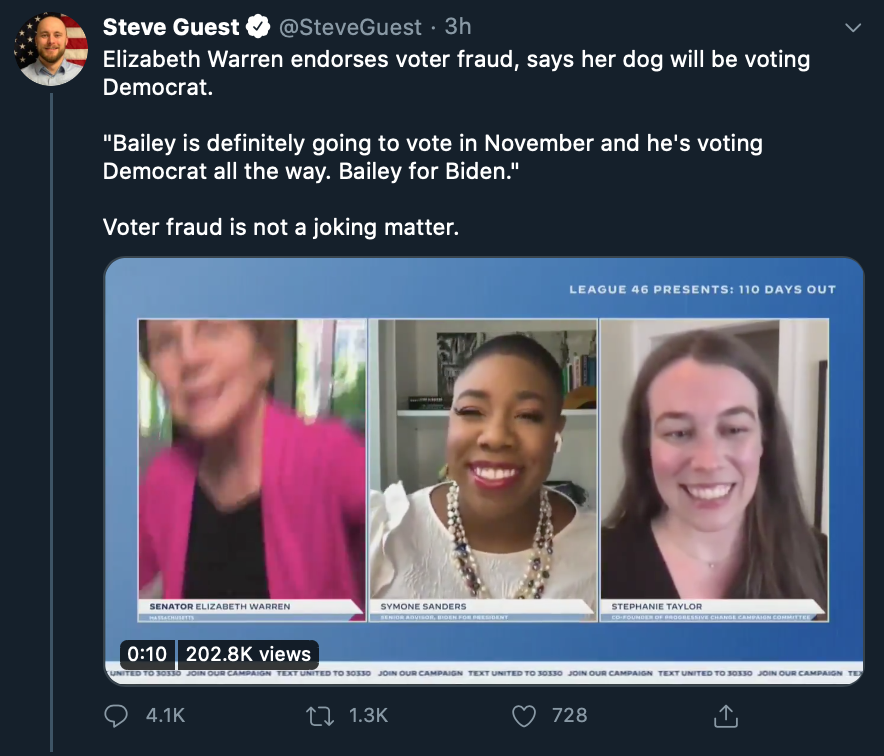 Crooked Media Editor in Chief Brian Beutler offered one of many scathing replies to Guest’s fear of dogs voting: “This is admittedly not as stupid as the last time you were unable to recognize normal human behavior, but still remarkably stupid!”

Beutler was referring to a recent embarrassment wherein the RNC official was forced to delete a series of tweets in which he criticized Democratic Party presidential candidate Joe Biden for holding one of his sons while he was a small child in a decades-old photograph.

In the image, the younger Biden can be seen wearing a beanie featuring the racist former name and logo of Washington, D.C.’s National Football League franchise. Guest appeared to be making an attempt to capitalize on the team’s recent name-change announcement.

The effort didn’t land and neither did Guest’s attempt to gin up outrage over animals crossing over into voting booths.

Aside from a wellspring of jokes–and apparently causing a hashtag about #Dogs4Biden to trend—Guest was frequently reminded that a number voter and electoral fraud scandals the past few years have been geared towards benefiting the GOP.

Law&Crime previously reported on this trend in a retrospective about Republican Party efforts at “ballot harvesting” which featured infamous electoral theft committed by the North Carolina GOP in 2018.

Of even more recent vintage is the story of Thomas Cooper, a letter carrier in West Virginia who is accused of changing several mail-in ballot requests from Democratic to Republican as well as other alterations on the official forms.

Then there is the ongoing scandal surrounding Rep. Steve Watkins (R-Kans.), who is likely to lose his seat in Congress and potentially his non-felon status after allegedly falsely claiming that he lived at a UPS store on his voter registration application.

[image via screengrab/Twitter/Biden for President]