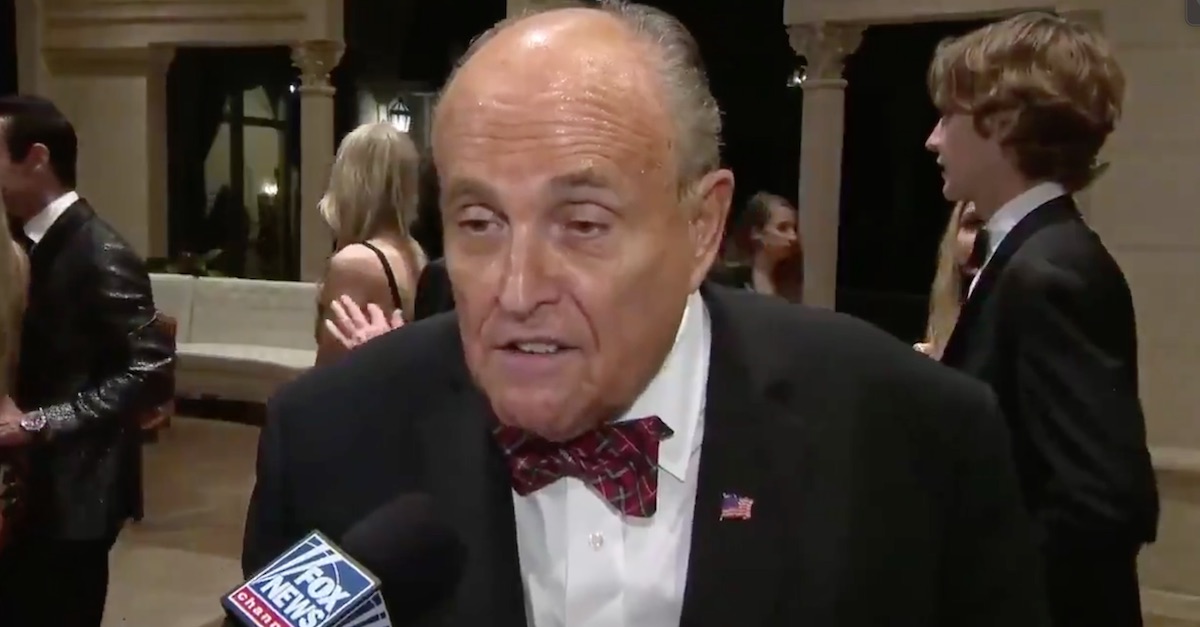 A legal group filed a bar complaint on Thursday against Rudy Giuliani, claiming that the former New York City mayor’s “flagrant and persistent lying” about widespread voter fraud in the 2020 election and the incitement of rioters at the U.S. Capitol show that he is unfit to practice law and ought to be suspended.

Lawyers Defending American Democracy (LDAD) delivered its 18-page grievance to New York’s First Judicial Department in Manhattan, demanding the ethics committee conduct an investigation into Giuliani’s for his “false public claims, on behalf of former President Trump, that the 2020 presidential election was stolen by fraud, and for filing lawsuits without legal or factual support.”

“Lawyers have a legal responsibility to enforce the rule of law,” said LDAD Chairman and co-founder Scott Harshbarger in statement. “There must be accountability for misconduct which is so obvious and consequential. He claimed Mr. Trump was a victim when he was the one trying to disenfranchise tens of millions of American voters.”

LDAD also asked that asked the committee to immediately suspend Giuliani’s license to practice law until the probe is completed.

“As lead counsel for Mr. Trump in all election matters, Mr. Giuliani has spearheaded a nationwide public campaign to convince the public and the courts of massive voter fraud and a stolen presidential election. Mr. Giuliani personally advanced and argued claims in court that were frivolous and had no reasonable purpose other than to fuel the extrajudicial campaign of falsehoods,” the complaint stated, adding that Giuliani “knew that his claims of widespread election fraud were false.”

“Federal, state, and local officials who had first-hand knowledge or had conducted factual investigations unanimously agreed that there was no widespread fraud that would cast doubt on the election of then-Vice President Joseph Biden. Judges uniformly rejected the lawsuits brought by the Trump Campaign, finding claims of widespread fraud to be unsupported. When Mr. Giuliani was at greatest risk of personal court sanction, under questioning by a federal judge during oral argument in Pennsylvania, he disavowed claiming ‘fraud’ in any respect but insisted nonetheless that state election officials should be enjoined from certifying presidential election results.”

LDAD recently began circulating the complaint amongst the legal community, garnering dozens of signatures from former Justice Department officials, judges, and state attorneys general. The group said it expects several thousand additional attorneys to support the complaint in the days to come.

NYU School of Law Professor Stephen Gillers, an expert in legal ethics who reviewed the complaint, said Giuliani’s conduct merited an investigation as well as disbarment.

“In his extensive court filings and public statements baselessly challenging the legitimacy of the election, and by urging ‘trial by combat’ to impede the operation of the Constitution and laws of the United States, Rudolph Giuliani has behaved disgracefully,” Gillers said. “The Committee, which is an arm of the New York courts, must now investigate whether this conduct renders him unfit for the honor of New York bar membership and suspend him while doing so.”