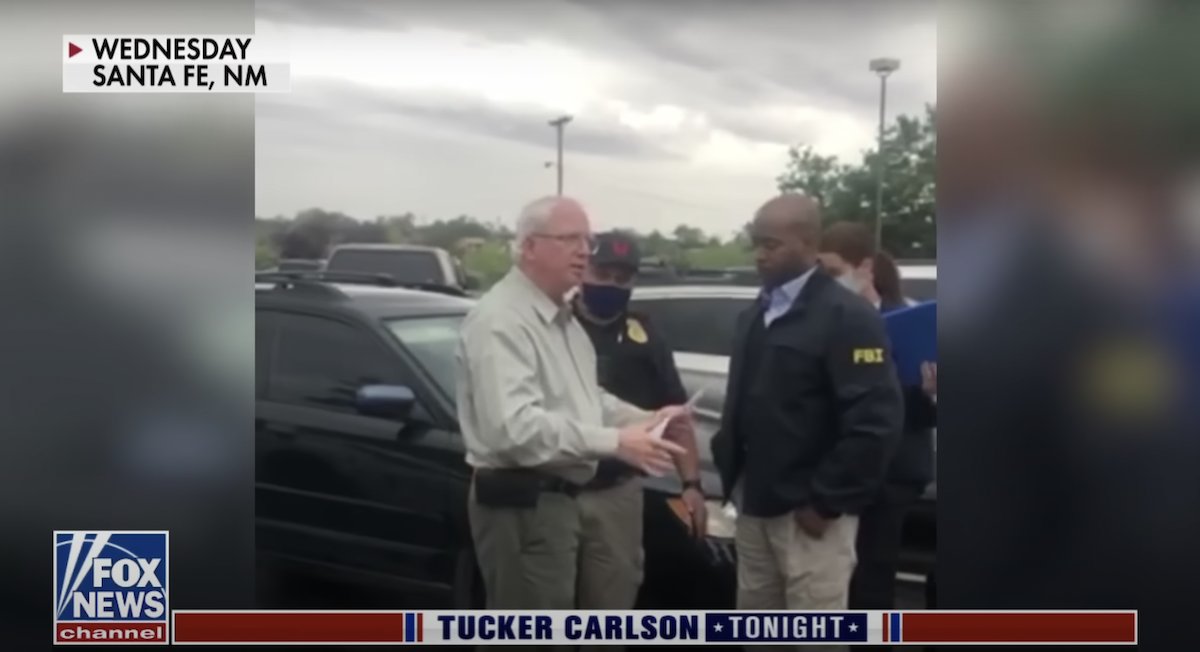 In a June 28, 2022, appearance on Tucker Carlson Tonight on Fox News, John Eastman shared video of himself being searched by federal agents on June 22 in New Mexico.

A New Mexico federal judge has vacated a hearing scheduled for next week over John Eastman’s seized cell phone, disregarding Eastman’s suggestion that a warrant for the phone’s contents may not truly exist.

Brack said he’ll “take the Government at its word that the warrant was issued, and the Court’s decision will be based in part on that representation.”

The judge also granted Eastman’s after-the-fact request to file a 22-page brief in response to the DOJ’s opposition to his motion, instead of the previously approved 12 pages. Eastman filed the longer brief on Aug. 22, then requested permission to do so four days later, saying the case “involves fairly complex legal issues” for a motion brought under Rule 41 of the Federal Rules of Criminal Procedure, which governs federal searches and seizures.

He said the DOJ’s brief raised “several novel legal issues” including that the Office of Inspector General has authority to obtain information from non DOJ employees and that it had obtained a second search warrant that includes a privilege-review process.

“These issues could not have been reasonably anticipated at the time of Movant’s initial filing,” according to the request from Eastman’s lawyers, Charles Burnham of Burnham & Gorokhov, PLLC, in Washington, D.C., and Joseph J. Gribble of Crowley & Gribble, P.C., in Albuquerque, New Mexico. “Movant submits that the need to address the novel issues raised in the government’s response constitutes good cause for extending the normal lengthy limitation of the reply brief.”

Eastman’s opposition totals 29 pages, but he said it’s only 22 if you are “not counting the Table of Contents, Table of Authorities and caption.”

DOJ lawyers opposed 10 extra pages but said they were OK with five extra pages and may seek extra time to file a surreply, which is atypical. Brack said Tuesday the surreply can be no more than 12 pages and is due by Sept. 6.

The judge’s cancellation of the hearing, however, indicates he doesn’t see the legal complexities that Eastman does. Brack asked Eastman and the DOJ to consider whether there truly is a contested evidentiary issue that warrants a hearing. Eastman said there was because the DOJ hasn’t produced the warrant and Eastman doesn’t accept that it exists. But Assistant U.S. Attorney Mary L. Dohrmann in Washington, D.C., “disagreed that this issue necessitates a hearing,” according to Brack’s order, and the judge sided with her.

At issue is Eastman’s motion for return of seized property, which argues the DOJ’s search of Eastman in June was illegal and calls for his phone to be returned to him. It also asks for Brack to order the DOJ’s Office of Inspector General, which is overseeing the case, “to destroy all copies of any information that has already been retrieved or copied from the device.”

Brack rejected Eastman’s request for a temporary restraining order but gave the DOJ two weeks to tell him if they’d obtained a second warrant for the phone’s contents. DOJ lawyers confirmed on July 27 that they’d done so, then filed a 24-page opposition to Eastman’s motion on Aug. 8 that said Eastman hasn’t “shown the exceptional circumstances required” to justify the return of evidence or consideration of the legality of a warrant.

“Moreover, the relief he seeks—destruction of evidence obtained by the Government—contravenes both the language and purpose of Rule 41(g),” according to the opposition.

Eastman’s reply said that if Brack won’t order the return of his phone and the destruction of seized information because of an unconstitutional warrant, the return still needs to happen “unless the Government can demonstrate a continuing need to retain the phone and its information.”

“Movant submits that before giving judicial blessing to such an unprecedented power grab, this Court would be prudent in requesting a proffer from the Government of how it alleges that Movant’s activities adversely affected the Department of Justice,” according to the brief. “This Court should also demand some limiting principle for the vast investigative authority the government is now claiming pursuant to this heretofore obscure regulation.”

It’s unclear when Brack could issue a ruling, but with the DOJ’s surreply due Sept. 6, a decision could come any time after that.