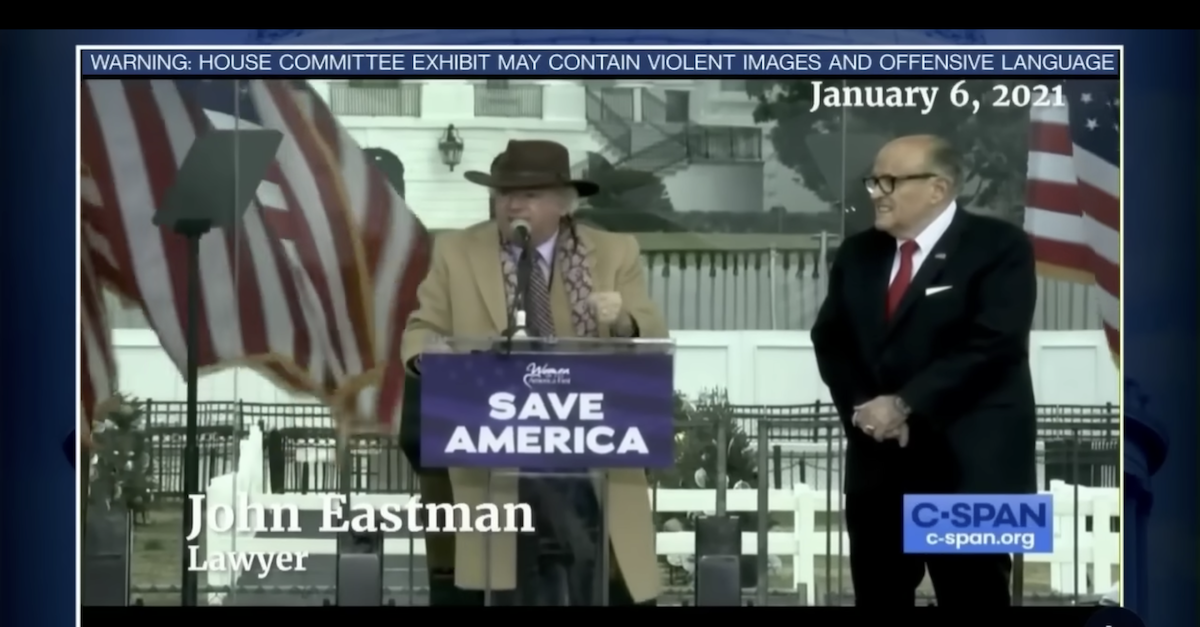 John Eastman speaks in Washington, D.C, on Jan. 6, 2021, alongside Rudy Giuliani, in a video clip played during a hearing of the Jan. 6 Committee. (screenshot from ABC Denver affiliate KMGH-TV YouTube)

The Jan. 6 Committee said Monday that John Eastman’s “consistently unreliable” descriptions of the contents of his Chapman University emails mean a judge should review the documents to determine if his privilege claims are valid.

The short filing in the case before U.S. District Judge David O. Carter in the Central District California includes as an exhibit emails between Eastman’s fellow Trump lawyers Kenneth Chesebro and Bruce Marks in which Chesebro appears to joke about the former president’s claimed wealth and his reputation for rewarding loyalists.

Chesebro emailed Marks and Eastman about 11:50 p.m. on Dec. 30, 2020 saying he was at Trump International Hotel in New York, “so I’m feeling extra inspired to work on the President’s cases.” Marks replied, “A shame you are not in DC and could contribute to violations of the emoluments clause” with a smiley face emoji, apparently referring to allegations that Trump had received improper payments from foreign sources through his hotel in Washington, D.C. Chesebro then wrote that he’d be staying at the Trump hotel in Washington, D.C., from Jan. 3, 2021 to at least the 8th.”

“Doing my part to curry favor with the President by lining his (empty) pockets,” Marks wrote with a grinning emoji.

Eastman described the emails as “Comm with co-counsel re Reply ISO Cert Petition” when arguing to Judge Carter that they were privileged communications that shouldn’t be released to the committee.

“As these examples illustrate, Dr. Eastman’s representations regarding the nature or content of the remaining 562 documents are unreliable,” according to Monday’s brief from House General Counsel Douglas Letter.

In another example cited in the brief, Eastman claimed as privileged a “handwritten note re issues for anticipated litigation” that turned out to be a photograph of a Trump rally with “TIMES 50 SUCH EVENTS – NO WAY THIS LOSES,” apparently written by Trump as his signature appears afterward.

#J6 Committee lawyers filed as an exhibit the photo that Eastman called a handwritten note discussion anticipated litigation. It’s a photo of a Trump rally with “TIMES 50 SUCH EVENTS – NO WAY THIS LOSES” written up top. pic.twitter.com/RsC0SAt5UH

“In reality, the email is merely a one-line note from Molly Michael, then-President Trump’s assistant, stating: ‘The President wanted you to see this photo – attached with caption[.],’” committee lawyers wrote.

The filing responds to a brief Eastman filed last week that urges Carter to keep the remaining documents from the committee.

This will be the third batch of emails reviewed by Carter, a 1998 Bill Clinton appointee who is based in Santa Ana, California.

In March, Carter ordered the release of 101 of 111 emails and documents Eastman sent and received between Jan. 4-7, 2021. Then in June, he ordered 149 of 599 emails and documents dating to Nov. 3, 2020, released. He applied the crime-fraud exception each time, ordering two privileged documents released because he concluded they were written in perpetuation of a crime or fraud.

Jan. 6 Committee lawyers in May decided to “hold in abeyance” their objections to Eastman’s privilege claims regarding the final batch of 576 documents. They told Eastman’s lawyers, Charles Burnham and Anthony T. Caso, in August they would be pursuing them, and the attorneys produced four on their own accord.

One of those was the email from Michael that accompanied the Trump rally photo, as the committee’s new brief explains. Eastman’s brief last week said he’d agreed to produce 18 documents total of the 576 but argued the remaining are privileged and shouldn’t be released.

Monday’s brief puts the number of documents at 562 and said Eastman’s representations regarding the nature of their content “are unreliable.” Committee lawyers, of course, haven’t seen the emails, but they cited earlier examples of Eastman’s characterizations of emails that Carter later ordered released.

“Congressional Defendants therefore ask that the Court review these documents in camera to determine the validity of Dr. Eastman’s privilege assertions and the applicability of the limitations and exceptions considered in this Court’s prior orders, including waiver, compelling need, and crime-fraud,” according to the brief.

A footnote said the committee stands by its objections to Eastman’s earlier privilege claims but aren’t asking Carter to revisit them.

“We ask only that this Court review the remaining documents in accordance with its prior orders,” according to the note.

Eastman’s reply is due Wednesday, then the matter will be fully briefed and Carter could issue a ruling at any time.