Firefighter Arrested for Participating in D.C. Insurrection After Photo Showed Him Pointing to Pelosi Placard 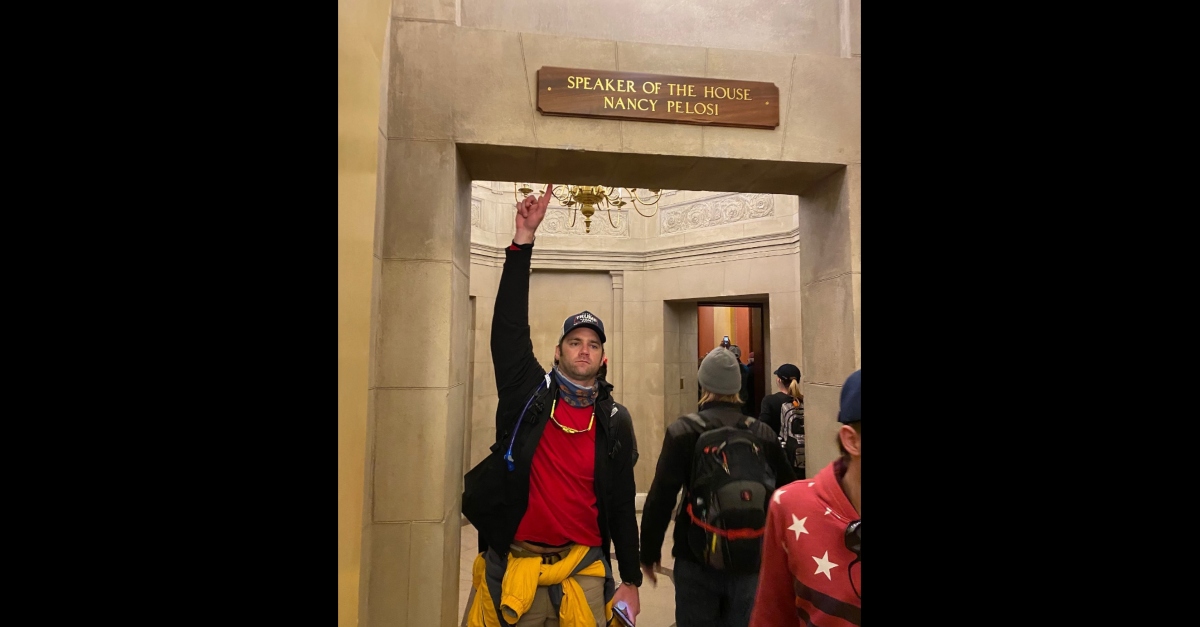 Things are getting even more dicey for a Florida firefighter linked to the D.C. insurrection. Andrew James Williams was arrested for a count each of unlawful entry of a restricted building, and disorderly conduct on Capitol grounds, the Sanford Fire Department said in a statement late Tuesday.

The defendant had already been put on administrative leave with pay last Thursday after the department learned about a photograph that put him at the scene. As seen above, the image shows the man identified as Williams pointing at a placard for Nancy Pelosi, the House Speaker and perennial target for President Donald Trump.

The SFD is changing Williams’ status to leave without pay, and their administrative investigation into this matter is on hold during the federal criminal investigation, they said on Tuesday.

“We hold the men and women in this department to the highest standards,” Chief Craig Radzak said in a statement. “It saddens me that the actions of one individual have tarnished the hard work and dedication that the rest of the department puts forth on a daily basis. As is policy with any type of policy violation, including a criminal violation, an internal administrative process must be followed in order to ensure a thorough investigation with a just conclusion. I ask for the public’s patience as we move through this process.”

Trump supporters broke into the Capitol building last Wednesday after POTUS continued to lie that he actually won the 2020 presidential election and that it was stolen from him. The chaos resulted in five deaths. Trump supporter Ashli Babbitt, 35, was shot and killed by Capitol police. Three others–Rosanne Boyland, 34, Kevin Greeson, 55; and Benjamin Phillips, 50–died from what cops described as “medical emergencies.” The death of Capitol police officer Brian Sicknick is being investigated as a possible murder as he was allegedly struck with a fire extinguisher. A second Capitol police officer, Howard Liebengood, died by suicide on Saturday.

An attorney for Williams asserted that both Trump and the Capitol police encouraged “despicable behavior.”

“Mr. Williams took part in none of it,” he told reporters while leaving a federal courthouse with his client. “In fact, you’ll notice in the complaint there are no allegations that Mr. Williams did any of those things.”

Williams is charged with entering a temporary residence of the president and disorderly conduct on capitol grounds. Conditions of his release include:
– $25,000 bond
– surrender passport
– remove all guns from home@MyNews13 #CapitolRiot pic.twitter.com/D0Gw9CBOvM

It is unclear what the attorney precisely meant by asserting Capitol police encouraged “despicable behavior.” Nonetheless, the department has been roundly criticized for last Wednesday’s events, though there were also heroic examples from that fateful day.

At best, Capitol police were underprepared as an institution and were not immediately supported by the National Guard as the situation spiraled out of control. At worst, some members of the force appeared to enable the insurrection. One officer was recently suspended for allegedly directing rioters and wearing a MAGA hat. Another was suspended after being seen taking a selfie with a man who was apparently one of the intruders; 10 to 15 officers are being investigated for their behavior, said U.S. Rep. Tim Ryan (D-Ohio, 13th District), who did not specify the behavior in question.