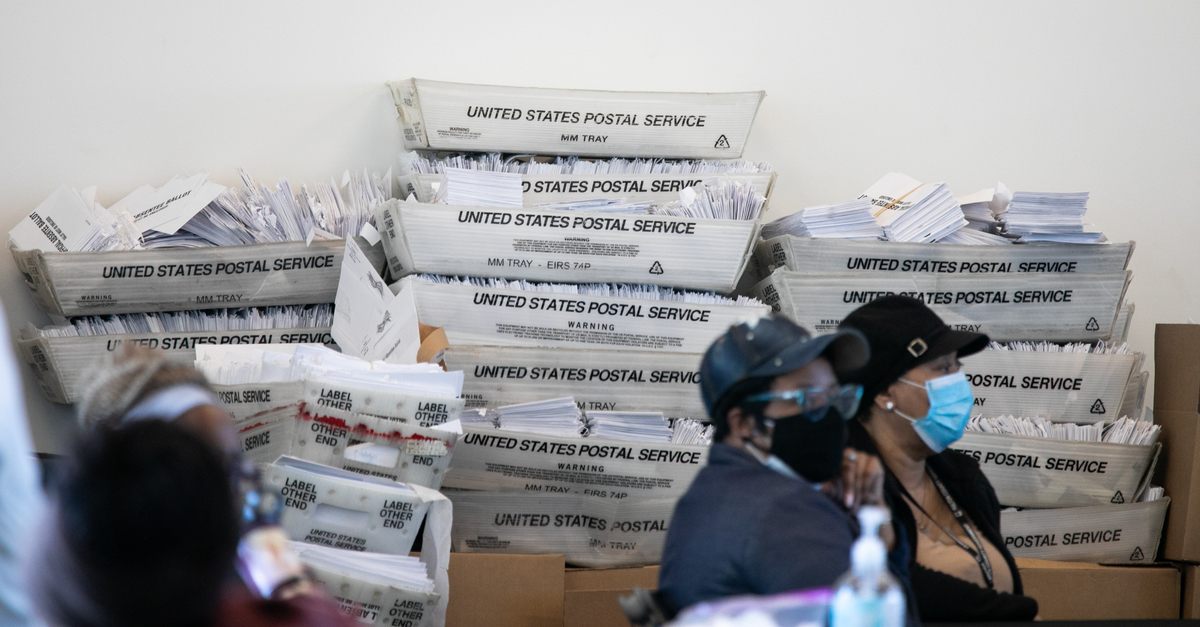 ATLANTA, GA – NOVEMBER 06: Security envelopes for absentee ballots sit in stacked boxes as Fulton county workers continue to count absentee ballots at State Farm Arena on November 6, 2020 in Atlanta, Georgia. The 2020 presidential race between incumbent U.S. President Donald Trump and Democratic nominee Joe Biden is still too close to call with outstanding ballots in a number of states including Georgia.

An election worker is currently in hiding after being falsely accused of tampering with ballots in Georgia.

The Peach State’s Fulton County was one of the last remaining areas left to report ballots as of Friday, and officials spoke during a press conference regarding their progress when the announcement about the worker was made.

Elections Supervisor Rick Barron said a worker from the State Farm Arena had been threatened due to a false report spread over social media that they had been seen throwing out a ballot. That’s according to local ABC affiliate WSB-TV.

“He is in hiding,” Barron said.

The controversy began after video of the worker appeared on Twitter. Narration on the footage accused the worker of crumbling up and throwing away a voter’s ballot. The video quickly went viral.

“He has a fit about something,” the narrator says. “And then flips off a ballot, and then crumples it up. If that is not voter fraud I don’t know what is.”

The source of the original video is currently unclear.

In response, the GOP leader doubled down:

Twitter is wrongfully suppressing this tweet. It is neither “disputed” nor “misleading.” Our lawyers made this demand today! pic.twitter.com/rTQJuMvuYt

After the online flareup, Barron and other election officials investigated the video that showed the worker using an envelope cutting machine–a machine used to separate inner ballot envelopes from outer ballot envelopes.

“It’s been questioned whether the poll worker featured in the video was discarding one of those ballots,” Barron told reporters on Friday evening, “The answer is no, undeniably no. At no time was the poll worker able to extract a ballot.”

“However one thing that you need to know is that those ballots are 8 ½ by 19 inches long,” Barron said. “At no time did you see him extract anything from the envelope and that crumbled piece of paper, they were instructions and it was a smaller piece of paper.”

Fulton County officials are currently consider whether or not the worker needs to receive public protection.

“He is having to leave his house and go stay with friends,” Barron added. “He’s afraid to drive his car because the information about his car, about his license plate are out there.”

As an already tense election atmosphere drags on due to delayed ballot-counting, officials are concerned that frayed emotions are being taken out on public servants who are just trying to do their best.

“He was one of the workers that we had who trained everyone how to use those cutting machines because he was very good at it, and he was the fastest one,” Barron said. “I expressed my sorrow that all of this has happened to him for wanting to be an election worker and doing nothing but a good job during that.”