DOJ Pounces on Steve Bannon’s Claim That He’s Ready to Testify to the Jan. 6 Committee in ‘Last-Minute’ Fashion 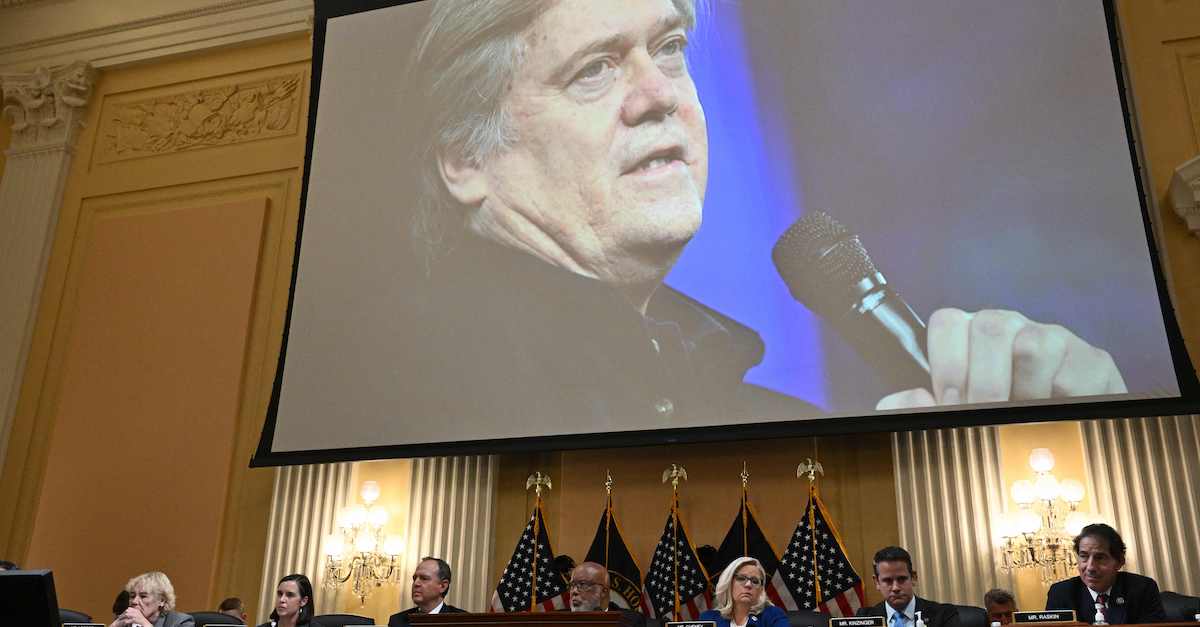 Former White House Chief Strategist Stephen Bannon, appears on screen during the fourth hearing by the House Select Committee to Investigate the January 6th Attack on the US Capitol in the Cannon House Office Building on June 21, 2022 in Washington, DC.

The Department of Justice took swift action against Stephen K. Bannon on Monday, asking a federal judge to prevent the jury from learning about the former White House strategist’s “last-ditch” offer to testify before the Jan. 6 Committee on the eve of his trial.

Bannon, a top ally of former President Donald J. Trump who was involved in his plans to overturn the 2020 election, informed the Committee via counsel Sunday that he is now willing to comply with the Committee’s subpoena and give testimony about the events of Jan. 6, 2021. Bannon’s about-face comes as his contempt trial for failure to comply with the Committee’s demands is poised to begin on July 18. The House of Representatives voted to refer contempt of Congress charges against Bannon last October, and the Justice Department later indicted him.

By way of explanation for Bannon’s change of heart, the letter insisted that “Mr. Bannon has been steadfast in his convictions,” but offered that “circumstances have now changed” now that Trump has waived his claim of executive privilege with respect to Bannon’s testimony and document production.

The Justice Department responded in short order by filing a motion to exclude any evidence or argument relating to what it called Bannon’s “eleventh-hour efforts.” The DOJ argued in its motion that Bannon’s “last-minute efforts to testify, almost nine months after his default—he has still made no effort to produce records—are irrelevant to whether he willfully refused to comply in October 2021 with the Select Committee’s subpoena.” “The criminal contempt statute is not intended to procure compliance,” the motion argued. Rather, “it is intended to punish past noncompliance.” Bannon’s newfound desire to testify “does not erase his past contempt,” it continued.

Furthermore, the DOJ added that contrary to Bannon’s assertion that “circumstances have now changed,” the only really change is that Bannon “is finally about to face the consequences of his decision to default.” Moreover, prosecutors said, “the former President never invoked executive privilege over any particular information or materials,” and Bannon’s attorney “misrepresented to the Committee” what Trump’s lawyer told him.

The government said that Trump’s claim of executive privilege “never provided a basis for total noncompliance in the first place.” Given this context, it said, Bannon’s “sudden wish to testify is not a genuine effort to meet his obligations but a last-ditch attempt to avoid accountability.” The DOJ warned that if the court allows Bannon to testify or otherwise introduce evidence, it will lead to a “mini-trial” on the admissibility of the testimony, which would be a confusing waste of resources.

In addition to its motion to exclude Bannon’s testimony, the Justice Department also filed documents Sunday opposing Bannon’s motion for a continuance based on allegedly having received late and inconsistent discovery. The DOJ countered that it complied with all discovery demands and denied having provided Bannon’s counsel with inconsistent documents. In its filing, the DOJ noted: “The ‘inconsistencies’ about which [Bannon] complains consist of differences like referring to the former President as just ‘TRUMP’ in one version, and referring to him as ‘former President TRUMP’ in the other.

Bannon’s arguments to delay amount to no more than an “effort to create panic” rife with mischaracterizations and misstatements, prosecutors said.

The Justice Department charged Bannon with two counts of criminal contempt in November for his refusal to provide documents and testimony to the House committee investigating the Jan. 6, 2021 attack on the U.S. Capitol.