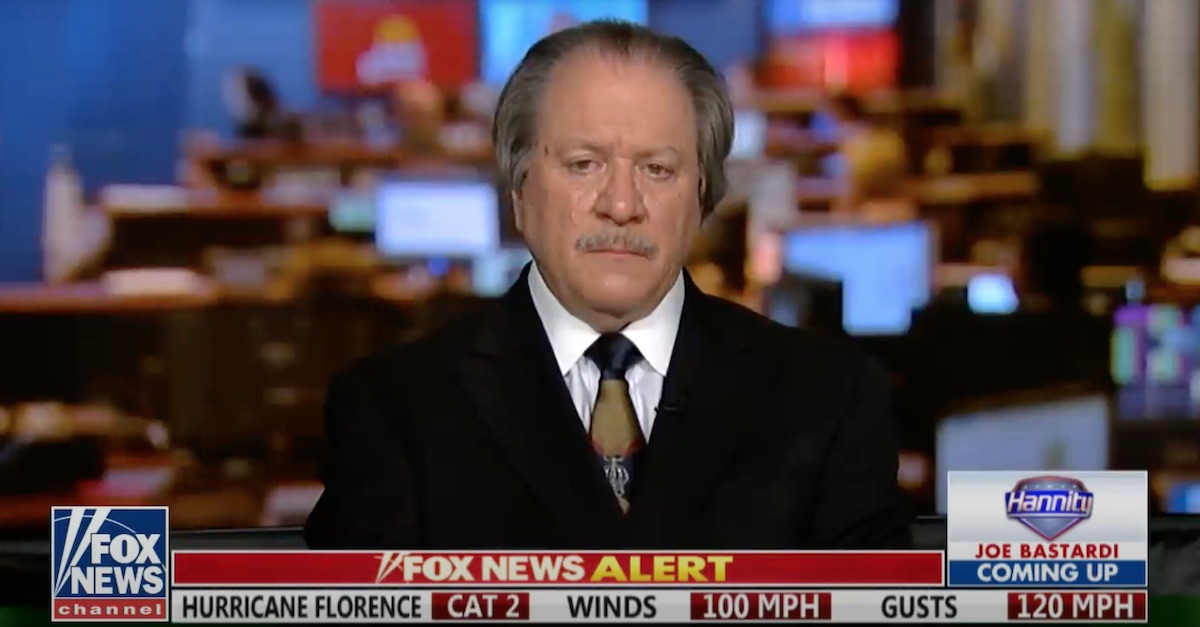 Joe diGenova said he was joking, but Democrats weren’t laughing and they filed a bar complaint against him with the D.C. Bar’s Office of Disciplinary Counsel.

Earlier this week, the Trump campaign lawyer and former U.S. Attorney went on Newsmax’s The Howie Carr Show and said that Chris Krebs should be “drawn and quartered,” a medieval capital punishment for traitors. DiGenova also said that Krebs should be “taken out at dawn and shot.” Krebs was the director of the Cybersecurity and Infrastructure Security Agency, and President Donald Trump fired him for saying that 2020 election wasn’t rigged.

Legal ethics experts were in disagreement as to whether diGenova clearly violated a rule that could result in some form of bar discipline for his words, but Democratic Reps. Kathleen Rice (D-N.Y.) and Ted Lieu (D-Calif.), both of them attorneys, filed a complaint alleging direct violations of the Rules of Professional Conduct:

Furthermore, the security of the 2020 election is the subject of ongoing litigation that Mr. diGenova is a part of as the President’s attorney, and Mr. Krebs’ statement that the election was secure is necessarily part of these cases. Therefore, Mr. diGenova’s blatant threat to Mr. Krebs’ life inexorably interferes with the work of the courts in addressing the President’s claims about the security of the election in violation of Rule 8.4. Further, Mr. diGenova should have known this threat, which was made by means of mass public communication, could prejudice any proceeding in which Mr. Krebs would be called as a witness in violation of Rule 3.6.

Mr. diGenova’s conduct is also in direct violation of Rule 4.4: Respect for Rights of a Third Person, which states: “(a) In representing a client, a lawyer shall not use means that have no substantial purpose other than to embarrass, delay, or burden a third person, or knowingly use methods of obtaining evidence that violate the legal rights of such a person.” Calling for Mr. Krebs’ death serves no legitimate or substantial purpose other than placing a grotesque burden on him and his family.

On Tuesday, diGenova told the Washington Examiner that he meant “no harm” when he said Krebs should be shot.

“For anyone listening to the Howie Carr Show, it was obvious that my remarks were sarcastic and made in jest. I, of course, wish Mr. Krebs no harm. This was hyperbole during political discourse,” diGenova claimed.

Reps. Rice and Lieu said this was no laughing matter, and that diGenova’s “egregious statement” could be “taken as an implicit green light – especially by those who look for hidden meaning and direction in the President’s words.”

“Mr. Krebs only sought to explain honestly to the American public the ways in which the 2020 election were secure from a cybersecurity standpoint, a fact that has been obscured by objectively false statements from the President and his legal team,” the complaint said. “In the United States, we cannot and will not allow death threats – especially from those acting on the President’s behalf – to silence discourse, dissent, and honesty.”

The lawmakers asked the Office of Disciplinary Counsel to immediately open an investigation into diGenova.

“Mr. diGenova’s comments are on their face a violation of the Rules of Professional Conduct and adversely reflect on his honesty, trustworthiness and fitness as a lawyer. Above all, however, this Counsel and the District of Columbia Bar has a strong interest in maintaining the integrity of the profession as a whole,” the complaint concluded. “If a lawyer licensed in the District of Columbia can – while speaking in a representative capacity – publicly call for the death of his client’s perceived adversaries without consequences, the Counsel has abjectly failed in its duty.”