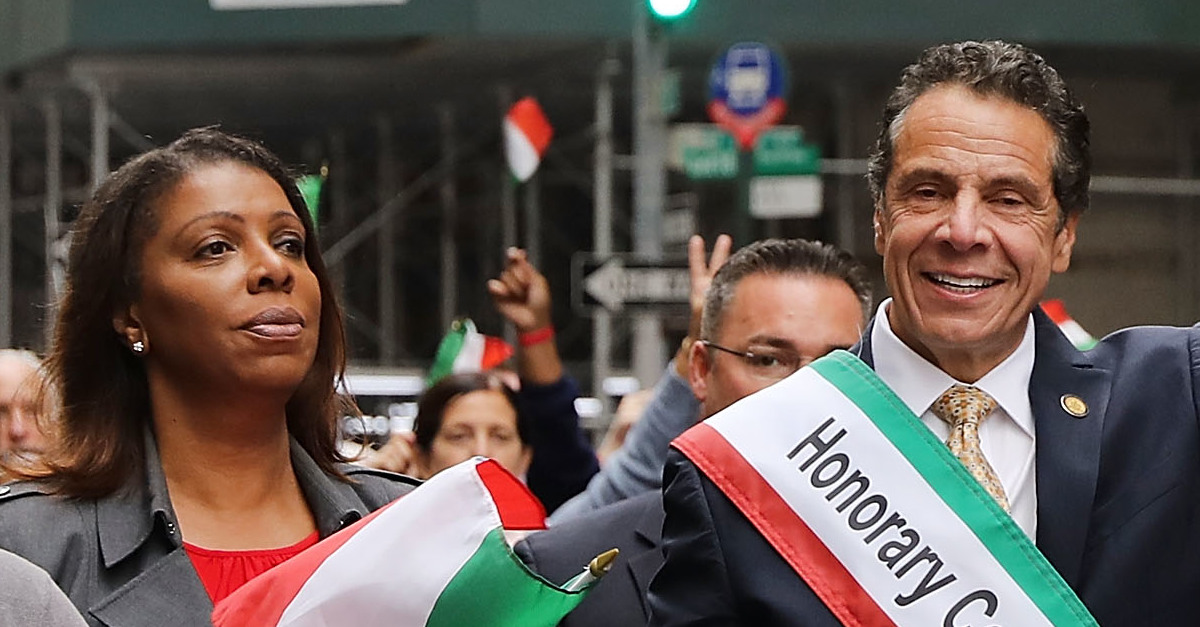 New York Governor Andrew Cuomo and New York Attorney General Letitia James, both of whom are Democrats, argued in a Wednesday motion that several thousand otherwise valid absentee ballots cast by Democratic Party primary voters last month should be not be counted due to errors made by the U.S. Postal Service.

Earlier this year, Cuomo hailed the pageantry of New York State embracing relaxed absentee ballot rules due to the novel Coronavirus (COVID-19) pandemic. A recent executive order allowed voters to cast their ballots by mail as long as they were in a letter carrier’s hand by election day. But the state’s interpretation of that change now stands to invalidate upwards of 100,000 such ballots.

The Cuomo-controlled New York State Board of Elections (BOE) wants to toss out any ballot that arrived after June 23, the date of the primary election, if the post office that received the ballot forgot or otherwise failed to formally postmark the ballot’s outer envelope.

Here’s the rub:  postage-paid envelopes (like the ones used to send ballots in New York State) are not typically stamped by post offices. The Postal Service issued a directive in New York State to postmark those envelopes anyway, but human error and communication issues have resulted in thousands of ballots lacking the apparently critical USPS stamp.

“Absolutely no one thought [the New York State Board of Elections] would toss ballots that were received +/- 7 days of Primary Day because of a postmark,” said New York activist Joshua Saberman. “We need Congress to restore the Voting Rights Act because Democrats and Republicans are gutting our right to vote in its absence.”

In public, Cuomo has suggested that the legislature could fix the issue by passing a law to clear things up. But the same legislators who would vote on such changes are many of the same incumbents who stand to lose their re-election bids if the insurgent wave so-far reflected in absentee ballots holds steady for the thousands of ballots the state is trying to throw away.

In Wednesday’s court filing, however, Cuomo and James expressed their adamant opposition to counting the votes.

“The injunction requested by Plaintiffs is not in the public interest because it would upend the rules by which the June 2020 Primary was conducted–and do so after that election has already taken place,” Cuomo and James argued in their filing.

The state’s motion was filed in response to a lawsuit brought by New York State Assembly candidate Emily Gallagher, who recently sued on behalf of herself and other candidates who want to see all valid absentee votes counted by the BOE.

The motion to toss those ballots continues [emphasis in original]:

Worse than the eve of the election, the relief requested here would, one month after election day, retroactively alter the rules that all candidates and voters thought had applied. The public interest would not be served by such an extraordinary result. By contrast, Plaintiffs’ alleged injury is simply the result of the application of New York’s reasonable and non-discriminatory rule that absentee ballots must be received or postmarked by election day.

Notably, the Cuomo-James brief relies upon a recent decision by the conservative wing of the U.S. Supreme Court which declined to extend the deadline for absentee voting in the Wisconsin primary election and general judicial election. That decision was widely criticized by liberals, including Supreme Court Justice Ruth Bader Ginsburg, who blasted the high court’s GOP-nominated majority for endangering voters’ lives during the still-raging pandemic.

Cuomo’s favorable citation of that decision is likely to raise eyebrows.

J. Remy Green is an attorney fighting Cuomo, James and the BOE on the issue. In an email to Law&Crime they said the state’s filing was “a classic example of how the government talks out of four sides of their mouth in cases like this” and that the government’s arguments “are without much legal merit.”

“Given the Governor and the Board’s repeated comments that they wish they could fix this situation but it’s just beyond their power, it’s really a staggering waste of everyone’s valuable time and resources not to just agree to count votes (even just those votes — like the votes received on June 24 — where there is absolutely no question the voter mailed the ballot on time),” Green continued. “That the Governor went as far as arguing that counting every vote is not in the public interest is chilling — and he should really consider the implications for November if the Court accepts his argument.”