Who Is Cleta Mitchell? | Law & Crime

A Lawyer Went on Fox News and Stunned an Anchor. Two Months Later, She Was on a Trump Phone Call That Will Live Forever in History. 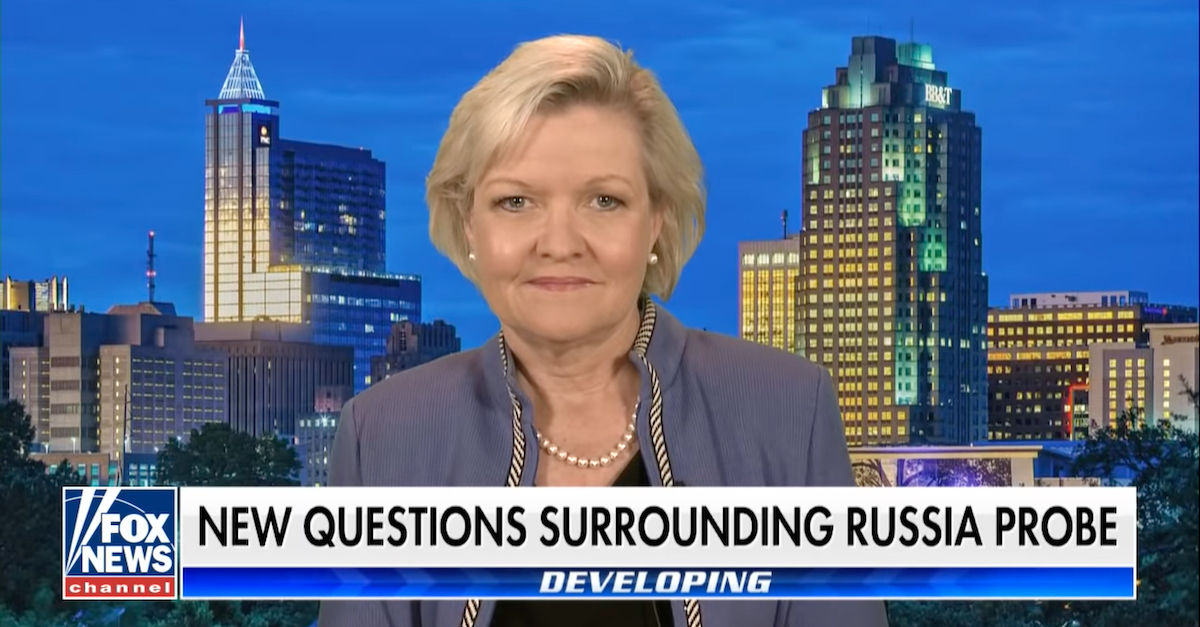 Shortly after the November election, a lawyer went on Fox News Channel and stunned an anchor by disregarding that the 2020 election had been statistically called by the network for Joe Biden. Two months later, that same lawyer, Cleta Mitchell, was revealed by the Washington Post to have been on a phone call in which President Donald Trump threatened criminal liability against Georgia’s Secretary of State unless the state official could “find” enough votes for Trump to win the Peach State. (Even if that happened, it would not reverse the election outcome.)

Sandra Smith, off-air, reacts to her colleague Trace Gallagher indulging a nutjob who denies the outcome of the election even after Fox News had called it for Joe Biden: pic.twitter.com/gZ4nrnVHab

During the phone call between Trump and the Georgia Secretary of State, Chief of Staff Mark Meadows described “attorneys that represent the president, Kurt and Alex” as also being on the line along with several Georgia officials. Meadows then said “Cleta Mitchell” was also part of the call, whom he said “is not the attorney of record but has been involved.”

A transcript of the conversation released by the Post indicates that Mitchell asked the Secretary of State’s office for access to its records to ensure dead people and out-of-state voters did not cast ballots in Georgia. Mitchell also complained that ballots had been counted after poll watchers left a facility. However, she disagreed when Trump tried to springboard from her accusations into a tirade alleging that he won the election by huge margins and that Georgia officials were failing to see things his way (emphasis added):

Mitchell: I will tell you. I’ve seen the tape. The full tape. So has Alex. We’ve watched it. And what we saw and what we’ve confirmed in the timing is that they made everybody leave — we have sworn affidavits saying that. And then they began to process ballots. And our estimate is that there were roughly 18,000 ballots. We don’t know that. If you know that . . .

Mitchell: Well, I don’t know about that.

Trump: I do think we had ours magnified out.

Mitchell further attempted to request records — only to have Trump shoot down her search for additional facts.

“Again, if you have additional records, we’ve been asking for that, but you haven’t shared any of that with us,” Mitchell said to the Georgia officials.  “You just keep saying you investigated the allegations.”

“Cleta, a lot of it you don’t need to be shared,” Trump said, apparently disagreeing for a brief moment that facts matter.

Elsewhere Mitchell directly contradicted Trump’s understanding of his own arguments.

Trump: So why did you do Cobb County? We didn’t even request — we requested Fulton County, not Cobb County. Go ahead, please. Go ahead.

Ryan Germany, Raffensperger’s general counsel: We chose Cobb County because that was the only county where there’s been any evidence submitted that the signature verification was not properly done.

Trump: No, but I told you. We’re not, we’re not saying that.

Mitchell: We did say that.

The full transcripts contain evidence of Trump completely undermining Mitchell’s attempts to discuss the matters he raised. At one point, Trump ranted that “thousands” of people “want[ed] to testify” on his behalf that they attempted to vote but were instead turned away under the presumption that ballots were already filled out in their names; he further asserted that either “100 percent” or a “very substantial number” of military ballots “came in, all for Biden.”

Trump: Does anybody know about it?

Mitchell: I know about it, but —

Germany: I don’t know about that. I do know that we have, when military ballots come in, it’s not just military, it’s also military and overseas citizens. The military part of that does generally go Republican. The overseas citizen part of it generally goes very Democrat. This was a mix of ’em.

Mitchell is unique among others who have been either directly or indirectly involved with Trump’s efforts to remain in office. She is a partner at the large, elite, multi-city firm Foley & Lardner, not a small firm (yet high-profile) practitioner like attorneys Sidney Powell and Lin Wood, a former rural prosecutor like attorney Jenna Ellis, or a federal prosecutor turned mayor like Rudy Giuliani.

Post reports lawyer Cleta Mitchell was on call and is part of Trump's efforts to overturn the election. Nearly all lawyers who come from high end firms have refused to be involved. Unlike Giuliani, Powell, others, Mitchell is a partner at upper tier law firm @FoleyandLardner.

Foley & Lardner on Monday released a statement saying it was “aware of” and “concerned by” Mitchell’s “participation in the Jan. 2 conference call and are working to understand her involvement more thoroughly.”

“Foley & Lardner LLP is not representing any parties seeking to contest the results of the presidential election. In November, the firm made a policy decision not to take on any representation of any party in connection with matters related to the presidential election results,” the firm said. “Our policy did allow our attorneys to participate in observing election recounts and similar actions on a voluntary basis in their individual capacity as private citizens so long as they did not act as legal advisers.”

Mitchell did not respond to a Law&Crime email requesting comment.

In 2018, the McClatchy news service reported that House Democrats were seeking to interview Mitchell, whom it described as an “ex-National Rifle Association board member who had done legal work for the group.” It reported that Mitchell “had concerns about [the NRA’s] ties to Russia” and the NRA’s “possible involvement in channeling Russian funds into the 2016 elections to help Donald Trump.” At the time, Mitchell replied that any such theories were a “complete fabrication.” The NRA has since found itself under the legal scrutiny of the New York State Attorney General, but some probes into the NRA’s possible connections to Russia were blocked. A report by a group of Senate Democrats in September 2019 called the NRA a “foreign asset” of Russia.

Mitchell also reportedly told a group of GOP lawmakers to destroy their notes on gerrymandering from a summit in Austin, Texas, according to Slate.

“We’re going to teach you how to gerrymander.”

“My advice to you is: If you don’t want it turned over in discovery … get rid of it before you go home.”

In 2013, The Atlantic described Mitchell as “anti-gay” after she reportedly played a key role in banning a Republican gay rights group called GOProud from the high-profile Conservative Political Action Conference (CPAC). Mitchell, speaking to The Atlantic at the time, said she “doesn’t dispute her central role in the ban” but said she was acting in the best interest of the organization. From that report:

Cleta Mitchell is not a household name, even among conservatives. She’s part of the behind-the-scenes power-players that run the show in the Beltway. In addition to her role at the ACU, Mitchell sits on the board of the National Rifle Association and is a longtime attendee at Grover Norquist’s infamous Wednesday planning meetings.

What makes Mitchell’s role as a prime mover and shaker in conservative circles so fascinating, however, is that she hasn’t always been a conservative — or even a Republican. In fact, she entered politics as a liberal Democrat in a red state.

Mitchell’s politics slowly changed over time. The Atlantic insinuated that Mitchell’s reportedly anti-gay politics were the result of her first husband’s sexuality. She accused The Atlantic of writing a “hit piece.”

The Bradley Foundation, where Cleta Mitchell is a director, has spent over $3.5 million on election “integrity” work since 2012. The Sarah Scaife Foundation’s also spent almost $2 million pushing election fraud claims. Right-wing foundations are deep into this muck. https://t.co/0bHTnaTEZb

Mitchell assisted on behalf of the NRA in Sen. Mitch McConnell’s challenge to the McCain-Feingold campaign finance reform legislation. Earlier, she represented Steve Forbes in a lawsuit concerning who would become delegates to the 2000 Republican National Convention. She also appeared for the conservative advocacy group Americans for Tax Reform in a payday loan case. She assisted with litigation as counsel to True the Vote, Inc., against the Internal Revenue Service in 2016; True the Vote now bemoans “the silencing of conservative voices” and “[r]adicalized leftist organizations” in its current mission statement. The group is heavily involved with challenging Georgia’s election results, which were officially certified in favor of Joe Biden.