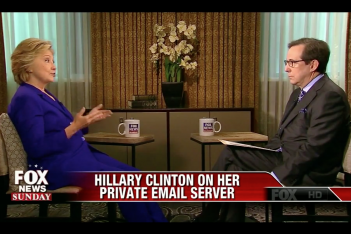 Hillary Clinton has had a very strange relationship with the truth, to put it charitably, when it comes to questions about her use of a private email server while serving as Secretary of State. The FBI’s decision to not charge her with a crime appears to have only further emboldened her willingness to blatantly misrepresent the truth.  What’s more, Clinton has refused to accept any responsibility for her actions, or even acknowledge any wrongdoing on her part in a sincere way.  All of this was on full display during an interview on Sunday when Fox News host Chris Wallace addressed issue.

After playing a montage of Clinton’s ever-changing claims about her emails, Wallace explained that FBI Director James Comey concluded what she said to the American people over the last year is just not true.  Clinton’s reply was simply stunning.

“Chris, that’s not what I heard Director Comey say, and I thank you for giving me the opportunity, in my view, clarify,” Clinton said.

Clinton continued, “Director Comey said my answers were truthful and what I said is consistent with what I have told the American people.”

Seriously?  That is how she is trying to spin the FBI Director’s findings?  This was unbelievable, even for Clinton. You have to give Wallace credit for keeping a straight face after hearing such an utterly ridiculous response.

Clinton went on to repeat her standard line about retroactive classification.  She then deflected responsibility on to the other 300 people with whom she exchanged emails during her tenure as Secretary of State.

Wallace then jumped back in and referenced the exchange between Director Comey and Congressman Trey Gowdy from a hearing earlier this month before the House Oversight Committee. In that exchange, Gowdy went point by point through past Clinton’s remarks about the emails and Director Comey confirmed what Clinton had said was just not true.

“[Director Comey] not only directly contradicted what you said, he also said in that hearing you were ‘extremely careless’ and ’negligent,’” Wallace explained to the Democratic Party nominee.

Clinton was now stumped in the face of such overwhelming evidence that she had, in fact, lied to the American people.

“Well, Chris,” Clinton sighed.  “I looked at the whole transcript of everything that was said.”

The implication here, of course, is that Clinton wants everyone to only focus on the fact that she was let off the hook, criminally.  In other words, Clinton wants you to believe that the lack of criminal charges shows she did not lie to the American people, repeatedly, over the past year.

This is an absolutely absurd and dishonest representation of the FBI’s findings in this matter.  Rather than finally just admitting what she said over the past year about her use of email was incorrect, she continues to deflect and distort the truth.  And she wonders why the American public does not trust her.

Then, perhaps realizing she couldn’t spin her way out this one, Clinton gave up on trying to rebut the FBI Director’s claims at all.  Instead, after giving a perfunctory apology for not using two email addresses, she moved on to blaming others for the fact that classified material was found on her server.

“I take classification seriously,” Clinton said.  “I relied on and had every reason to reply on the judgments of the professionals with whom I worked.”

She then sought to drive this point home.

“So, in retrospect, maybe some people are saying, ‘well, among those 300 people — they made the wrong call,” Clinton said (emphasis added).   “At the time, there was no reason, in my view, to doubt the professionalism and the determination by the people who work every single day on behalf of our country.”

While not quite as jaw-dropping as the claims she made earlier in this interview, this is still somewhat shocking, nonetheless.  Although she did say it was a “mistake” to “not use two different email addresses,” her subsequent statements show she is still unwilling to accept responsibility for her conduct.  Clinton is not sorry that her sloppy handling of classified material may have endangered national security, because, in her mind, she was not the one who put classified material on her servers.  She appears to believe, ultimately, that it was the poor judgment of others that got her into this mess!

Quite a thing for a would-be leader to say.