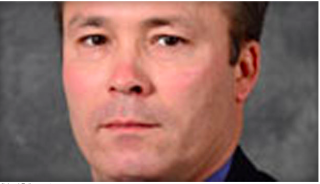 It’s getting hard to keep up with which Republican is the biggest jackass these days. West Virginian House Delegate and United Airlines pilot Michael Folk seems to be taking the lead. In a lame attempt to bolster his Twitter following, this tractor-mounted ignoramus tweeted the following to Hillary Clinton:

Putting aside the more obvious question, (“how can someone so illiterate be elected to public office?), I can’t help but wonder whether Folk’s constituents are proud of his bravado or embarrassed by his lack of decorum. I’m perfectly cool with anyone – elected official or otherwise – voicing his or her opinion about a political candidate. Hillary Clinton is a divisive figure, and I don’t begrudge anyone the right to make even the most critical commentary about her – so long as that commentary is informed and productive. But a legislator making an official post calling for a presidential candidate to be put to death? That’s crossing a line that should be visible even from West Virginia. He may have realized that as he later said, I regret the “tone” of my tweet.

When it comes to violence in America, you’re either part of the solution or you’re part of the problem. Downplaying the seriousness of death, even as political hyperbole, isn’t just obnoxious; it’s downright irresponsible. It spits in the face of those who are, at this very moment, suffering as a direct result of our homicidal culture. I expect such lax judgment from Klan members, from gang members, from the severely mentally ill. But not from active members of our government.

Last week, Ruth Bader Ginsburg said she “couldn’t imagine” the reality of a Trump presidency. That’s all. That she “couldn’t imagine” it. Americans went wild. Trump called for her resignation. Writers from news outlets across the country analyzed whether Ginsburg’s statement violated the tenets of judicial ethics. Conservatives everywhere were outraged over a sitting justice having opined on an election. Where is that outrage now? Where are the Conservative politicians who insist that theirs is the party of dignity and tradition? I know that GOP leadership has its hands full corralling Donald Trump right now, but it’d be a good idea if they kept some control over the immature clowns using social media with the judgment of a drunken middle-schooler.

United Airlines is apparently less tolerant of Folk’s asinine behavior. United removed Folk from the flight schedule pending an investigation into his remarks.  It’s good to know that airlines have some standards, even if West Virginia’s voters don’t.

Delegate Folk’s Twitter account has been made private since his little faux pas, but his profile picture is still the ultimate graphic of irony: a picture of an award presented to “The Honorable Michael Folk” for being the “2016 Friend of Government Accountability.”   Excuse me while I look for an appropriate vomit emoji.