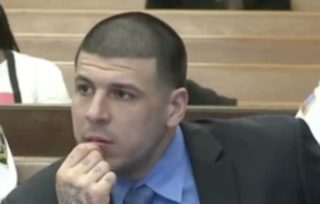 Testimony wrapped early Monday and will resume Wednesday.  No one will take the stand Tuesday, attorneys explained, because the next round of witnesses is not available until Wednesday.

The final prosecution witness, Robert Sattana, was an investigator who reviewed more than twenty-two hours of surveillance video from the Cure night club and its surrounding area.  One of the cameras at Cure, he explained, ran slower than the others, making synchronization difficult.  He admitted on cross-examination that the video surveillance did not show the spilled drink which prosecutors allege led Hernandez to gun down two people later that night.

Defense attorneys began their case-in-chief by calling two witnesses who had encountered Hernandez in clubs.

Antoine Salvador testified that he asked Hernandez for a photo at Cure.  Initially, Hernandez said no.  He then explained that it was his birthday.  Hernandez then agreed.  He described Hernandez as polite and calm throughout the evening.

Warren MacMaster, the street sweeper, testified in front of the jury for the first time.  He explained that he had seen another witness that night, a female calling for help, while he was cleaning the streets in the area of the murder.  He said that he told police about the witness; however, so far, the purported witness has not been found.

McMaster reiterated previous testimony about the police behaving “disrespectfully,” threatening to arrest him.  They told him to “shut [his] mouth and remain quiet,” he said.  Officers told him to empty his hopper on another road, where they searched through it for possible evidence.  He testified that the police ordered him not to talk to reporters; if he did, they said, they would arrest him.  He said that the police didn’t try to get him to change his story.

T.J. Gargasz, the VIP manager at Tootsie’s, the cabaret in Florida allegedly visited by Hernandez and his friend Alexander Bradley just before Bradley was shot in the face, testified that Hernandez was a frequent customer.  He said that Hernandez would stop by the club with other NFL players and friends.  Hernandez was “always good, polite, and well spoken,” Gargasz said.  He said he’d seen lots of “bad” people at the club, but that Hernandez always handled fan attention well, even with obnoxious fans.

The LawNewz Network will continue to carry court hearings and testimony live.