Does Mexican Boy Who Was Shot by Agent Across Border Have Constitutional Rights? | Law & Crime
Opinion

Does Mexican Boy Who Was Shot by Agent Across Border Have Constitutional Rights? 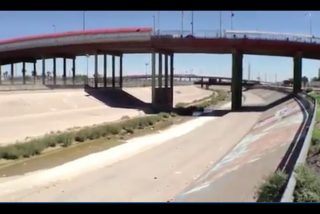 In tandem with the many Americans arguing over whether there should be an impenetrable wall between the U.S. and Mexico, the Supreme Court has decided to rule on whether, in a legal sense, one already exists.  SCOTUS has granted certiorari in Hernandez v. Mesa – a case in which a U.S. Border Control guard fatally shot an unarmed Mexican boy who had been playing at the U.S.-Mexico border in a dried-up portion of the Rio Grande. The boys had been playing a game in which they dared each other to run up the culvert’s northern incline, touch the U.S. fence, and then scamper back down to the bottom. Officer Jesus Mesa, Jr. fired the fatal shot from the American side, and fifteen year-old Sergio Hernández Guereca died sixty feet away, in Mexico.

Sergio’s parents have now sueed Agent Mesa in U.S. federal court, alleging that Mesa violated the Constitution by using excessive force. Note: there were other lawsuits filed where the United States is a defendant, but the case that will be reviewed by SCOTUS names only Agent Mesa as a defendant.

Everyone is pretty clear that Sergio’s death was tragic, and that Agent Mesa had been wrong to shoot him. There is going to be some legal battling over whether Agent Mesa is entitled “qualified immunity” from a lawsuit, based on the circumstances surrounding the shooting (originally, the story was that the boys had been throwing rocks at the border guards, but later, several videos surfaced showing that he hadn’t thrown any rocks). But the more pressing issue in the case isn’t about Agent Mesa—it’s about Sergio, and whether he (and by extension, his parents) ever had Constitutional rights upon which to base a lawsuit. While the circumstances surrounding the shooting are undeniably disturbing, they’re not directly relevant to the issue facing SCOTUS. Before any court even considers the question of whether Agent Mesa broke the law, SCOTUS must first decide whether the Constitution even applies.

Before anyone starts getting all hot and bothered about how we, as a country, allow illegal immigrants to have too many rights, let’s get a few things clear. First, Sergio Hernández Guereca was not an immigrant, illegal or otherwise. He was a fifteen year-old Mexican boy who lived in Mexico, and expected to stay in Mexico. Second, if a similar incident had taken place on American soil, there is little question that the child (even one who was there illegally) would be have been entitled t0 Fourth and Fifth Amendment rights.

There is also a broader legal context into which this case falls. Mexican authorities charged Agent Mesa with murder, but the U.S. has refused to extradite him. The Justice Department concluded that Mesa shouldn’t be federally prosecuted, because there is insufficient evidence to secure a murder conviction; and because Sergio died in Mexico, (and not in the United States), that there is no jurisdiction for a federal civil rights case.   The Mexican government, on behalf of Sergio Hernandez’ parents, brought this civil case, filed in the Fifth Circuit, because it’s basically the only option left.

The Mexican government, on behalf of Sergio Hernández Guereca, has asked the Supreme Court to rule on which of two legal approaches is correctly applied in the case of a border shooting – a “formalist” approach, or a “functionalist” one.   The “formalist” approach was the one relied on by the Fifth Circuit, when it dismissed the Hernandez case at the district level. The dismissal was based on United States v. Verdugo-Urquidez. In Verdugo-Urquidez, a Rehnquist-led SCOTUS ruled that Fourth Amendment protections against unreasonable searches and seizures do not extend to nonresident aliens in their own home countries. Under that case, the only people who are granted Constitutional rights are those who have a “significant voluntary connection” to the U.S. It would be impossible to prove that Sergio had a “significant voluntary connection” to the U.S. based solely on his playing near the border, so if that’s the standard that applies, the Fifth Circuit’s dismissal will stand. The only problem is that the precedent created by Verdugo-Urquidez related to a very different set of facts. The case was about the DEA’s search of a Mexican drug lord’s home in Mexico, after that drug lord had murdered a DEA agent. I totally get why SCOTUS wasn’t about to extend full Fourth Amendment protections. But let’s be serious – that’s a little different than the case of an unarmed fifteen-year-old shot in the head while playing near the U.S. border.

If SCOTUS nixes the application of the formalist approach, it may choose, the “functionalist” one it created in Boumediene v. Bush, a 2008 case. In Boumediene, the Court held that fundamental rights afforded by the Constitution extend to detainees held at the Guantanamo Bay detention camps, and that rights cannot be turned on and off like a light switch whenever it suits the government.

At the time, Justice Kennedy wrote,

“The Nation’s basic charter cannot be contracted away like this. The Constitution grants Congress and the President the power to acquire, dispose of, and govern territory, not the power to decide when and where its terms apply. To hold that the political branches may switch the Constitution on or off at will would lead to a regime in which they, not this Court, say ‘‘what the law is.”

The Ninth Circuit, encompassing the border states of Arizona and California, indicated last year that it would rely on a functionalist approach when deciding the issue of a border shooting: “The border of the United States is not a clear line that separates aliens who may bring constitutional challenges from those who may not.” Looking to the Ninth Circuit’s hints, a district court judge has permitted a civil case stemming from another border shooting of a Mexican teenager to proceeding in Arizona.

With such a clear split among the circuits, and with border shootings being shockingly common, it would seem that SCOTUS has duty to clarify the applicable rules. However, the Obama Administration disagreed and filed a brief urging SCOTUS to deny review (thus letting the Fifth Circuit’s dismissal stand), arguing primarily that civil lawsuits are just not the right remedy for cases of border shootings. In its brief, the government made some compelling points, not the least of which was that extending the protections of the Fourth Amendment to a foreign citizen in a foreign land could become an absolute mess for the American government. It also argued that there’s no way that American presence in the border area is the same thing as the kind of “de facto sovereignty” the American government has in Guantanamo Bay.

Still, it seems the the Supreme Court was more impressed with the Mexico’s brief on behalf of the slain boy, which argued,

“If left standing, the Fifth Circuit’s decision will create a unique no-man’s land—a law-free zone in which U.S. agents can kill innocent civilians with impunity.”

American attitudes toward the foreign-born have reached a crescendo during this election season. Candidates have polarized voters by characterizing immigrants as frightening perils to our safety, and alternatively, as the lifeblood of the American spirit.   But we cannot adequately cast who foreigners will be relative to us until we grasp who we are as a country. Maybe we are a nation that holds itself to the highest standards of justice, irrespective of who is on the receiving end of that justice. Maybe we are a nation that reserves our best liberty only for our American brothers and sisters. Or maybe there is some third hybrid option.  We often speak of “Constitutional protections” or “Constitutional rights,” but the Constitution confers rights only in that it limits the power of the federal government. Viewed through such a lens, I find it impossible to logically conclude that an American Border Patrol agent applied “excessive force” when killing an American child, but not when killing a Mexican one. The only thing certain about the outcome of Hernandez v. Mesa is that it will say more about our Constitution, our government, and our people than it ever could about Sergio Hernández Guereca or the Mexican people.