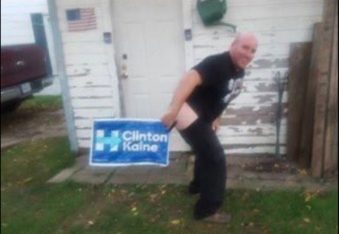 A viral tweet showing a picture of an Iowa reserve police officer mooning and pointing a gun at a Hillary Clinton/Tim Kaine yard sign has sparked quite the debate on social media lately.  Much of the debate centers on whether the police officer should be disciplined for his actions or if his conduct was protected by the First Amendment.

According to news reports, the officer pictured in the tweet has been identified as Oelwien, IA reserve police officer Jay Perkins. Oelwien Police Chief Jeremy Logan recently told the Des Moines Register his department is currently conducting an “internal review” into the incident.

Here is Officer Perkins, a cop w/ the Oelwein Police Dept. in Iowa, wiping his ass w/ a gun held to a @HillaryClinton sign…#PodestaEmails7 pic.twitter.com/HpvMcF81HP

Many on social media have called for Officer Perkins to be fired, or say that he should at least be disciplined for his conduct.  A final decision on the matter will likely be made by Chief Logan, pending the outcome of the internal review.

“While we support the right of freedom of speech and expression, we encourage our staff to do so with professionalism,” Chief Logan told the newspaper. “Jay Perkins has been a dedicated and sound volunteer for our community and this action does not reflect what we have seen from him in prior years. We take matters such as this seriously as we understand the impact that this can have on the trust that is placed upon us by the public.”

However, some of Chief Logan’s more recent statements to the media indicate that he may have already decided not to discipline Officer Perkins over the incident.  On Monday, Chief Logan reportedly the newspaper he had “addressed the matter” and declined to respond to requests for additional details.  Officer Perkins’ picture also remains up on the department website.

Furthermore, a legal expert recently interviewed by the Des Moines Register seemed to indicate discipline would not be appropriate, under these circumstances.

Rita Bettis, the legal director for the Iowa ACLU, recently explained to the newspaper that the Supreme Court has held officers generally must be acting in an “official capacity” in order to be subject to discipline for political speech.  Bettis said, factors to be considered when determining whether an officer is acting in an “official capacity” include whether the officer was in on duty and/or in uniform at the time of the incident.

As you can see in the photo, Officer Perkins is not wearing his police uniform in the photo and was reportedly not on duty at the time of the incident.  Additionally, Chief Logan has previously said the gun seen in the photo is not a department issued weapon.

All of those factors weigh in Officer Perkins’ favor that he was not acting in an official capacity at the time of the incident.  In that case, he would be entitled to all of the same rights as any other citizen that protect him from retribution for engaging in political speech.