5 Things Trump, Clinton and Chris Wallace Got Wrong About SCOTUS at Debate 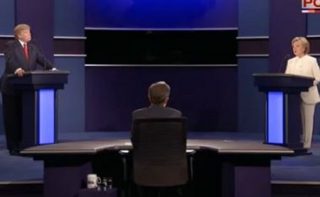 Well, that was fun. And by “fun,” I mean, “a smorgasbord of misinformation.”  Last night’s debate was chock full of suggestions, assertions, and promises relating to the Supreme Court that were just plain wrong.  Here were some of my favorite erroneous sound bites:

I doubt that Chris Wallace even realized that his question set up the candidates for incorrect answers. The right response would have been, “As President, it would not be my job to interpret law, but only to enforce it.” Of course, the candidates could have discussed the merits of different Constitutional philosophies, such as originalism, textualism, pragmatism, or intentionalism – or about the value of having a bench with varied philosophical voices. But neither candidate even tried to educate the moderator or the public about the role of the Supreme Court; instead “I’ll appoint liberal justices,” and, “I’ll appoint conservative justices,” were the answers that allowed the public to proceed dimly in its usual lack of knowledge about how SCOTUS works. The question was the wrong one to ask, and Chris Wallace did nothing to call the candidates out on their answers.

Well, actually, no. That’s Congress. The Supreme Court, as the judicial branch, doesn’t represent us at all. The Court is meant to be a team of the nation’s keenest legal minds who will do a complex and difficult job. Justices are not chosen because their votes reflect what we would have done. Unlike members of Congress, who can often be expected to vote down party lines, Supreme Court justices can be unpredictable. The whole reason why justices are lifetime appointees is that we want them to make decisions based on what they think is right, not based on what would make constituents happy. It is their nuanced understanding of law and the many interpretive philosophies they bring to the bench that makes their wisdom so valuable.

It’s possible that Hillary meant that the highest federal bench should simply reflect the diversity that comprises our country (or at least as much diversity as nine Ivy League law school grads could represent). That would be definitely be a good idea, but if that’s what she meant, she probably should have said so.

Amusing as it was to hear Donald Trump tell the tale of how he smacked down the Notorious RBG, and how she slinked away in shame, it just isn’t true. In July, Justice Ginsburg made some public comments where she said that she couldn’t imagine a Trump presidency, and that he was an egotistical, inconsistent faker. For a sitting justice to make public comments about a presidential candidate is highly unusual, and Ginsburg was harshly criticized for having done so. Later, she issued a statement saying that her comments had been “ill-advised” and that, “”Judges should avoid commenting on a candidate for public office. In the future I will be more circumspect.”

It wouldn’t have been an apology if Trump had said, “in the future, I’ll avoid pussy-grabbing,” and it wasn’t an apology from RBG.

Yeah, that’s not how litigation works. Supreme Court justices don’t walk into the courtroom and say, “hey, I love guns, so I’m going to rule in favor of whichever party is an NRA member.” Cases that reach the Supreme Court present complex legal issues that often lack simple answers. Characterizing the Supreme Court’s job as “blink once for guns, blink twice for no guns” is oversimplifying its role in government to a degree that is both absurd and dangerous. Plus, judges don’t play favorites with the Bill of Rights. There’s nothing to feel strongly about. The Second Amendment exists, end of story. Justices can feel however they wish, but in the end, their job is to interpret laws.

Okay, so this guy has never read a SCOTUS opinion. And he definitely hasn’t read Roe v. Wade. These people don’t order lunch without creating a thirty-page balancing test or deferring to precedent. Trump may live in a world filled with knee-jerk reactions, but such flippancy is as antithetical to Supreme Court’s very existence.

Although gaggles of the uninformed think Roe said, “all abortions are legal, all the time,” that’s not remotely what the case actually did. In real life, Roe set out Constitutional limitations for how state law may legislate about abortion. Later case law further refined Roe’s rules; bottom line, states are not permitted to completely outlaw abortion, but they are permitted to regulate the hell out of it. Every SCOTUS case in which abortion is a central issue requires a state statute to have sparked litigation. For that litigation to reach the Supreme Court, it is expected to raise a novel issue of law. Then, the Court must grant certiorari. And only then would the Court be in a position to even consider a decision that relates in any way to Roe v. Wade. Even if such a case were to actually reach the justices, there’s a little (read, giant) obstacle called stare decisis that could be a problem for Roe-haters. Judges, by their nature, are conservative jurists. Radical change is the job of those who create law, not those who interpret it. And if judges are generally resistant to change, SCOTUS justices really, really avoid it when they can. Sure, it’s possible that a case will work its way up to the Supreme Court that will overcome all the necessary hurdles to effectuate a reversal of Roe v. Wade – but such a change would be pretty far from “automatic.”

This is an opinion piece. The views reflected here are just those of the author.