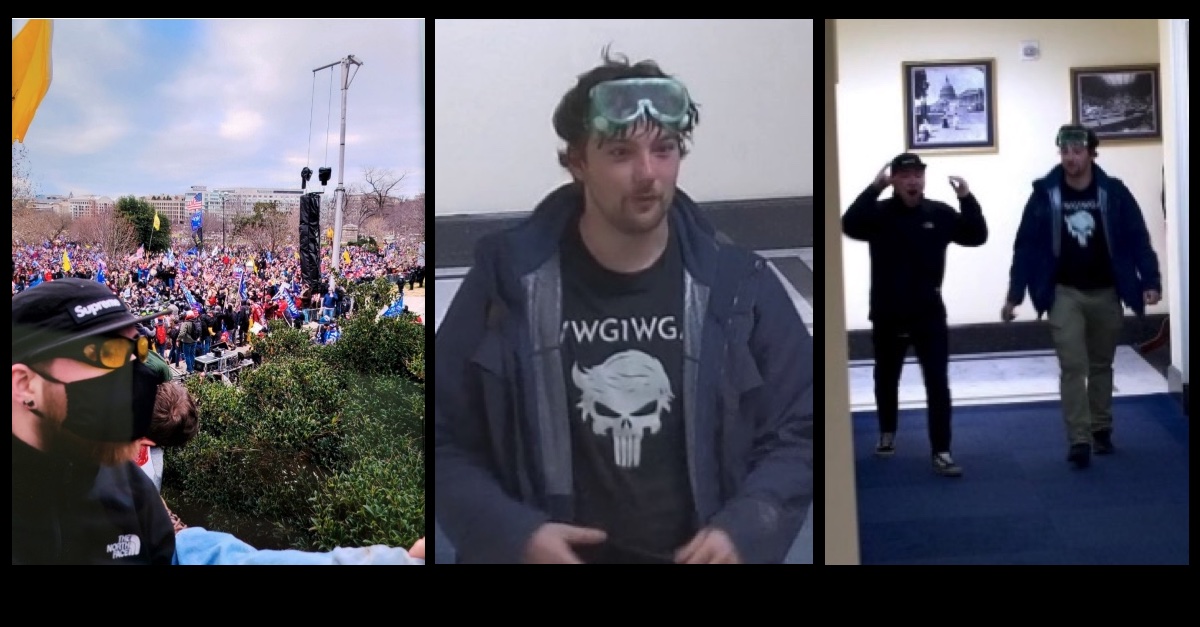 Two Pennsylvania men who were seen gathering documents from the floor of an abandoned hallway in the Capitol building on Jan. 6 have been sentenced to 30 days behind bars.

Mitchell Vukich, 26, of New Brighton, and Nicholas Perretta, 27, of Baden, pleaded guilty in September to one count of parading, demonstrating, or picketing in a Capitol building. That charge, a misdemeanor, carries a sentence of up to six months in prison; sentences for Jan. 6 defendants convicted on this charge have ranged from probation and home detention to the maximum six months, according to the DOJ.

According to the charging documents, Vukich and Perretta made their way into the Capitol after witnessing assaults on law enforcement. They were seen on surveillance video on the third floor of the Capitol building where, according to the statement of facts, “few other rioters ventured and where many staff offices are located.”

They were also seen on camera picking up paperwork from the floor of a hallway, although they both later threw it away.

Prosecutors had asked that both defendants be sentenced to one month behind bars. Attorneys for the men argued that probation was appropriate because they had not committed any serious violent acts, and cast their clients as two naive and curious people who got caught up in the crowd of Donald Trump supporters seeking to stop the count of Electoral College votes and bock the certification of Joe Biden’s win in the 2020 presidential election. Essentially, the defense attorneys argued, the defendants simply wanted to see what was happening.

“What you did on Jan. 6 is no caper,” Chutkan said. “It was no ‘Let’s go check out what’s happening.’ This was a violent attempted overthrow of the government.”

Chutkan, a Barack Obama appointee, said that the defendants’ mere presence in the Capitol on Jan. 6 empowered others in the riotous mob that day.

“There’s no mob without a crowd,” Chutkan said. “And not everybody needs to be beating police officers and stealing property to be part of a mob. Those people who were [acting violently] were emboldened and encouraged by people like Mr. Perretta and Mr. Vukich.”

Without the defendants, Chutkan added, “This mob wouldn’t have gotten as far as they did[.]”

Chutkan said that Vukich and Perretta didn’t just happen to stumble upon the chaos at the Capitol, and that they expected more than just a peaceful rally.

“This isn’t Bill and Ted’s Excellent Adventure,” she said, referring to the 1989 Keanu Reeves comedy about two underachieving high school students who put together a history report with the help of a time machine, George Carlin, and an assortment of historical figures whose names were invariably mispronounced by the protagonists that brought them to San Dimas, California. “They had with them eye protective wear, goggles and yellow-lensed glasses[.] That’s not normal eyewear. That’s what you wear to protect your eyes from tear gas or pepper spray. That’s not what you put on your faces when you just go to see what’s going on. That’s what you put on your faces when you expect resistance from law enforcement.”

Chutkan also pointed to text messages that indicated the men were celebrating having breached the Capitol as lawmakers and Congressional staff hid in protective bunkers. She also drew attention to a near-encounter they had with a reporter in a hallway.

“Can you imagine what that reporter was feeling?” Chutkan asked. “She was doing her job … She’s there by herself, hearing reports of people being shot, hearing people screaming. She’s by herself and she turns a corner and encounters these two men in their goggles. Imagine for a moment how that must have felt.”

Chutkan said that under different circumstances, Vukich and Perretta might not have left the Capitol building alive.

“They are lucky,” Chutkan said. “There are many people that I see in front of me in my courtroom who, if they had been in that position, they would have been lying there shot on the floor.”

According to a report by Washington CBS affiliate WUSA, Vukich hosts a podcast called “Down the Rabbit Hole with Mitch Vuk.” The podcast focuses on conspiracy theories, and recent episodes have covered topics such as “Roswell and other Shadow Government Coverups” and the “Rothschild Takeover,” an apparent reference to an anti-Semitic conspiracy theory about the Jewish Rothschild family, and “Global Satanic Cult.”

That last topic could be a reference to QAnon, the wide-ranging conspiracy theory that that casts Trump as leading a fight against an underground, far-reaching cabal of Satan-worshipping child sex abusers and high-profile Democrats. Vukich appears to be an adherent, as he is seen inside the Capitol wearing a T-shirt emblazoned with “WWG1WGA,” an abbreviation of the QAnon slogan “Where We Go One, We Go All.” The same shirt also appears to show a skull (familiar to fans of the comic book antihero, “The Punisher”) but with Trump-like hair on top of it.

Chutkan said that she would allow Vukich and Perretta to self-surrender to serve their time on a date determined by their lawyers and law enforcement officials.

You can read the government’s statements of facts for Vukich and Perretta, below.