‘QAnon Shaman’ Pleads Not Guilty, Asks Federal Judge for Organic Food Behind Bars After Not Eating All Week 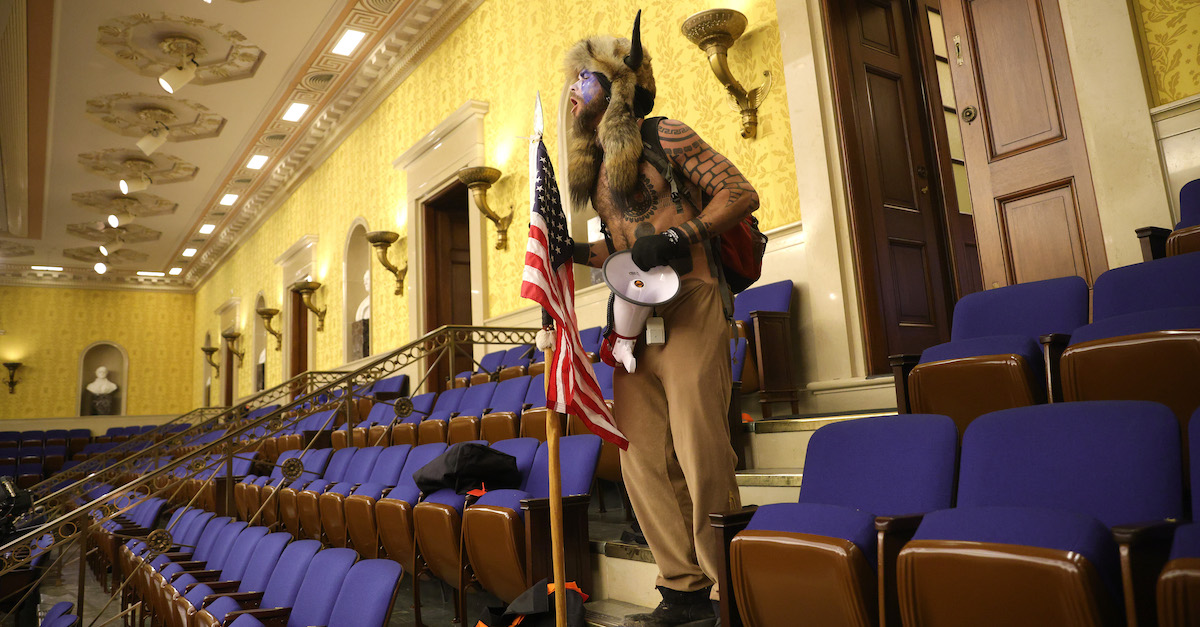 An attorney for Jacob Chansley, the so-called “QAnon Shaman” who was photographed profusely during a siege on the U.S. Capitol on Jan. 6, asked a federal judge on Friday to ensure Chansley was being fed organic food while in jail in Washington, D.C., pending trial.

Attorney Al Watkins told the judge that his “client is a man of faith in Shamanism — a long-standing faith — and his dietary restrictions” connected to that faith required that he only eat food that is organic.

Watkins cited “health issues” and an “unpleasant” and “protracted” “bacterial response” if Chansley eats food that is not organic. He said that Chansley has not eaten since Monday.

A government attorney said she expected that Chansley would get the same “treatment all defendants get” at the D.C. jail — a reference to religious liberties being accommodated behind bars. The government did not object to Chansley’s dietary request.

“I’m going to be very humble with you,” Watkins said when asked by the judge for more information about Shamanism. “I have a wholesale absence of appreciation for the nuance — nuances of shamanism. I am aware of the fact that it is recognized as a faith . . . closely associated with nature and wildlife and spirits.”

Watkins said he studied geology and that his client could expound about Shamanism “with a greater degree of detail” if necessary in the future.

“I understand,” the judge said. “I think we’ll all learn more.”

Conversation then turned to a “mid-century” art piece hanging behind Watkins in the video call. Watkins knew a lot more about that.

Watkins said his primary concern Friday was “health and safety of my client” with regards to “food consumption” and that he hoped the matter would be addressed quickly.

Watkins also said that the D.C. facility where Chansley is being held has been “overwhelmingly” cooperative thus far.

The judge praised all parties present and said they should “continue to cooperate together” because doing so “makes everything better for the system and for the court.”

According to online federal court records, the proceeding, an arraignment, included a “not guilty” plea by Chansley.

The first 10 minutes of the proceeding were not audible to reporters who listened via teleconference. Court proceedings largely remain restricted due to the COVID-19 pandemic.

The attorneys present put off more weighty legal matters, such as whether Chansley would request a speedy trial and whether or not a bond review was necessary.

A status conference was scheduled for March 5 at 10 a.m.

The organic food request is nothing new. Chansley didn’t eat in Arizona while incarcerated there.

A federal judge in Arizona ordered Chansley moved to the D.C. district on Jan. 19. All of the federal prosecutions of alleged D.C. rioters are being handled in the nation’s capital. Rule 18 of the Federal Rules of Criminal Procedure requires prosecutors to prosecute cases in the “district where the offense was committed.” The Sixth Amendment analogously requires the jury to be selected from “the state and district wherein the crime shall have been committed.”