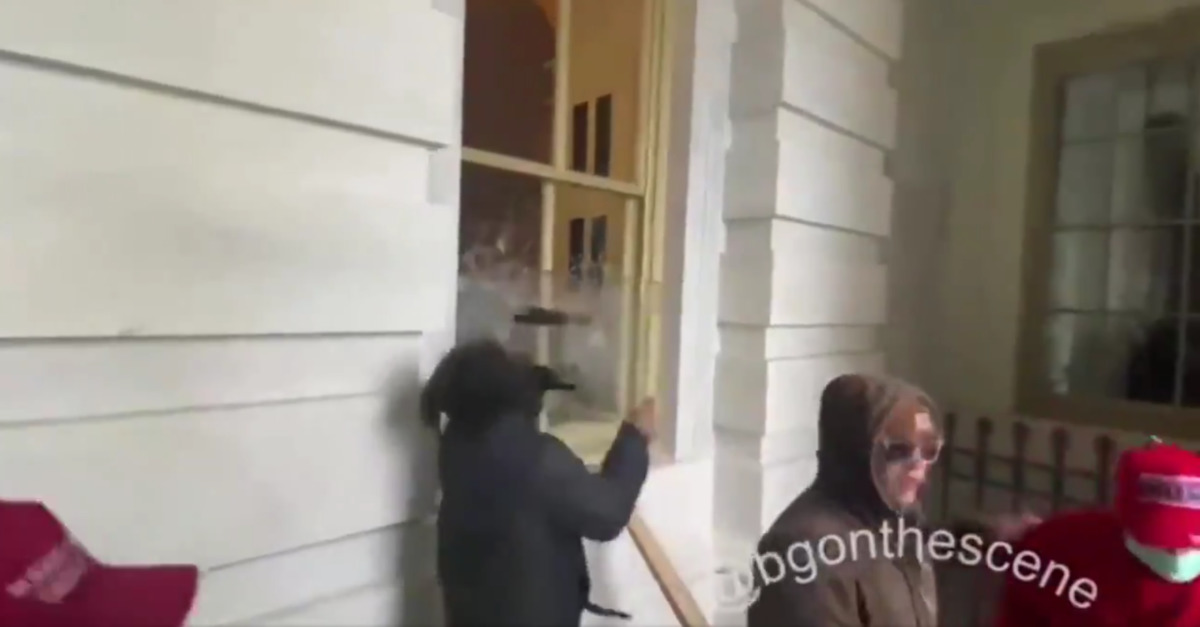 Proud Boy Dominic Pezzola made his first appearance in federal court on Wednesday after being charged with three federal crimes connected to his alleged participation in the pro-Trump attack on the U.S. Capitol Complex earlier this month.

The gears of justice won’t be moving at a brisk pace in his case. The alleged rioter looks slated to remain locked up into next week at least, pending a bail hearing scheduled for this coming Monday.

Rochester, New York-based attorney Michael P. Scibetta entered his appearance as lead attorney for Pezzola, who can be seen in publicly-available footage using a large, clear shield to break a window of the Capitol Building on Jan. 6 before climbing through.

Law&Crime reached out to Scibetta for comment, but no response was forthcoming at the time of publication.

“The individual with the shield is depicted in the video as entering the Capitol building, while still holding the shield,” an affidavit filed by law enforcement last week notes.

The FBI received a copy of that video, as well as still photographs of the incident, two days after the failed insurrection. Following a “review of open source photographs,” law enforcement claims to have identified Pezzola by way of t-shirts affiliated with the far-right Proud Boys movement — as well as the U.S. Marine Corps.

From the FBI’s affidavit:

The U.S. Attorney for the District of Columbia also cited Pezzola’s Proud Boy credentials in a press release announcing his arrest last week, noting that the alleged rioter is widely known as “Spaz” and “Spazzo.”

“Pezzola bragged about breaking the windows to the Capitol with a Capitol Police shield,” the D.C. U.S Attorney’s Office said. “Pezzola and others stated that they would have killed anyone they got their hands on, including Speaker of the House Nancy Pelosi and Vice President Michael Pence.”

An unnamed witness is said to have provided investigators with Pezzola’s alleged commentary and desires with regard to Pelosi and Pence–both of whom were in the Capitol on the day in question during the ceremonial tallying of Electoral College votes for the 2020 presidential election.

According to that witness, Pezzola bragged about breaking the Capitol window and entering the building–while also allegedly confirming that the shield he used belonged to the U.S. Capitol Police.

“[The witness] stated that other members of the group talked about things they had done during the day, and they said that anyone they got their hands on they would have killed, including Nancy Pelosi,” the affidavit continues. “[The witness] further stated that members of this group, which included ‘Spaz,’ said that they would have killed [Vice President] Mike Pence if given the chance. According to [the witness] the group said it would be returning on the ’20th,’ which [the FBI] takes to mean the Presidential Inauguration scheduled for January 20, 2021, and that they plan to kill every single ‘m-fer’ they can.”

Pezzola was arrested on Jan. 15, however, several days before President Joe Biden was sworn into office.

During his Wednesday appearance, the self-described Proud Boy was ordered to be detained pending a bail hearing set for Feb. 2.

If convicted as charged, Pezzola faces over 10 years in prison.