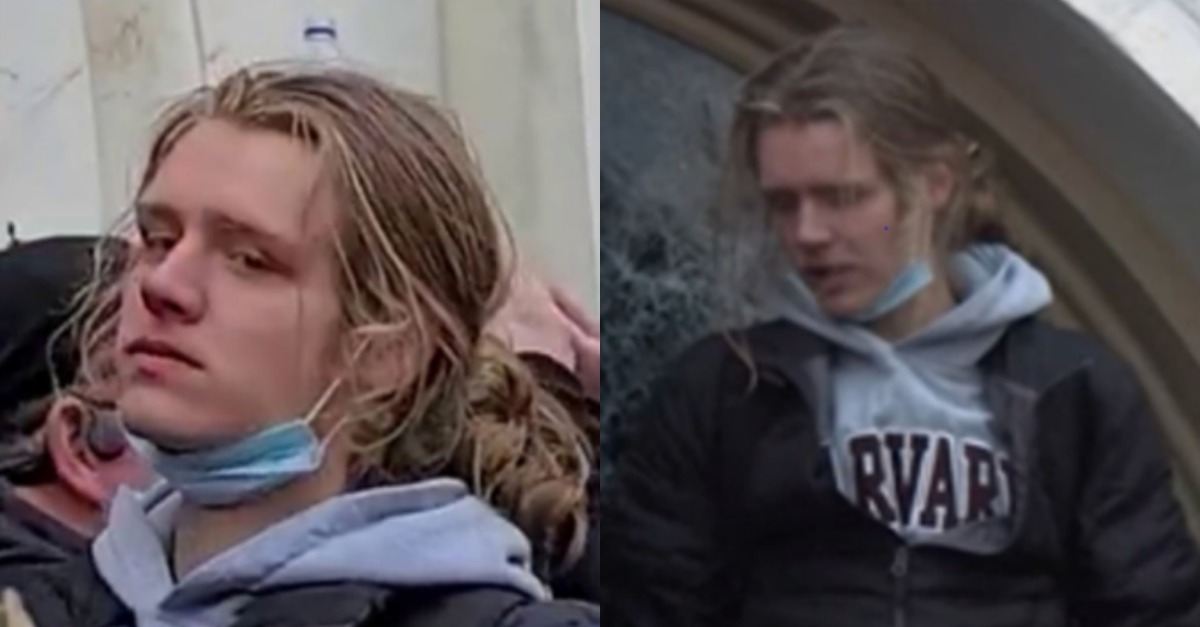 In a case unsealed on Tuesday, federal agents charged 19-year-old Aiden Henry Bilyard with a several federal crimes, including civil disorder, assaulting law enforcement, destruction of government property, engaging in physical violence in a restricted building with a dangerous weapon and other offenses.

Several other members of the pro-Donald Trump mob have been charged with similar conduct, including the use of bear spray—the same alleged weapon of choice used against the late U.S. Capitol Police Officer Brian Sicknick.

According to the U.S. Department of Justice, Bilyard was arrested on Monday in Raleigh, N.C. and made an initial appearance in an Eastern District of North Carolina court later that day before being released.

The defendant is accused of attacking multiple D.C. and Capitol police officers with bear spray, a stronger version of pepper spray, on the Lower West Terrace of the U.S. Capitol during the late afternoon on the day in question in order to facilitate the building’s eventual breach by members of pro-Trump mob.

In court documents obtained by Law&Crime, an unnamed FBI agent identified Bilyard by way of a police officer’s body camera.

The federal statement of facts describes the defendant:

[O]ne such individual, a white male, thinly built, approximately 18 to 25 years old, with long “dirty blonde” hair, and wearing grey sweatpants, a black “puffer” style jacket, and a disposable light blue face mask over his mouth. At approximately 2:35 p.m., that individual can be seen standing in the crowd of rioters in a restricted area, the Lower West Terrace, holding what appears to be a large gold-colored canister.

“Officer L.H.’s body-worn camera then shows the individual pointing the nozzle of the canister toward a line of uniformed law enforcement officers from both the D.C. Metropolitan Police Department and the U.S. Capitol Police and activating the propellant, discharging an orange-colored liquid spray against the group of officers,” the filing continues.

The officer said the bear spray “caused him extreme pain and incapacitated him” and was “far stronger than any chemical munition he had previously been exposed to,” the complaint goes on to say.

But, according to the FBI, that was just the start of Bilyard’s unlawful activities amid the anti-Joe Biden chaos.

Citing “open-source videos taken during the riot,” the court document further identifies the defendant as person wearing “a grey sweatshirt with maroon lettering that appears to spell the word ‘Harvard’ is visible under his black ‘puffer’ jacket,” who has subsequently been dubbed “#HarvardSweats” by online sleuths who have spent considerable effort helping authorities identify participants in the pro-Trump effort to stop the counting of Electoral College votes.

“At one point, the individual referred to as #HarvardSweats can be seen standing next to and below an individual who is striking the glass [of a large window on the side of the Capitol building] with what appears to be a small axe, while encouraging him by shouting, “’Window! Window! Break it!’ and clapping,” the FBI alleges.

The court document details an alleged effort to actually and eventually break that large glass window:

In another open-source video, the individual dubbed #HarvardSweats is observed holding an object, which appears to be a different cannister of chemical irritant, in his right hand. Also visible in the image is a silver-colored watch with a brown strap on his left wrist. #HarvardSweats then appears to nod to an unknown person below him who hands him a baseball bat. He then turns and attempts to hand the bat to [another alleged rioter] to assist breaching the window.

In yet another open-source video, #HarvardSweats is observed himself using the same bat to strike the lower portion of the glass window in an attempt to breach the U.S. Capitol Building.

Moments later, the male dubbed #HarvardSweats has successfully shattered the lower glass portion of the window. He then turns to face the crowd and appears to clap and shout in an apparent act of encouragement for people to start entering the U.S. Capitol Building through the window.

After the window was broken, authorities allege, Bilyard and “many” other people then accessed a room within the building.

During an interview with the FBI in early August, the defendant, who was attending basic training for the U.S. Air Force at the time, was allegedly shown clips from some of the above-referenced videos and said, “I think this is where I take my leave.”