Minnesota Man Charged in Jan. 6 Capitol Siege Was Prepared to Die and Leave Four Kids Behind: ‘I Was at Peace with That Knowledge’ 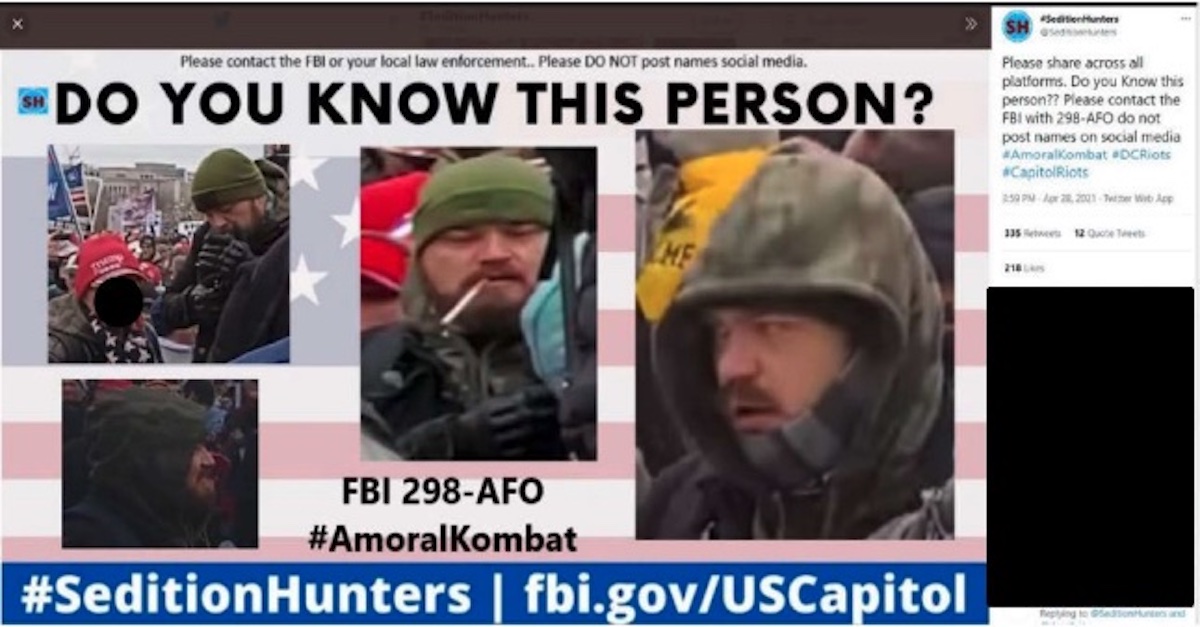 The FBI says that Brian Mock went to the U.S. Capitol on Jan. 6 unsure of what he would face, but as he shared on social media just days later, he was prepared to fully commit to whatever came his way — even death.

“I went to the Capitol not knowing what to expect but said goodbye to my 4 children, not sure if I was going to come home,” Mock wrote on Facebook on Jan. 8, according to federal documents charging Mock with multiple crimes. “I was at peace with that knowledge.”

Mock, 43, is one of the latest people to be arrested for crimes related to the siege on the U.S. Capitol, according to a statement from the Justice Department on Friday.

Citing court documents, the DOJ said that Mock was captured on body-worn camera footage “repeatedly assaulting multiple law enforcement officers who were trying to protect the building from rioters.” Mock reportedly shoved a U.S. Capitol Police officer to the ground and kicked him as another rioter grabbed the officer’s legs. Mock also allegedly “cornered” Capitol and Metropolitan Police officers, and shoved another Capitol police officer to the ground. 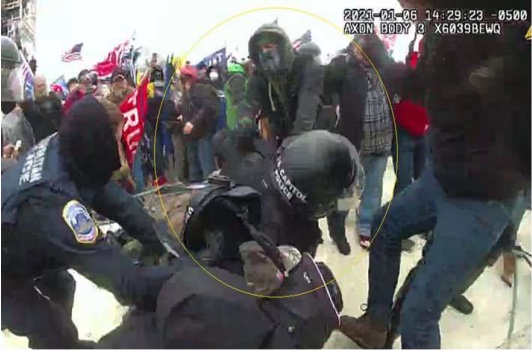 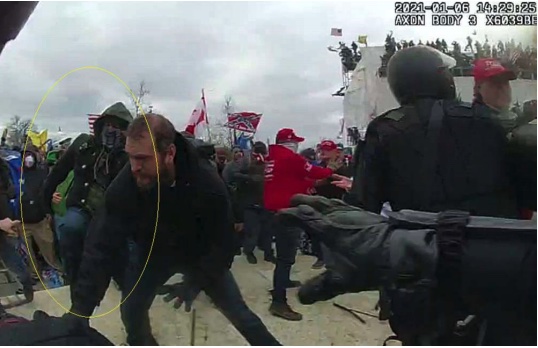 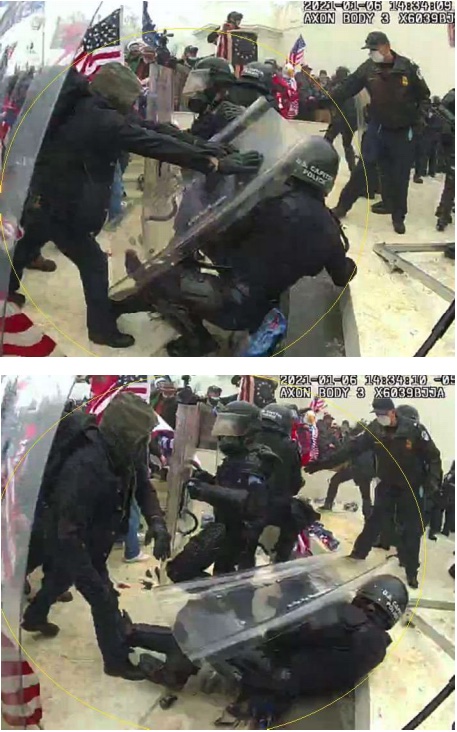 As the mob “continued to advance and assault other officers,” Mock also “picked up multiple [Capitol Police] riot shields and passed them back to other members of the violent crowd,” according to the DOJ. 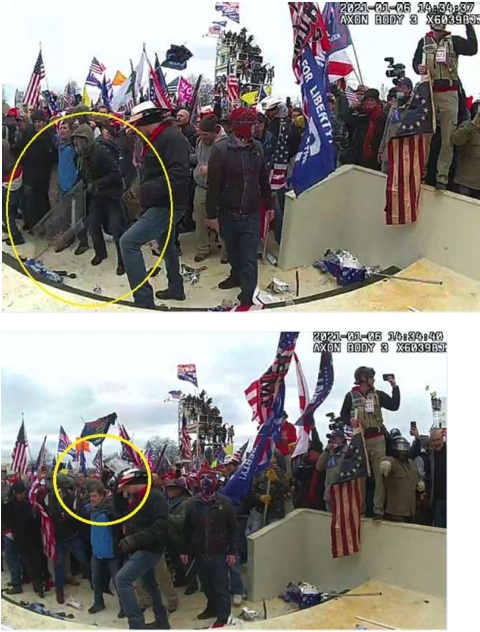 According to the DOJ, Mock’s girlfriend posted pictures and bragging about her and Mock’s Jan. 6 experience. 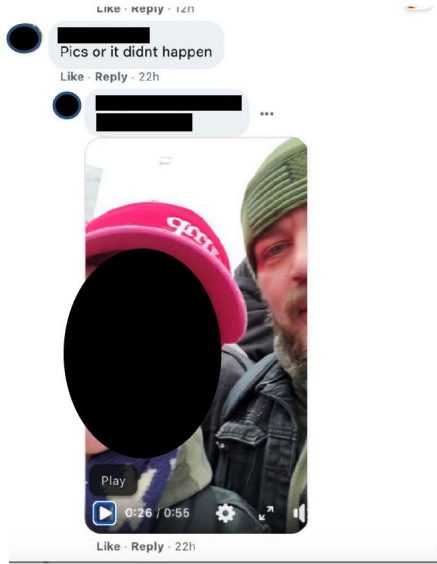 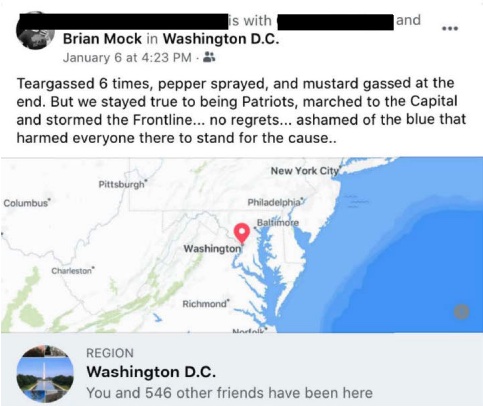 “Teargassed 6 times, pepper sprayed, and mustard gassed at the end,” Mock’s girlfriend allegedly wrote. “But we stayed true to being Patriots, marched to the Capital [sic] and stormed the Frontline… no regrets… ashamed of the blue that harmed everyone there to stand for the cause..”

The charging documents also show that Mock made sure to take in some of the sights Washington had to offer ahead of joining the crowd of Donald Trump supporters and violently breaching the U.S. Capitol Building.

“Before we went to the Capital [sic]… we did a little sight seeing…” read a caption of a Facebook post, where Mock is seen posing in front of the Minnesota pillar at the World War II Memorial. 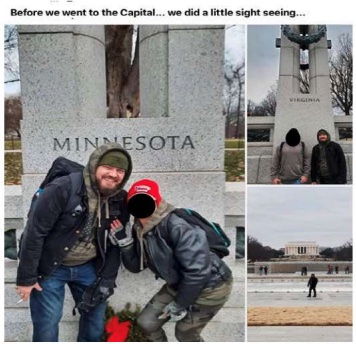 FBI investigators confirmed Mock’s identity with at least eight different witnesses, including one who told the FBI that Mock “went to DC specifically for this. He is home bragging about beating up cops and destroying property in the capital [sic],” according to the charging documents.

Another witness told the FBI that they had feared Mock was a “radical” who would participate in violent protests in Minnesota. The same witness said that Mock and his girlfriend were at the “DC Capitol attack, did not enter the Capitol but were actively removing fencing … they went to the Capitol to protest and both were tear gassed.” This witness said that Mock had a “criminal history involving guns,” which the FBI investigator confirmed in the charging documents.

“According to Witness 8, MOCK told Witness 8 he ‘beat the shit’ out of a police officer.’ Witness 8 showed me text messages between Witness 8 and MOCK, where MOCK admits to his participation in the riots,” documents said.

Mock faces at least four charges, including assaulting, resisting, or impeding certain officers, obstruction of law enforcement during civil disorder, and acts of physical violence in the grounds or any of the Capitol buildings.

He made his initial court appearance at the U.S. District Court in St. Paul on Friday afternoon.

According to the DOJ, some 465 people have been arrested on charges related to the Jan. 6 Capitol siege, including over 130 individuals charged with assaulting or impeding law enforcement.

Read the affidavit, below.