Man Who ‘Vehemently Opposes Joseph Biden as President’ Charged Alongside Friend Who Was ‘Sick With Anxiety’ Following U.S. Capitol Attack 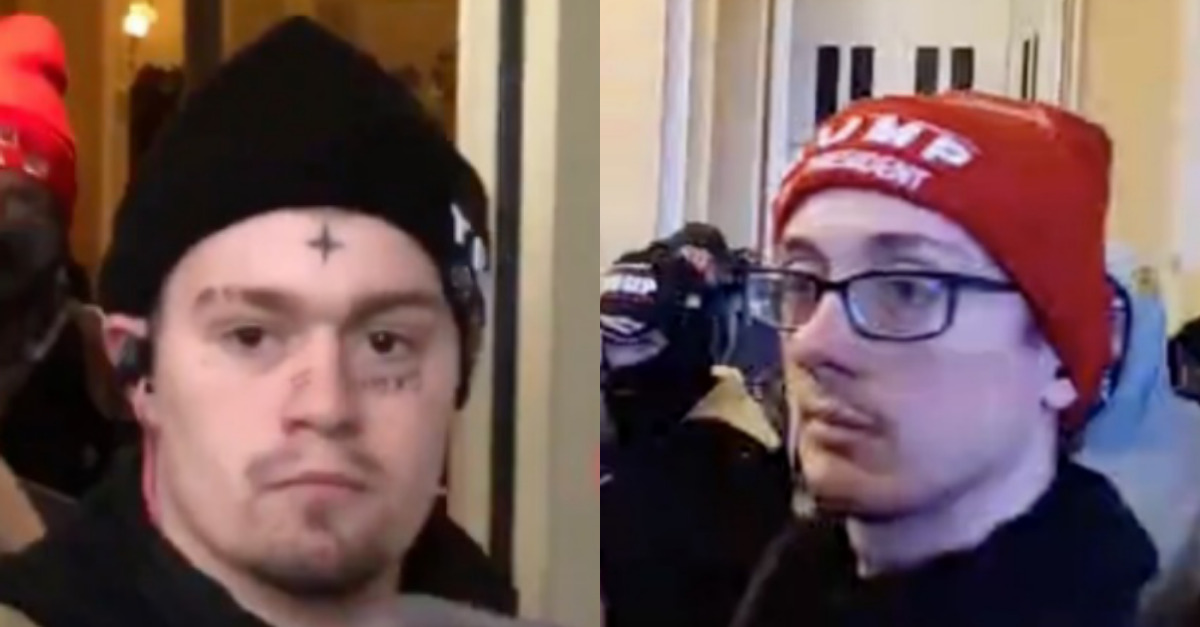 The FBI arrested two members of the mob that stormed the U.S. Capitol Complex in early January on the strength of social media evidence. A two-defendant criminal complaint filed in the U.S. District Court for the District of Columbia on Monday alleges that Joshua Wagner and Israel Tutrow unlawfully entered the national seat of legislative government after attending former president Donald Trump’s “Stop the Steal” rally because, according to one witness, Wagner “vehemently opposes Joseph Biden as President.”

A statement of facts filed Tuesday alleges that Wagner was “featured as ‘#34’ in a Be On the Look Out (BOLO) issued by the FBI to assist in the identification” of individuals involved in the Capitol siege and is shown in that digital equivalent of a wanted poster “wearing glasses and a red beanie bearing ‘TRUMP’ in white lettering.”

Tutrow was also apparently easy enough for law enforcement to pick out of the hundreds-strong crowd who stormed the Capitol due to his “facial hair and distinctive facial tattoos” as well as his own “black beanie that appears to bear ‘TRUMP’ in white lettering.” Both men allegedly appear in various publicly available photos and videos.

The FBI also relied on photographs of each men culled from Indiana state records and Wagner’s own Facebook page to make their case.

The court papers allege that Wagner “self-identified to law enforcement” through his attorney on Jan. 9. And the FBI investigation, according to the statement of facts, eventually turned up Tutrow as “Wagner’s associate,” apparently by way of a mutual friend who turned state’s evidence as witness number one.

According to the FBI’s witness, Tutrow quickly had misgivings about what transpired on that pivotal day that left five dead and dampened enthusiasm for even some of the 45th president’s most stalwart acolytes within the institutional GOP.

“Around 9 p.m. [on the night of January 6], Tutrow messaged [the witness] indicating being sick with anxiety following the riot at the U.S. Capitol,” the statement of facts alleges.

Wagner, for his part, later told the witness he “was very scared and worried,” but apparently only after being identified on the digital wanted poster, according to the FBI.

As for ideological motivations, the duo are simply alleged to have been swayed by their disdain for the 46th president–and casts Wagner as the ringleader.

“[The witness does not know either individual to have an affiliation with hate groups, but is aware that Wagner vehemently opposes Joseph Biden as President,” the statement of facts claims. “[The witness] believes that Wagner asked Tutrow to attend the rally with him. To [the witness’s] knowledge, they did not attend the rally with the intent to commit violence or cause a riot.”

The Facebook meme page Occupy Democrats also plays a prominent role in the FBI’s case. A video released by the activist posting group contains what is alleged to be a close-up photo of Tutrow emblazoned with the bold-face caption: “WANTED for sedition, treason, rioting, looting and domestic terrorism.”

If convicted as charged, each man faces three years in prison.