Kellyanne Conway’s Daughter Just Asked People Not to Call the Cops, But Police Confirm They Are Investigating Topless Photo Incident 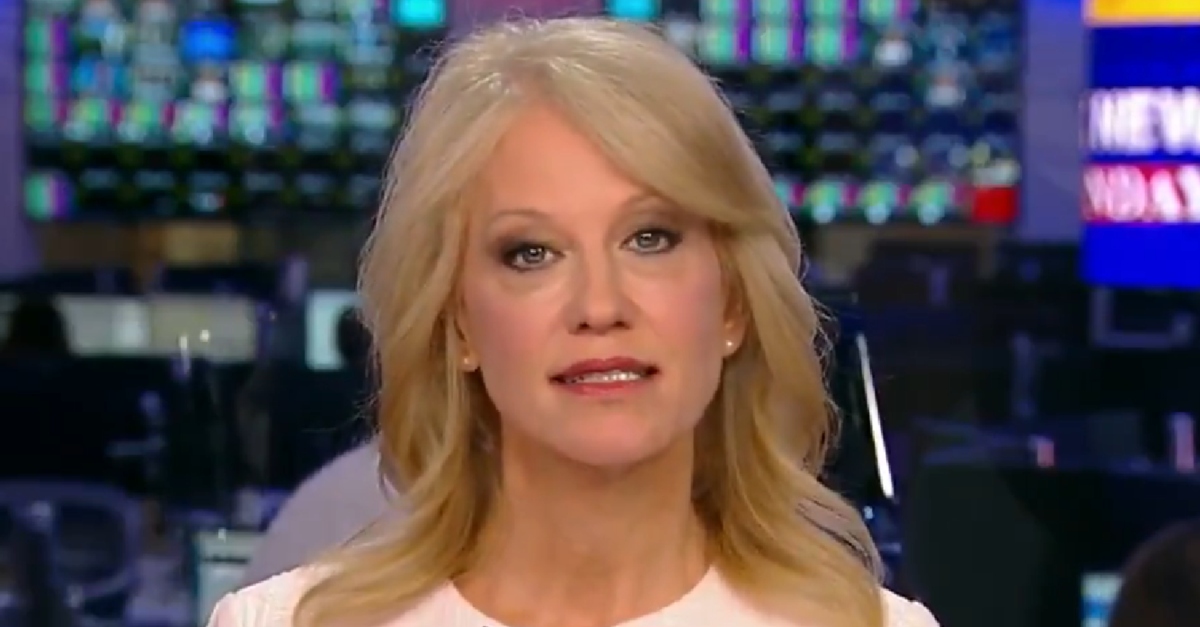 Twitter users screen-captured a “fleet” posted from Kellyanne Conway’s account (@KellyannePolls) showing the teenage girl topless. Later, Claudia Conway posted a series of videos on TikTok, saying that the picture had, indeed, been her, and saying she assumed it had been posted by her mother.

The reaction videos have since been deleted from Claudia’s account, but they were captured by some users and can be viewed below.

Claudia Conway after finding out from her TikTok followers that this photo was circulating on Twitter, part one: pic.twitter.com/2UqaySrxT7

Here’s a link to the second of two videos in which Claudia Conway finds out from her TikTok followers about her topless photo having been posted on Twitter:https://t.co/E21ilsWMtH

“I’m assuming my mom took a picture of it to use against me one day and then somebody hacked her or something,” Claudia says in the video. “I’m literally at a loss for words. If you see it, report it.”

In one video, Claudia said that “nobody would ever have any photo like that, ever. So, Kellyanne, you’re going to fucking jail.”

The teen also posted a series of messages in Morse Code encouraging followers to report abuse.

Conway family strife is nothing new. Kellyanne Conway is married to vocal never-Trumper lawyer George Conway. During the Trump presidency, the Conways’ daughter posted many times, criticizing both her parents’ politics and parenting.

On Tuesday, George Conway tweeted a new video from Claudia where his daughter said she was “leaving social media for a bit” to work on her relationship with her mother. He said that Claudia asked him to tweet the statement.

“[P]lease stop sending hate to my family. please. i am putting an end to all of this. i’m okay. we are okay,” said a message from the teen accompanying the video.

Claudia said she was sick of the family name making headlines and said people should not call the authorities nor send threats to the family. She also said she was not “forced” to say what she did in the video.

With reference to the photo, she also flip-flopped to assert her mother “would never put something like that on the internet.” She also said “I love my mom and she loves me.”

Our daughter Claudia asked me to tweet this statement for her. https://t.co/ilH7IFqERB

But the Alpine Police Department confirmed to Law&Crime on Tuesday that they are conducting an investigation into this matter. Alpine Police Chief Christopher Belcolle said authorities cannot release additional information because juvenile records are exempt from disclosure under N.J.S.A. 2A:4A-60.

In Aug. 2020, Claudia announced via Twitter that she was planning to seek emancipation from her parents.

i’m officially pushing for emancipation. buckle up because this is probably going to be public one way or another, unfortunately. welcome to my life

Shortly thereafter, George Conway said he was stepping away from his work at the Lincoln Project to “devote more time to family matters.” Kellyanne simultaneously left her position at the White House.

In recent weeks, Claudia has posted several videos appearing to show Kellyanne shouting and cursing at her; Claudia also shared several messages saying that she has been abused by her mother for years.

At this point, information about how the topless photo came to be posted on Kellyanne Conway’s account is unknown. However, in New Jersey (where the Conways reside), there are both civil and criminal consequences for a parent posting a nude photo of a minor.

Furthermore, most states prosecute criminal child endangerment. Under New Jersey law, a parent is guilty of endangerment if that parent “knowingly distributes an item depicting the sexual exploitation or abuse of a child.” Whether posting a topless photo amounts to “sexual exploitation” would depend on the circumstances of the photo’s origin as well as those of its distribution.

If a parent were to post a nude photo of their own child online, there would be additional civil consequences, including those related to parental rights. Under New Jersey law, “child abuse” is defined as “the physical, sexual or emotional harm or risk of harm to a child under the age of 18 caused by a parent or other person who acts as a caregiver for the child.” Parents accused of child abuse or neglect are typically prosecuted for wrongdoing in family court, as a matter separate from the imposition of any criminal case. Penalties for a parent found liable range from emancipation to loss of custody to protective orders, mandatory parenting classes, and family counseling.

Under New Jersey law, child pornography laws apply to those under the age of 18.

Anyone seeking to make a report about child abuse or maltreatment should consult their local state central registry to do so. More information about reporting and preventing child abuse can be found at www.childhelp.org.