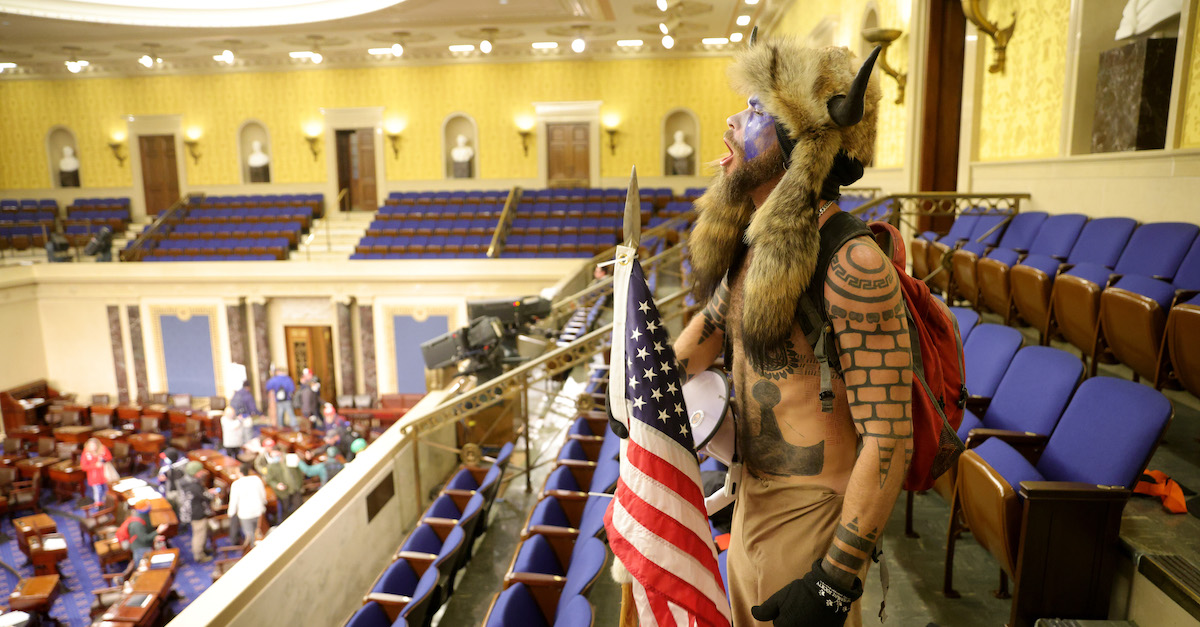 Federal prosecutors late Wednesday asked to delay court proceedings in the case of so-called “QAnon Shaman” Jacob Chansley. In a nine-page motion, the government argues that the sheer volume of evidence in the cases against Chansley and others requires further time to process. The government showed an additional card surrounding where its investigation into the Jan. 6 events at the Capitol Complex cases was headed.

The motion, styled legally as a “motion to continue and to exclude time under the Speedy Trial Act,” seeks a “60-day continuance” of the case and to otherwise push back future proceedings “on the basis that the ends of justice served by taking such actions outlay the best interest of the public and the defendant in a speedy trial.”

“The investigation and prosecution of the Capitol Attack will likely be one of the largest in American history, both in terms of the number of defendants prosecuted and the nature and volume of the evidence,” prosecutors wrote. “Over 300 individuals have been charged in connection with the Capitol Attack. The investigation continues and the government expects that at least one hundred additional individuals will be charged. While most of the cases have been brought against individual defendants, the government is also investigating conspiratorial activity that occurred prior to and on January 6, 2021.”

The document goes on to state that over 900 search warrants have been executed and that at least fourteen law enforcement agencies are involved with the continuing investigation. Evidence thus far includes more than 15,000 hours of surveillance and body camera video; 1,600 electronic devices; “hundreds” of searches of “electronic communication providers;” more than 210,000 tips (“a substantial portion include video, photo and social media”); 80,000 reports; and 93,000 attachments.

The material needs to be reviewed and handed over to defense attorneys. Prosecutors said they were working with the Office of the Federal Public Defender to triage and to turn over the relevant material pursuant to their constitutional discovery duties. Cases involving defendants who remain locked up pending trial will be given priority in this process, they said.

When a defendant pleads not guilty, subsection (c)(1) of the Speedy Trial Act requires prosecutors to commence a trial “within seventy days” after filing an information or indictment. However, subsection (h)(7)(A) of the Act allows a judge to grant a delay if “the ends of justice” would be “served by taking such action” and therefore “outweigh the best interest of the public and the defendant in a speedy trial.” Subsection (h)(7)(B) lays out several factors which would suggest a trial should be delayed. Among them are the following rather common-sense rationales:

(ii) Whether the case is so unusual or so complex, due to the number of defendants, the nature of the prosecution, or the existence of novel questions of fact or law, that it is unreasonable to expect adequate preparation for pretrial proceedings or for the trial itself within the time limits established by this section.

(iv) Whether the failure to grant such a continuance in a case which, taken as a whole, is not so unusual or so complex as to fall within clause (ii), would deny the defendant reasonable time to obtain counsel, would unreasonably deny the defendant or the Government continuity of counsel, or would deny counsel for the defendant or the attorney for the Government the reasonable time necessary for effective preparation, taking into account the exercise of due diligence.

Prosecutors then sealed their argument in favor of a delay:

As described above, the Capitol Attack is likely the most complex investigation ever prosecuted by the Department of Justice. Developing a system for storing and searching, producing and/or making available voluminous materials accumulated across hundreds of investigations, and ensuring that such system will be workable for both the government and defense, will take time. Even after a system generally agreeable to the government and the Federal Public Defender is designed and implemented, likely through the use of outside vendors, it will take time to load, process, search and review discovery materials. Further adding to production and review times, certain sensitive materials may require redaction or restrictions on dissemination, and other materials may need to be filtered for potentially privileged information before they can be reviewed by the prosecution.

On Friday, Chansley’s defense attorney, Al Watkins, submitted a two-page response to the government’s motion.  Watkins said he would not oppose the government’s request to delay the proceedings but wished to “specifically note[]” that Chansley “does not waive his right to a Speedy Trial under the Speedy Trial Act.”

Read the full arguments below:

[Editor’s note: this piece has been updated to include the responsive filing from Chansley’s attorney.]