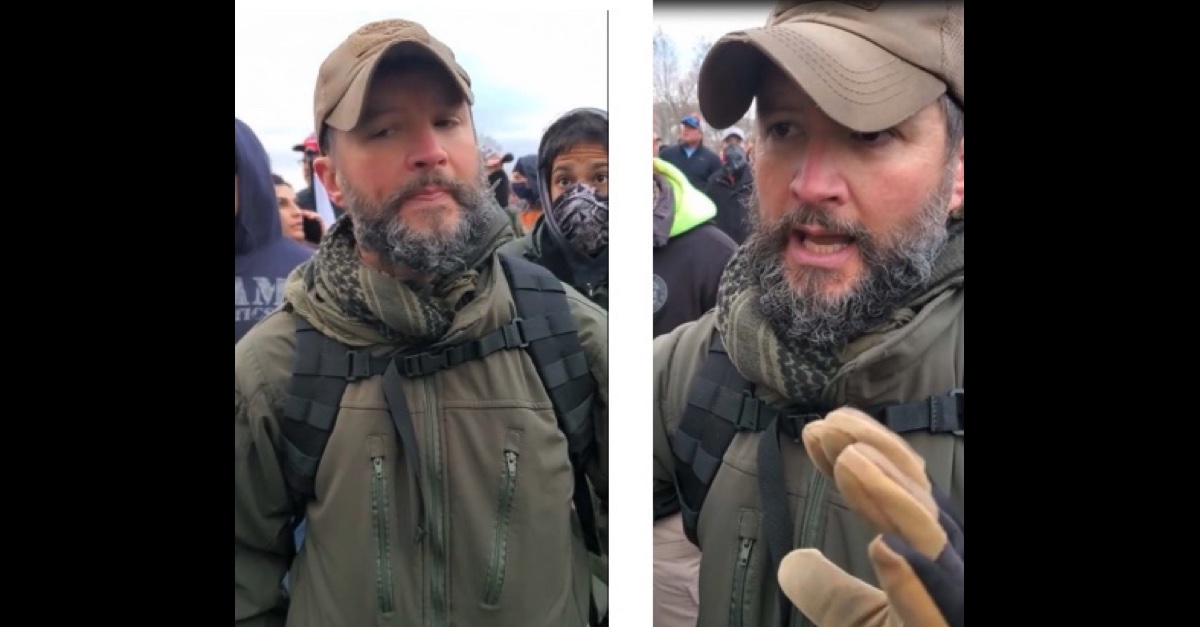 An Alabama man who said he witnessed the shooting death of Ashli Babbitt inside the U.S. Capitol building on Jan. 6 has admitted committing a misdemeanor. Phillip Bromley, of Sterrett, pleaded guilty Wednesday to disorderly and disruptive conduct in a restricted building or grounds with intent to impede and disrupt the orderly conduct of government business. He could face up to one year in prison, U.S. District Judge Paul Friedman said at the plea agreement hearing.

Prosecutors first identified Bromley, a nurse anesthetist, through ProPublica’s expansive and comprehensive collection of Jan. 6 videos, “What Parler Saw During the Attack on the Capitol.”

In the requisite video, Bromley says that he was just eight feet away from Babbitt, who was fatally shot while apparently trying to climb through a window into a hallway being guarded by law enforcement officers.

The FBI affidavit specifically identifies a video that started at 4:26 p.m. Bromley recounted his story for Oklahoma pastor Ren Schuffman. According to the affidavit:

In his narrative of events on Video 1, BROMLEY states: “listen . . . everybody needs to know the truth.” BROMLEY proceeds to describe how he “breached the right side,” “went in,” and “came to two large glass doors.” When he reached the doors, BROMLEY continues by stating he was talking with SWAT officers and reminding them “of their oath,” at which time “a gunshot went off” and a woman was “shot her in the neck.” BROMLEY continues by stating it “did not look like a survivable wound” and that “she [the woman who was shot] was eight feet in front of me on a line.” BROMLEY further describes the clothing he observed the woman to be wearing when she was shot and states “they shot her and she is dead.”

BROMLEY concludes his narrative by stating: “my name is PHILLIP BROMLEY.”

Although Bromley’s own words placed him at the scene of Babbitt’s death — and, therefore, unlawfully inside the Capitol building on Jan. 6 — investigators viewed two additional videos confirming Bromley’s location. A YouTube video showing police treating Babbitt after she was shot also shows Bromley in the surrounding crowd, and a third video shows Bromley inside the Capitol building.

The woman who Bromley witnessed being shot was Babbitt, 35, a 14-year veteran of the U.S. Air Force. She was a staunch supporter of Donald Trump, and her social media history suggests she was a follower of QAnon who often retweeted conspiracy theories posted by Georgia attorney L. Lin Wood. The last thing Babbitt ever tweeted was originally from Wood, a “MUST BE DONE LIST” that indicated that then-Vice President Mike Pence needed to be charged with a crime punishable by death and that U.S. Supreme Court Chief Justice John Roberts needed to resign.

Bromley was 47 years old at the time of his arrest, according to a local report.

Friedman, aware perhaps of the pending appeal of high-profile Jan. 6 defendant Jacob “QAnon shaman” Chansley and his apparent plans to claim ineffective assistance of counsel, asked Bromley directly if he was satisfied with his legal representation.

You can read the affidavit attached to the complaint against Bromley below.

[Images of the defendant via the FBI.]