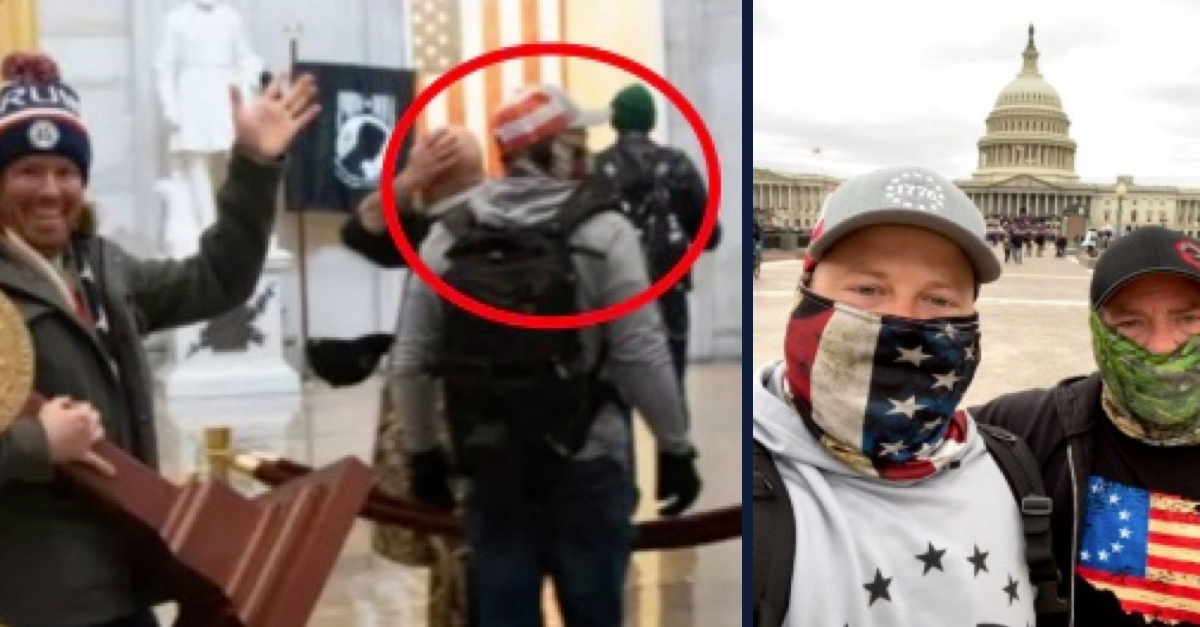 A Washington state man who was linked to the Proud Boys group during the Jan. 6 attack on the U.S. Capitol and who was just steps away from violent confrontations between rioters and police will spend three weeks in jail.

Jeremy Grace, 38, was sentenced before U.S. District Judge Randolph Moss on Friday. He had previously pleaded guilty to one count of entering and remaining in a restricted building or grounds, a misdemeanor punishable by up to one year in jail and a fine of up to $100,000.

Grace admitted that on Jan. 4, and and his father, Jeffrey Grace — whose Jan. 6 criminal case is still pending — traveled together from their respective homes in Battle Ground, Washington, to Washington, D.C., ostensibly to attend a rally in support of Donald Trump.

On the evening of Jan. 5, prosecutors say Grace and his father went to a gathering in D.C. of Proud Boys members from around the country. They allegedly linked up with the Proud Boys again the next day at around 10:00 a.m. and started walking with the group toward the U.S. Capitol building.

According to prosecutors, neither Grace nor his father actually attended Trump’s rally. Instead, prosecutors say, Grace followed the Proud Boys as they approached the Capitol and remained mere steps behind as the group allegedly instigated violence. The Graces eventually both went into the building itself, entering through the Senate Wing Door that had been breached moments earlier, the authorities have alleged.

Once inside, court documents revealed that Grace used his cell phone to take pictures and videos of himself and his father, including a video in which both men were chanting “Our house!”

In another video, Grace can be heard saying “Freedom,” with his father allegedly replying: “God bless America.”

Grace and his father were also allegedly seen in the background of one of the most indelible images from the attack: a grinning Adam Johnson, who was ultimately sentenced to more than two months behind bars, carrying the lectern of House Speaker Nancy Pelosi (D-Calif.) through the Rotunda.

While prosecutor Mona Sedky acknowledged that Grace was not accused of any acts of physical violence in connection with the attack, she argued that his proximity to the Proud Boys indicated that he was more than just a passive observer.

“He is feet away from the very first group that is confronting the line of U.S. Capitol Police,” Sedky argued at Friday’s sentencing hearing.

“He willingly joined that fray and he steadfastly remained a part of it,” Sedky also said.

The prosecutor took particular issue with the fact that Grace helped his father set up a business that sells Jan. 6 related merchandise, including paraphernalia emblazoned with slogans such as “Our House” and “Back the Blue.”

“The notion that a Jan. 6 rioter would try to claim allegiance to the police, having disrespected the police on Jan. 6, to me is very troubling,” Sedky said Friday. “It shows a complete lack of appreciation for what his conduct was and what it did.”

The prosecutor also emphasized the seriousness of Grace’s actions after Jan. 6, in which, according to the government, Grace lied to federal investigators — twice.

During a phone interview with the FBI in on Jan. 25, 2021, Grace told an agent that he had been separated from his father and that he did not enter the building, according to the government’s sentencing memorandum. Months later, in May, investigators conducted an in-person interview with Grace and showed him a picture that they said depicted him and his father walking toward the Capitol, Grace denied that it was him and said he did not recognize the man who was actually his father.

Grace had also deleted pictures and videos of himself and his father at the Capitol from his phone, the authorities said.

“Mr. Grace was not happy with what he had done,” C. Renee Manes, Grace’s attorney, told Moss. “I think that’s [behind his] deletion of photos and statements to the FBI. This was not something Mr. Grace was proud of.”

“It sounds like he was trying to avoid getting in trouble,” Moss responded.

Manes likened Grace’s behavior to that of her other criminal defense clients and said it’s not unusual for defendants to have initially denied being in possession of contraband.

“They deny taking responsibility until they do take responsibility,” she said, adding that Grace hadn’t ever received advice to call a lawyer if he was ever confronted by law enforcement.

Manes had also tried to minimize her client’s chants of ‘Our house’ while inside the Capitol, saying that such phrases have taken on a different meaning in the 18 months since the attack than perhaps they had at the time.

“It wasn’t just an empty phrase or a description of democracy,” Moss said. “It was a political statement that those who are unhappy with the election results are going to take the Capitol.”

When Moss asked the defendant if he had anything to say on his own behalf, Grace kept his comments brief.

“I take responsibility for my actions that day,” Grace said. “And, um, yeah, I never meant this to hurt my family or business, and, uh, yeah, I don’t have a lot to say right now Your Honor.”

When it came time to issue his sentence, Moss said that while Grace sounded like a devoted father and a good employee, some of his actions in and around Jan. 6 were troubling.

“The fact that Mr. Grace was involved in chanting ‘Our house’ is, I think, evidence that his purpose in being there was to take control of the Capitol,” Moss said. “To give it back to the people — and by people, I don’t mean people of the United States, I mean people who were the rioters that day.”

Moss didn’t quite believe that Grace had fully taken responsibility for his actions; the judge said he was “not at all convinced” that Grace was remorseful for anything other than being subject to criminal proceedings.

“I have not really seen evidence from him that he really regrets what happened to our country that day during those events,” Moss said.

Moss said he was also “struck by the fact that he lied to the FBI not once but twice.”

In the end, Moss sentenced Grace to 21 days in jail and one year of supervised release. Moss also ordered Grace to perform 60 hours of community service within 12 months.

Pursuant to the plea agreement, Grace will pay $500 in restitution toward the estimated $2.7 million in damage to the Capitol.

A plea agreement and statement of the offense in this case are both available online.