Utah Piano Teacher Who ‘Cheered and Applauded When the Rioters Broke Through’ on Jan. 6 Sentenced More Harshly Than Former Cop Stepson-in-Law 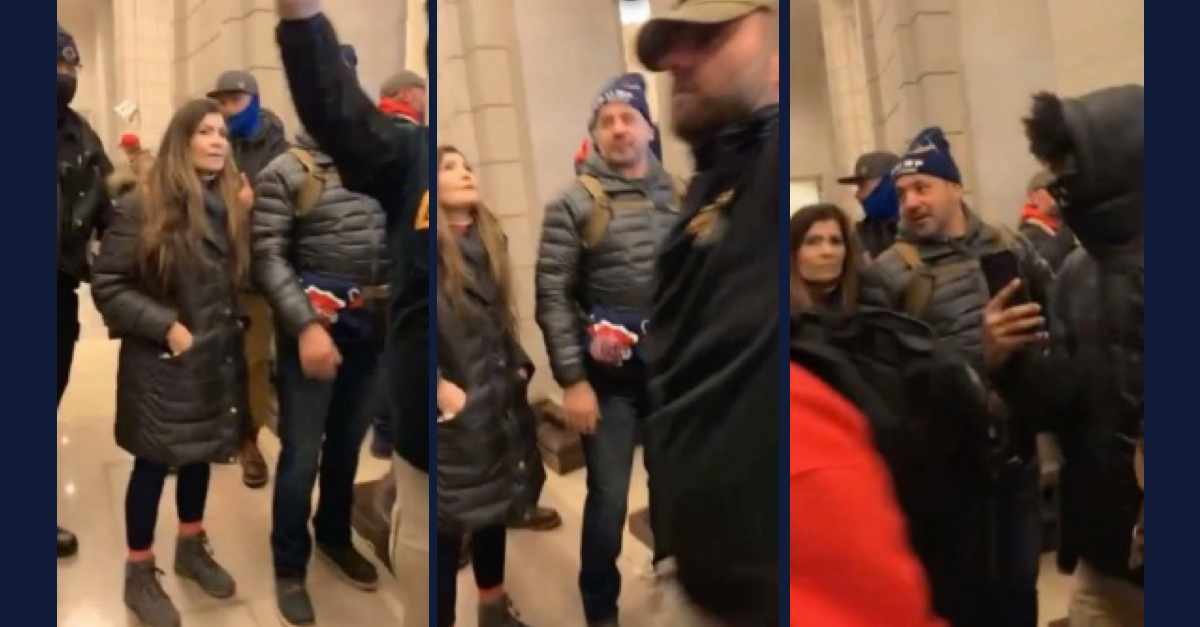 A piano teacher from Utah who took part in the Jan. 6, 2021 attack on the U.S. Capitol Complex was sentenced to 30 days behind bars on Wednesday afternoon.

Janet Buhler, 56, pleaded guilty in January to one count of parading, demonstrating, or picketing in a Capitol building. That charge is a misdemeanor that carries a potential six-month jail sentence. As a result of her plea, the government agreed to drop four additional charges related to her participation in the pro-Donald Trump riot.

During the sentencing hearing, Assistant U.S. Attorney Hava Mirell sought to cast the defendant as a key player in the attack, which temporarily forced Congress to stop certifying President Joe Biden‘s 2020 electoral win.

The prosecutor described blaring alarms, pane after pane of broken glass from smashed windows and doors, and a cacophony of violent shouts and threats inside the building’s national seat of legislative government.

“1776!” a chorus-line of the mob shouted, Mirell said, as the rioters attempted to move forward. “Our house! Push!”

The prosecutor then noted that some of those shouting were explicitly violent and directed their ire toward police officers attempting to hold the line and repel the pro-Trump crowd that day.

“You’re life isn’t worth it!” they said to the officers. “You’re going to die.”

Mirell conceded that she couldn’t say for sure whether Buhler heard any of the direct threats against law enforcement but that the overall “flavor” of the scene inside that day would have been obvious.

And the defendant, the prosecutor said, “took one extra step” in interrupting the business of government and “violating our norms” by going into the U.S. Senate chamber, even though most of the rioters in the building stayed in predominantly public areas.

Mirell added that “with every step she took” through hallways past locked doors and offices, Buhler “should have” known or “would have” known that she was not allowed to be there.

Defense attorney Brett Tolman spent the majority of his time delivering an impassioned plea about the kind of person his client is–compared to most of the criminal defendants he’s represented in the past.

“Janet Buhler is very different,” the defense attorney said, casting her as a singular example in his 25 years of defense work.

“For a considerable number of months and years, she has worked to better those around her,” Tolman went on, saying Buhler has used her “sewing expertise” to help the homeless and her “music expertise” to help children navigate their future elite piano-playing careers.

Buhler had gone to the U.S. Capitol Complex—and before that, the pro-Trump “Stop the Steal” rally premised on false claims of electoral fraud during the 2020 presidential election—with her stepson-in-law, former Salt Lake City police detective Michael Lee Hardin, 50. He pleaded guilty to the same parading and picketing misdemeanor as Buhler and was ultimately sentenced to a $500 fine and 18 months probation.

“I’m asking for the punishment to be less than Mr. Hardin because Janet is more deserving,” Tolman said.

The defense attorney cited to a placard in the U.S. Department of Justice main headquarters which, he said, discusses “the consistent application of the law” as the hallmark of justice itself.

U.S. District Judge Colleen Kollar-Kotelly rejected the implication that she was bound by the sentence a different judge gave to Hardin.

During a conversation about what she described as “parity,” the judge said she referred to numerous other such cases, including some of her own, when determining Buhler’s 30-day sentence.

“This is a serious offense,” Kollar-Kotelly said, adding that the defendant watched the rioters crush law enforcement officers.

“It certainly was noisy, it wasn’t a quiet demonstration,” the judge added.

“Buhler cheered and applauded when the rioters broke through the east rotunda doors,” the judge said, finding the defendant was not just a passive participant in the ultimately fatal mêlée. “This certainly would have encouraged and egged on the rioters.”

Kollar-Kotelly took stock of various competing points about the defendant that factored into the determination of her sentencing.

“She was in the Capitol for the 28 minutes,” the judge said. “And she went in shortly after it was breached.”

Kollar-Kotelly noted that Buhler admittedly took photos inside the Capitol and then deleted them because “they were not flattering photos of herself, but she still destroyed evidence.”

“She did self-surrender,” the judge noted. “She did plead guilty.”

But, the court said, there was some equivocation at the plea hearing which almost led to the plea being rejected.

As Law&Crime previously reported, there was a slight dust-up over whether Buhler did not believe there were barriers barring entry to the Capitol that day or whether she had simply not seen those barriers. After a bit of discussion, however, the judge did ultimately accept Buhler’s plea.

Still, before Buhler’s allocution today, Kollar-Kotelly said, it wasn’t clear to the court that the defendant understood the impact her actions inside the Capitol had made on the country writ large.

“I am more optimistic after her statement today that she has some understanding what it means,” the judge said.

Buhler’s statement was lengthy and contrite.

“I would like to say that I am truly sorry that you are all here today,” she began when addressing the court. “Not only do I regret going into the U.S. Capitol on Jan. 6, but I should not have gone on that trip to Washington, D.C. at all…I should have made my own decisions and trusted my own instincts but instead I walked with the horde.”

“My intentions were never malicious or destructive,” she continued. “If I could do it all over again, I would have insisted on doing what I had planned that day, which did not involve going into the Capitol.”

Buhler went on to say that going into the Capitol was “one of the worst” decisions she had ever made and that it had particularly upset her family and friends–chief among them her husband and children.

“I am shameful to say this has become a defining moment in my life and this is not what I want to be defined for,” she added. “I have a such a sense of remorse and guilt and disappointment. I would undo that day if I could. I feel shame, remorse, guilt, and disappointment.”

Buhler insisted she did not want “pity” but said she deserved “to be punished for [her] crime.”

“This has been pure hell,” she concluded.

The judge described Buhler, based on uncontested facts and testimonials, as a something of a pillar of her community. The defendant, she said, is a woman who lived “a life otherwise marked by grace and kindness.”

The judge said she wanted her sentence to send a message–reminding Buhler that she didn’t live in an authoritarian dictatorship.

“You live in a country with incomparable freedoms that are protected by the rule of law,” Kollar-Kotelly added.

In addition to the 30-day jail sentence, Buhler was given 36 months probation and a $10 fine. She must also pay restitution in the amount of $500, which her attorney said she can pay immediately.

Kollar-Kotelly, a Bill Clinton appointee, agreed to set a surrender date that was amenable to the defendant so that she could help her adult son, who is a recovering drug addict, get some of his affairs in order. Buhler is due to turn herself in and begin serving her sentence “not before August 8th,” the judge said.