U.S. Capitol Rioter Who Blamed Violence on ‘Antifa’ But Went on to Testify Before Jan. 6 Committee Gets Probation 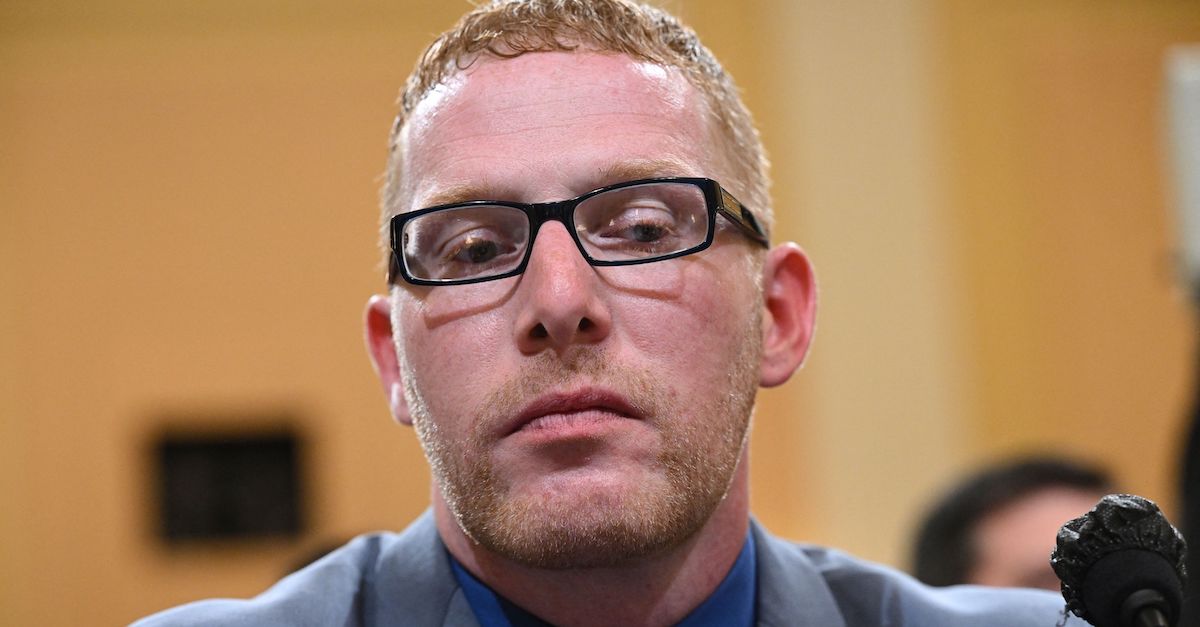 Stephen Ayres, who entered the U.S. Capitol illegally on January 6, 2021, appears before a full committee hearing on “the January 6th Investigation,” on Capitol Hill on July 12, 2022, in Washington, DC. (Photo by SAUL LOEB/POOL/AFP via Getty Images)

A U.S. Capitol rioter who testified before the Jan. 6 Committee that he would not have come to Washington, D.C., had he known former President Donald Trump had no evidence of election fraud received a sentence of two years of probation.

Ohio resident Stephen Ayres, an erstwhile believer in Trump’s false election fraud claims, blamed the violence at the Capitol on Jan. 6 on “antifa.” After Jan. 6, 2021, Ayres declared bluntly in a YouTube video that the “purpose of today was to expose Pence as a traitor” and “the American people are not going to let this slide,” statements that prosecutors said could have incited violence.

Having entered the Capitol through the Senate Wing Doors, Ayres posted photographs of the pro-Trump mob rioting inside the building.

Indicted on five charges — including a felony count of obstructing an official proceeding — Ayres ultimately pleaded guilty to a misdemeanor: disorderly and disruptive conduct in a restricted building or grounds.

Some four days after that plea, Ayres appeared before the Jan. 6 Committee and told lawmakers that election misinformation sent him there.

After the hearing, news outlets reported that Ayres apologized to two of the police officers who responded that day: Capitol Police Officer Aquilino Gonell and Metropolitan Police Officer Daniel Hodges, who were seated behind him.

As cited in the government’s sentencing memo for Ayres, Gonell later spoke to The Hill about the interaction:

“I accepted his apology. I am not a vindictive person. Somehow he still [has] to answer to the judge criminally and also to his Maker. But I think that apology should have been directed first [to] Erin Smith, the widow of Jeffrey Smith from MPD, who was sitting right next to me yesterday, and he did not bother to stop …. The first person he should have apologized [to] was Erin Smith. Her husband lost his life … not because of what [Ayres] did, but because of what he was part of. … Whether [Ayres apologized] as a photo op or just looking for leniency [from] the judge, that’s not for me to decide.” [ellipses as recorded in the memo]

Prosecutors asked for marginal jail time: a term of 60 days imprisonment, along with one year of supervised release, 600 hours of community service and $500 in restitution.

U.S. District Judge John D. Bates, a George W. Bush appointee, ultimately opted against incarceration, but the term of probation is a year longer than prosecutors requested. He also imposed the $500 restitution penalty.

Federal court judges have differed in their power to impose both jail time and probation on certain misdemeanors (see: split sentences).