South Carolina Lawyer Charged with Storming the U.S. Capitol Has Reportedly Been Fired, Pleads Not Guilty in Court 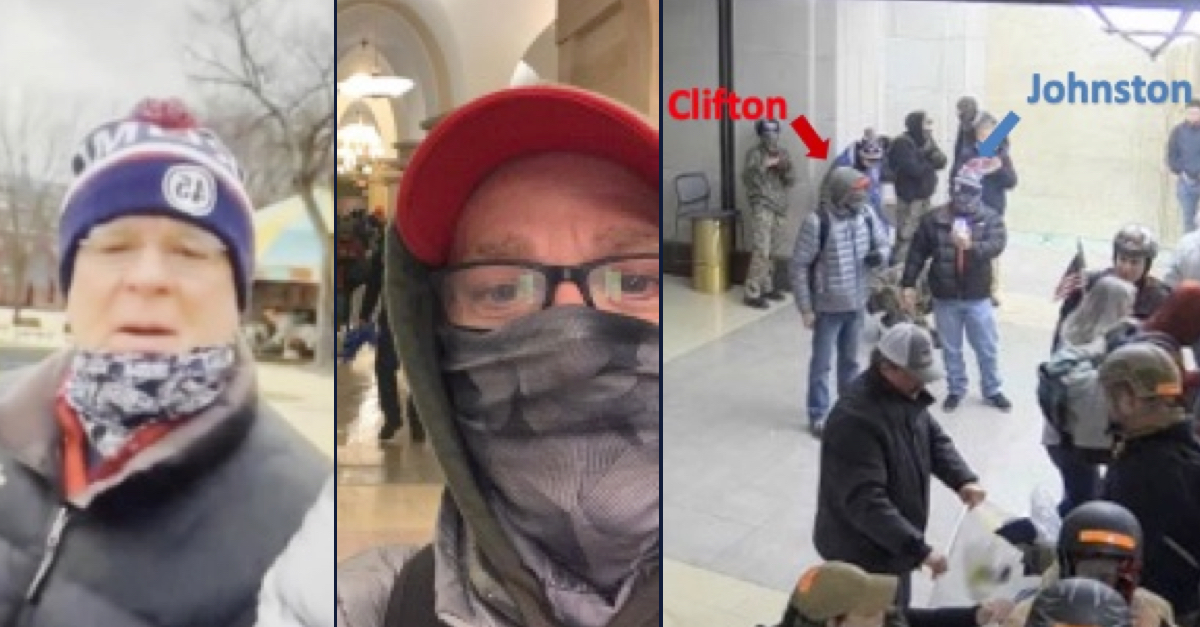 David Johnston (left) and Chad Clifton in pictures taken at the Capitol on Jan. 6; surveillance footage showing Johnston and Clifton near the Capitol Crypt (images via FBI court filing).

A South Carolina lawyer who is charged with breaching the U.S. Capitol on Jan. 6 has reportedly been fired from his law firm.

David Charles Johnston, 69, and Chadwick Gordon Clifton, 47, were arraigned Friday before U.S. District Judge Beryl Howell. They both pleaded not guilty to four misdemeanors relating to trespassing on Capitol grounds and disorderly conduct.

Until his arrest earlier this week, Johnston had been an attorney at the personal injury law firm of George Sink, P.A., but that is apparently no longer the case.

“George Sink, P.A., injury lawyers, fired me before I was out of the courthouse,” Johnston said following his initial court appearance Tuesday through his attorney Randy Hough, according to a report in The State.

“I have voluntarily consented to the Office of Disciplinary Counsel (the lawyers’ disciplinary group, an arm of the S.C. Supreme Court) placing my law license on suspended status because I do not think it is fair for the Bar to be presented with the difficulty of dealing with this politically charged matter,” Johnston also reportedly said in the statement.

According to the South Carolina Bar, Johnston’s license is listed as being under an “interim suspension,” and he is currently in “not good standing” with the bar. Johnston has reportedly said that he intends to fight the charges against him.

The American Bar Association Journal reported that according to a biography on the George Sink website, Johnston, a married father of four, represented people injured in motorcycle crashes. His biography appears to have been removed from the firm website.

Johnston and his neighbor Chadwick Gordon Clifton are accused of breaching the building after having travelled together from South Carolina to Washington, D.C., to attend Donald Trump‘s so-called “Stop the Steal” rally, in which Trump and others repeated widely-disputed claims of voter fraud in the 2020 presidential election.

An unnamed witness, identified only as Witness #5, tipped the FBI off to video reportedly from Clifton’s TikTok account placing him and Johnston inside the Capitol. 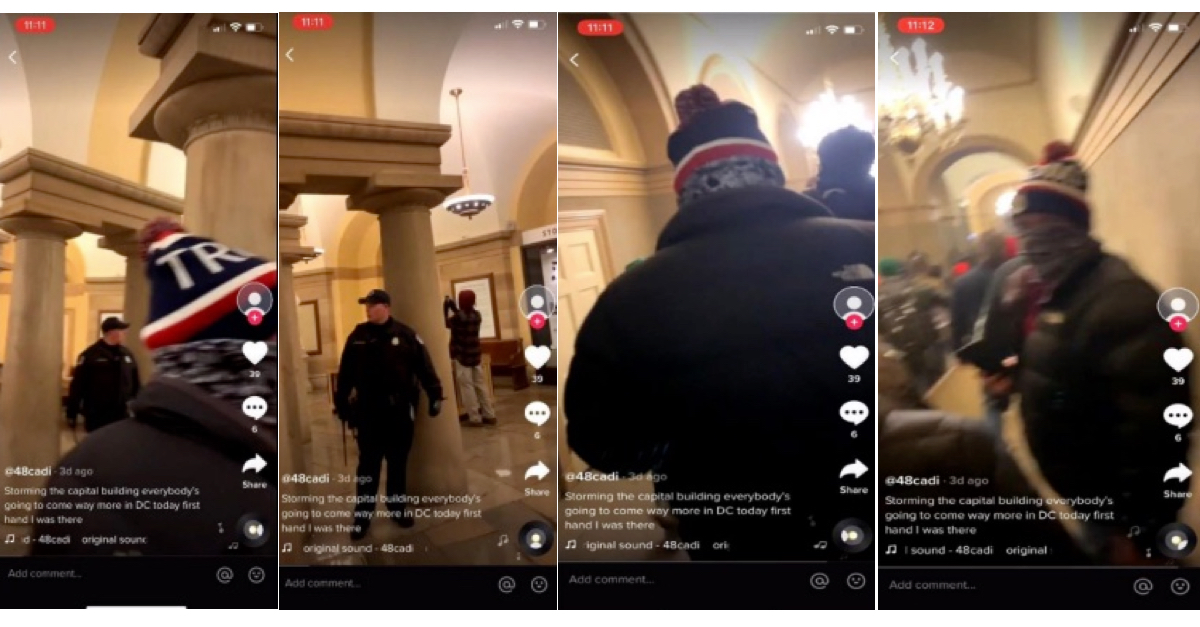 Screengrabs from a TikTok video provided by that same witness appear to show the men inside the building. 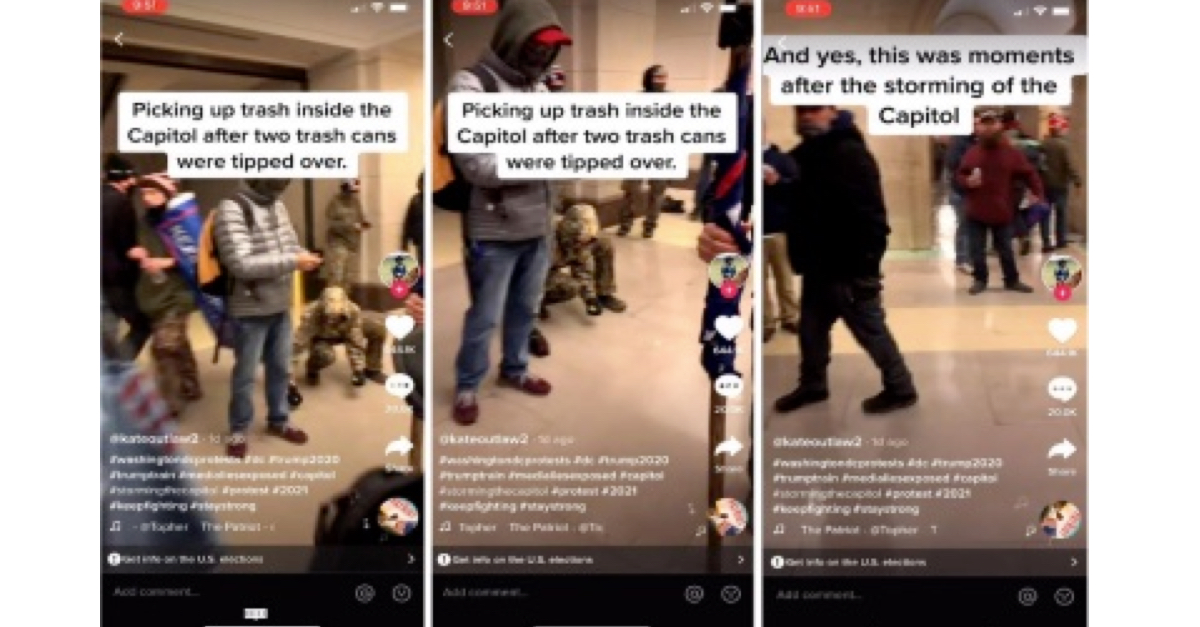 “Picking up trash inside the Capitol after two trash cans were tipped over,” one caption reads.

“And yes, this was moments after the storming of the Capitol,” another caption says.

Clifton’s comments on social media after Jan. 6 appears to show that he took pride in participating in the siege at the Capitol.

“I’m [on the way] home now,” Clifton allegedly wrote in a conversation with Facebook user Andy Balao on Facebook on Jan. 7. “We are good and no harm. Awesome day!”

On Jan. 9, in a message to a Facebook user named Jewel Clifton, he wrote: “I’m telling you right now don’t say anything out loud that you don’t want somebody else to hear[.] We are in a war and 95% of the people don’t even know it[.]”

Clifton had glowing words for his time in Washington and his alleged participation in a riot that brought Congress to a temporary halt and forced lawmakers to either evacuate the building or shelter in place, many of them fearing for their lives.

“When I went to DC that was an experience of a lifetime,” Clifton wrote. “I’m sorry that I went inside a broken door where we could have potential he [sic] got in trouble but I was a patriot and I made sure that people didn’t destroy things and picked up trash and we respectful [sic]. The medium [sic] made it look like we were a bunch of demons destroying things in which we were not in anyway.”

According to prosecutors, Clifton was an employee of Maintain, Inc., a property maintenance company located in Mount Pleasant, South Carolina, at the time of the Capitol attack. At least two of the FBI tipsters also worked at Maintain, according to court filings, and told investigators that Clifton “did not work at any jobsites” on Jan. 6.

Representatives for Johnston, the George Sink law firm, and Maintain, Inc. did not immediately respond to Law&Crime’s request for comment.

Howell, a Barack Obama appointee, set the case for a status conference on July 22.

Read the Statement of Facts attached to the complaint against Clifton and Johnston, below.