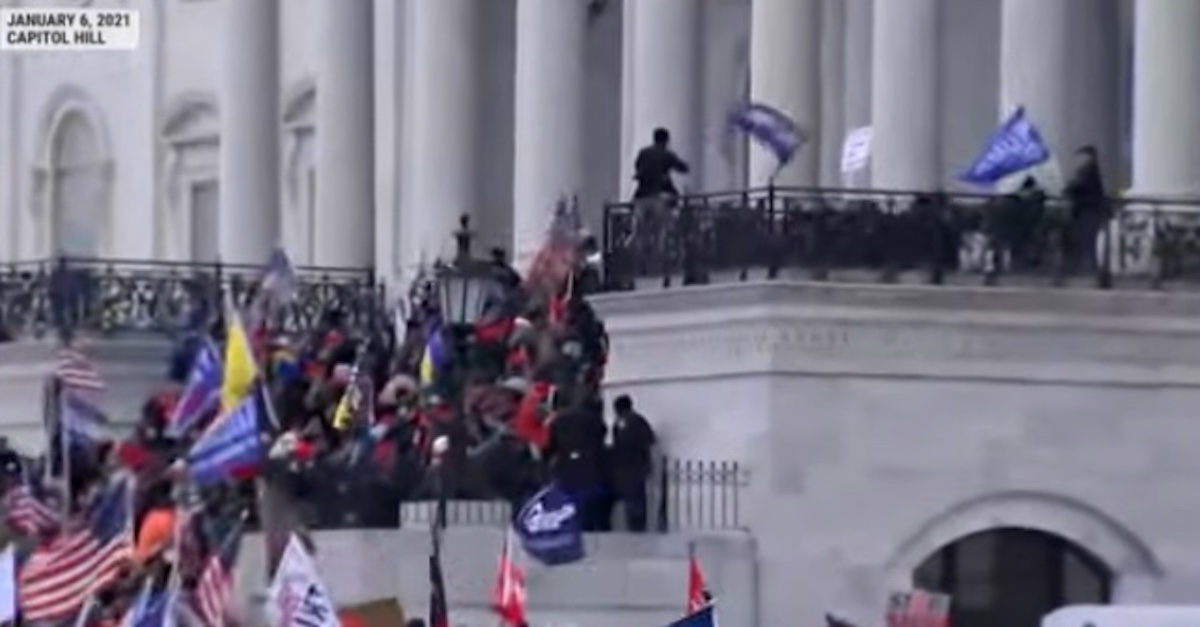 A California man who has proclaimed to be a member of the Proud Boys extremist group has pleaded guilty to assaulting police officers during the Jan. 6 attack on the U.S. Capitol.

Ricky Willden, 40, admitted Thursday that while facing off against Capitol police, he unloaded a canister of chemical spray on the officers, and then threw the can at them when he was done.

“In publicly available videos recorded on Jan. 6, Willden can be seen in a crowd near the east door of the Capitol at 2:24 p.m. (according to time stamps in one of the videos) wearing a dark jacket, beanie cap and gloves, and cheering as the doors to the Capitol opened,” a Justice Department statement said. “At 2:35 p.m., he can be seen raising his hand and spraying an unknown substance from a green can toward police officers who were standing guard at the east door.”

Less than an hour later, surveillance footage shows Willden entering the Capitol building through doors on the east side. He then entered the Rotunda, and left the building at around 3:20 p.m.

Willden also admitted that later that evening, he posted victoriously on Facebook, saying that he thinks “they got the message,” adding specifically to “the cop who started this […] hope you enjoyed my special prizes.”

The Proud Boys group describes itself as a “pro-Western fraternal organization for men who refuse to apologize for creating the modern world; aka Western Chauvinists.” According to organizations that monitor hate groups, the Proud Boys is a misogynistic, Islamophobic, transphobic and anti-immigration group with a “violent agenda,” whose members and leaders regularly espouse white supremacist and antisemitic talking points.

Enrique Tarrio, the group’s leader, has been arrested and charged with conspiracy charges in connection with the Jan. 6 Capitol attack.

In Thursday’s hearing before U.S. District Judge Rudolph Contreras, a Barack Obama appointee, Willden pleaded guilty to one count of assaulting, resisting, or impeding certain officers engaged in official duties. He faces up to eight years in prison and a fine up to $250,000.

According to an eight-count indictment, Willden faced additional charges, including civil disorder, physical violence on Capitol grounds, and disorderly and disruptive conduct. Those charges are expected to be dismissed when Willden is sentenced.

Before joining the riotous crowd of Donald Trump supporters who overran police and swarmed the building in protest of President Joe Biden‘s 2020 electoral win, Willden was a known presence at rallies and events involving the Proud Boys.

Tagged as #GreenCanMan on Sedition Hunters—an open-source website that has become a clearinghouse for information about participants in the Jan. 6 siege at the Capitol—Willden was seen at a Proud Boys rally in Portland, Oregon, in September of 2020.

He was also recorded in October 2020 wearing a Proud Boys shirt and issuing a homophobic and sexist missive, according to the Sedition Hunters website.

Court records from Madera County in California show that he was arrested in May of 2021 for felony assault.

At the end of the plea agreement hearing Thursday, Willden told Contreras that he preferred to be detained until sentencing. His lawyer Griffin Estes indicated that he would surrender himself immediately after the hearing.

Sentencing is set for Aug. 5.