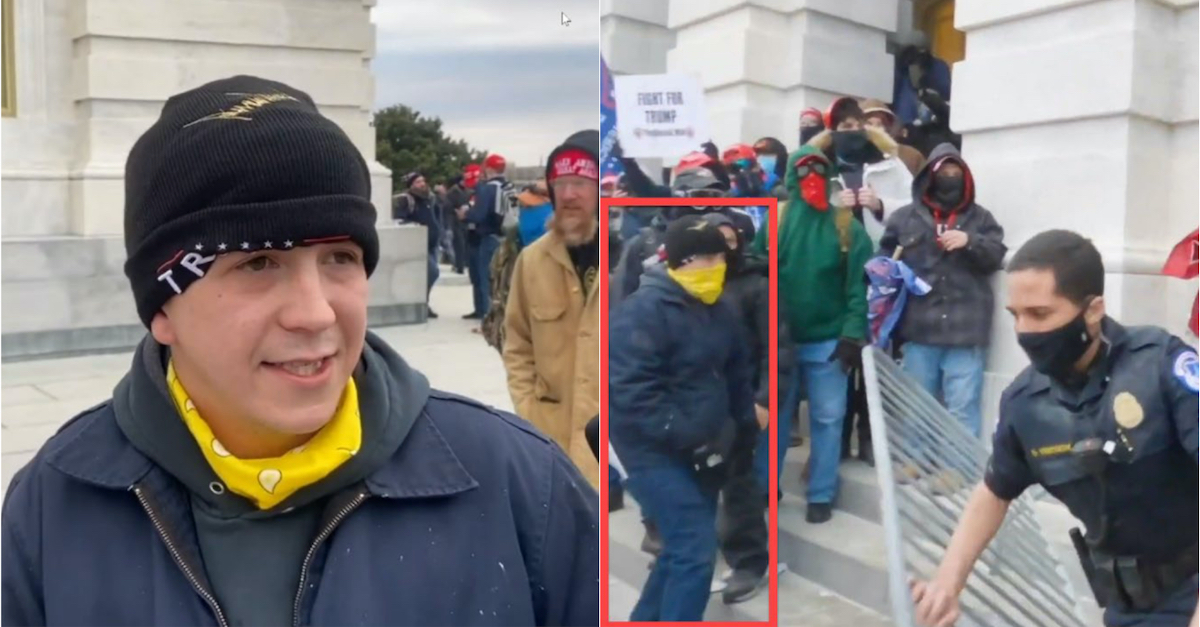 The Pennsylvania man known as “Jack the Tripper” after he was seen on video appearing to use a bike rack to trip a police officer on the steps of the U.S. Capitol building on Jan. 6 has pleaded guilty.

Mikhail Edward Slye, 32, pleaded guilty Tuesday to a felony charge of assaulting, resisting, or impeding a law enforcement officer during the riot at the Capitol, when Donald Trump supporters overwhelmed law enforcement and breached the building. The invasion forced Congress to stop certifying Joe Biden‘s win in the 2020 presidential election.

In his plea before U.S. District Judge James Boasberg, Slye admitted to traveling to Washington on Jan. 6, 2021 to attend the so-called “Stop the Steal” rally for then-President Trump, who encouraged his supporters to march to the Capitol as Congress was certifying the election results. Slye, who prosecutors say occasionally wore a baseball helmet with a metal face mask during this time, went with the crowd to the Capitol grounds.

After exiting the Capitol building for a second time, Slye joined a crowd of protestors at the bottom a flight of stairs as an officer, identified in court documents only as D.T., started to make his way down those stairs, according to prosecutors. D.T. and other law enforcement officers were reportedly going to help another officer who had been surrounded by rioters.

“The defendant grabbed a bicycle rack, held onto it, and waited for the officers to come down the stairs,” the statement of offense, which provides the factual basis for Slye’s guilty plea, says. “As the officers were coming down the stairs, the defendant threw the bike rack into the path of D.T., causing him to trip over the bike rack, fall over it, and fall down the stairs at the same time. D.T. suffered bodily injury, including injuries to his right hand, his shins, and a contusion to his right thumb.”

Slye, according to court documents, then proceeded to verbally taunt police officers as they made their way through the crowd.

As Law&Crime previously reported, Slye was seen in a YouTube video giving an interview about the Jan. 6 attack that same day.

Slye was arrested on Sept. 30, 2022, in Meadville, Pennsylvania. He faces up to eight years in prison under federal law. The plea agreement contemplates a sentence of 51 to 63 months, or from 4.25 to 5.25 years.

Read the statement of offense here.