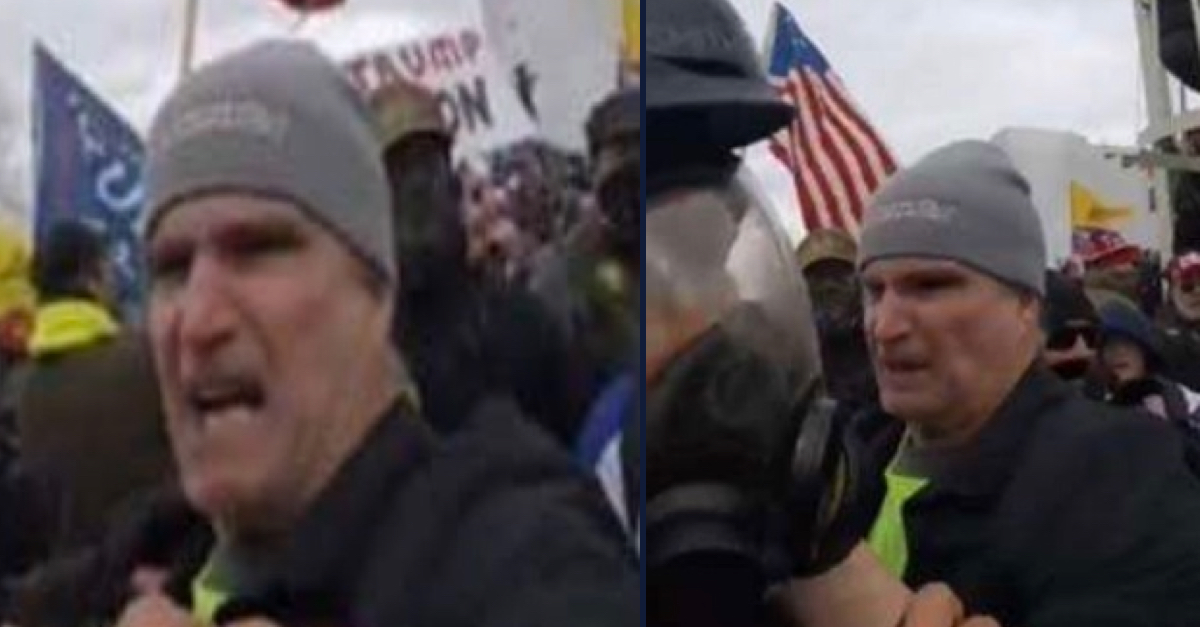 A Pennsylvania man has admitted to hitting a photographer and raising a stun gun and activating it while facing off against police on the grounds of the U.S. Capitol on Jan. 6.

Alan William Byerly, 55, pleaded guilty Monday to one count of assaulting, resisting, or impeding law enforcement officers and one count of striking, beating, or wounding an individual on federal grounds.

In court before U.S. District Judge Christopher Cooper, Byerly admitted to having brought a stun gun with him to attend then-President Donald Trump’s so-called “Stop the Steal” rally and then, later, to the Capitol grounds. He joined the riotous crowd of Trump supporters angry about Joe Biden’s 2020 electoral win, at one point participating in an extended assault on an Associated Press photographer on the scene.

“At about 2:10 p.m., rioters pulled a journalist from the Associated Press – who was carrying a camera and wearing a helmet-style gas mask and a lanyard with Associated Press lettering – down a flight of stairs leading to the western front of the Capitol,” the DOJ said in a press release. “Byerly watched the group that pulled the journalist down the stairs and a subsequent assault. Then, at the bottom of the stairs, he and three other individuals grabbed the journalist and pushed, shoved, and dragged him.”

According to documents, Byerly “grabbed the victim with both hands near the victim’s shoulder and upper chest and pushed the victim backwards.” He then continued to “shove and push the victim away from the stairs, and toward a low stone wall that separated the stairs of the west front of the U.S. Capitol Building from the west lawn below.”

A short time later, the DOJ said, Byerly approach law enforcement that were trying to hold off the crowd with a line of bike racks acting as a barrier.

“Byerly, unprovoked by anything that the officers were doing, approached the officers, raised his right hand that held a stun gun, and activated the weapon,” says the Statement of Offense, which outlines the facts to which Byerly is pleading guilty. “The electrical charge of the stun gun was clearly audible and caused officers … to react. The officers yelled ‘taser! taser! taser!’ seemingly to warn other officers that Byerly was charging and attacking the officers by using a taser.”

Prosecutors were able to determine the type of stun gun Byerly had with him, and described what kind of damage it could cause.

Although police were able to disarm Byerly, he still “continued to charge toward the officers, physically strike, and push against them,” the court document says. “He grabbed an officer’s baton.”

Byerly’s actions against the police caused one officer to lose his footing and fall, the Statement of Offense says.

At the hearing, Byerly acknowledged his culpability in the riot that forced Congress to stop certifying the 2020 election results, forcing lawmakers and staff to evacuate or shelter in place.

“Are you entering this plea of guilty voluntarily and of your own free will because you are guilty, and for no other reason?” Cooper, a Barack Obama appointee, asked Byerly.

“Yes, Your Honor,” the defendant replied.

Byerly faces up to eight years in prison for the assault charge and up to one year behind bars on the charge of striking, beating, or wounding an individual on federal grounds. The remaining charges in the eight-count indictment against him, which include civil disorder and additional assault charges, will be dismissed at sentencing, set for Oct. 21.

Read the Statement of Offense: