‘One Toke Over the Line’: Judge Denies Travel Request of So-Called ‘Capitol Rotunda Doobie Smoker’ Ahead of Sentencing in Jan. 6 Case 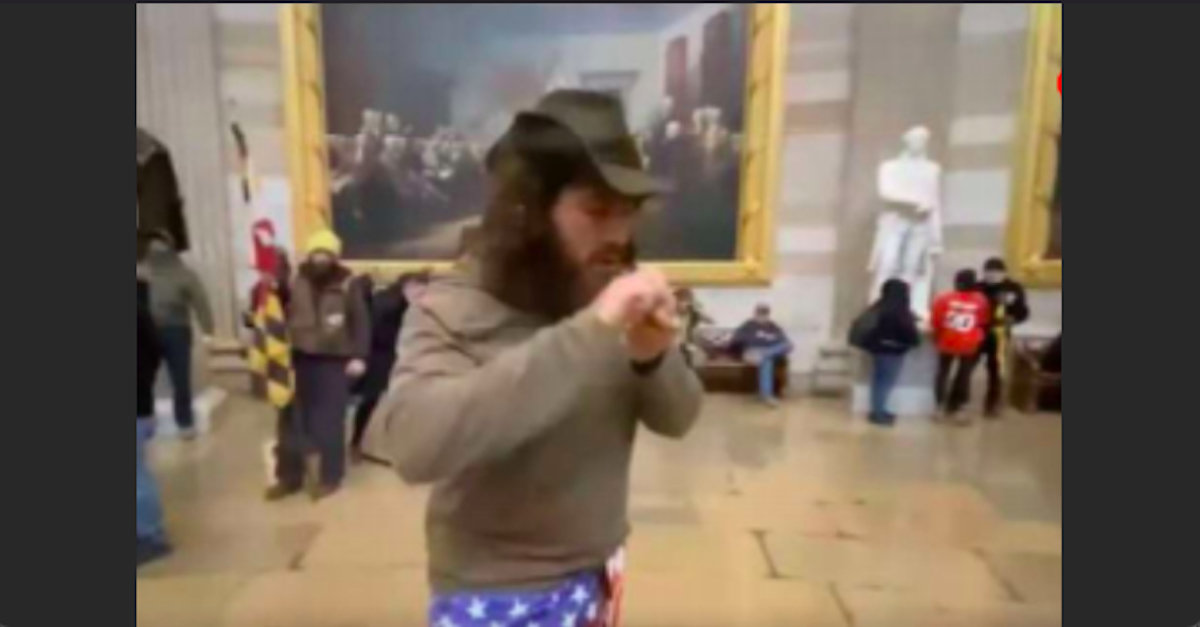 A federal judge on Monday had some fun when denying a travel request that was made by Eduardo Nicolas Alvear Gonzalez, a man dubbed “The Capitol Rotunda Doobie Smoker.” The judge called Gonzalez’s request “one toke over the line” ahead of his sentencing hearing.

Gonzalez was initially arrested on Jan. 31, 2021 and released on High Intensity Supervision in late March. A condition of his release was that he not travel outside of the U.S. In September, Gonzalez reached a deal with prosecutors and pleaded guilty to one count of unlawful parading, demonstrating, or picketing inside of a Capitol building for his role in the Jan. 6 breach.

In his plea agreement, Gonzalez admitted that he “smoked marijuana in the Rotunda and distributed marijuana to other individuals unlawfully inside the Capitol building.” He also posted and appeared in multiple videos that showed him smoking marijuana and drinking beer at the Capitol Rotunda.

According to a criminal complaint filed in U.S. District Court for the District of Columbia, one such video — “The Capitol Rotunda Doobie Smoker Explains Why He Did It” — shows a person filming the Jan. 6 melee with their cell phone who can be heard asking Gonzalez why he is “smoking weed in the Capitol.” Gonzalez responds by simply saying “Freedom.”

Gonzalez’s attorney, Anthony D. Martin, submitted a motion last week seeking to modify the terms of his client’s release before his sentencing hearing, which is currently scheduled for Jan. 5, 2022.

“Mr. Gonzalez has been invited by a friend to spend the Holiday Season, at no cost in London, England,” Martin wrote in the two-page motion. “It is an opportunity that doesn’t present itself very often.”

“Defendant Eduardo Nicolas Alvear Gonzalez has pled guilty to unlawfully parading inside the Capitol building on January 6, 2021. While there, Gonzalez recorded himself smoking marijuana and sharing it with others. He is awaiting sentencing subject to certain conditions of release, including that he not travel internationally,” Judge Cooper wrote in a minute order posted to the online docket for the case. “Gonzalez has filed a motion to modify his release conditions to permit him to accept an invitation from a friend to spend the approaching holiday season in London, England. He offers only that such an opportunity ‘doesn’t present itself very often.’ Appreciating Defendant’s desire to broaden his horizons but finding the request one toke over the line, the court hereby DENIES the motion.”

The order is obviously a nod to the song “One Toke Over the Line” by American folk rock duo Brewer & Shipley, which the band has previously referred to as a “cannabis spiritual.”

Gonzalez faces a maximum sentence of six months behind bars and a fine of not more than $5,000 (a number of defendants who have pleaded guilty to parading have received probation).

While Judge Cooper may have enjoyed rolling some levity into one of the Capitol cases, several law professors said the joke had no place in criminal proceedings.

“If judges want to be cute they should get a stand-up gig,” Georgia State Law professor Anthony Michael Kreis bluntly said on Twitter.

If judges want to be cute they should get a stand-up gig. https://t.co/7ewzxchq6G

“Please, judges, stop doing this. If you want to retire and go on the stand-up circuit, that’s fine. Best of luck to you. But don’t workshop your material in an order that restricts a person’s freedom,” he tweeted.

Another one for the file. Please, judges, stop doing this. If you want to retire and go on the stand-up circuit, that’s fine. Best of luck to you. But don’t workshop your material in an order that restricts a person’s freedom. https://t.co/snjZZW3NSc