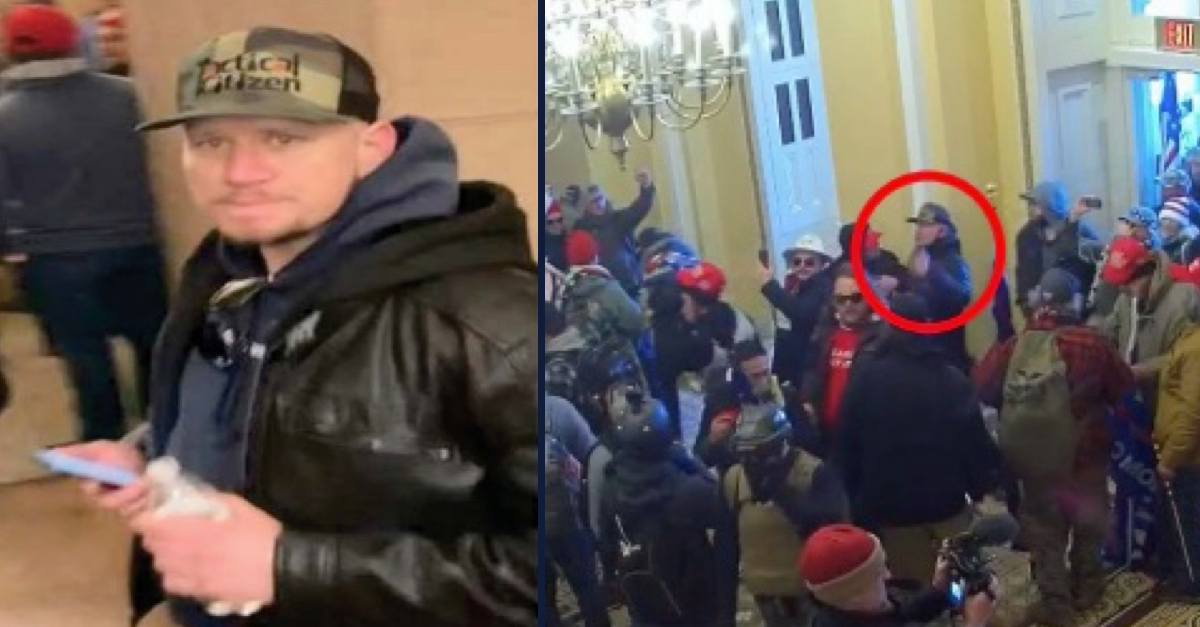 A Montana man who was seen wearing a hat emblazoned with the words “Tactical Citizen” while inside the U.S. Capitol on Jan. 6 will not spend any time behind bars.

Andrew Michael Cavanaugh, 37, was sentenced to two years of probation on Thursday. He had admitted to entering the Capitol building at around 2:23, alongside scores of Donald Trump supporters angry over the results of the 2020 presidential election. Cavanaugh was seen on surveillance footage in the Capitol Rotunda; he spent some 30 minutes inside before climbing through a broken window to exit the building.

He pleaded guilty in February to one count of parading, demonstrating, or picketing in a Capitol building, a misdemeanor that carries a potential six months in jail.

At the time of the Capitol breach, Cavanaugh was wearing a hat bearing the logo of his company, Tactical Citizen, LLC. As Law&Crime previously reported, the company provided “immersive training to Citizens in firearms, defensive tactics, and other emergencies and exigent circumstances.”

Cavanaugh’s would-be promotional effort ended up being his own undoing: federal investigators traced the company back to him.

According to his sentencing memorandum, Cavanaugh closed the company after his arrest because he was “unable to obtain clients.” He now runs a construction business with his wife.

DOJ: Military Service “Puts Mr. Cavanaugh in a Class by Himself, and Warrants a Sentence of Incarceration.”

According to his sentencing memorandum, Cavanaugh is a Marine Corps veteran who served for honorably for eight years, during which he witnessed and experienced significant trauma.

“After the tragic terrorist attack on 9/11, Andrew felt compelled to join the military,” the memo says. “He served his country for 8 years and was a squad leader in Iraq. He still suffers from Post-Traumatic Stress Syndrome (PTSD) because of the trauma he experiences. While in Iraq, he was in active combat and lost 26 marines of his squad to bomb, rocket, and sniper attacks. Andrew was honorably discharged in 2011 due to his PTSD and received many awards during his service.”

“The most egregious aggravating factor here, that is not present in other cases, is the training and experience that the brought with him to the Capitol on Jan. 6,” Fifield said. “Mr. Cavanaugh is a decorated former Marine, and in the past he has served his country. Under other circumstances, that service would be unequivocally laudable, and the government would credit it. But on Jan. 6, Andrew Cavanaugh weaponized his military training against his own government, the country and the people he swore an oath to protect.”

“You use the word ‘weaponized,'” Mehta said. “I think that’s a little bit of an overstatement. There’s no evidence he used any of this training or knowledge[.]”

Mehta drew a distinction between Cavanaugh and other defendants before him who are accused of using military-style tactics to plan an attack and breach the Capitol that day.

“There are others who the government has charged with quite serious conduct who did use their military time and experience in their conduct on that day,” said Mehta, who is overseeing the high-profile seditious conspiracy case against Oath Keepers founder Stewart Rhodes and 10 co-defendants. “There’s no suggestion Mr. Cavanaugh did any of that here.”

“He didn’t do anything on Jan. 6 that was based on his training,” Mehta added. “He just happened to have some knowledge. He didn’t use it in any way. I’ve got people charged with seditious conspiracy accused of using their military experience on that day … [Cavanaugh] doesn’t come close to any of that.”

Fifield replied that Cavanaugh is not any less culpable simply because other Jan. 6 defendants are more culpable.

“He knew what Capitol police were facing that day,” Fifield said of Cavanaugh, who served as a security guard of U.S. embassies abroad. “He knew better than anybody what it would feel like to stand in their shoes. And he persisted. He marched right past those attacks that were happening on the west front.”

“It puts Mr. Cavanaugh in a class by himself, and warrants a sentence of incarceration,” Fifield added.

When it came time to hear from Cavanaugh’s defense attorney Maria Jacob, Mehta pushed back on the argument that the defendant was lost inside the building and was trying to get out.

“There are plenty of people who got out in less than 30 minutes,” Mehta said. “If the government has a point about Mr. Cavanaugh, it’s that he is a trained expert … if there’s anybody who would have had his wits about him on that day and understood how to get out of that building, it would have been him.”

“It’s a little bit mystifying that he walked his way through thousands of people and didn’t stop,” Mehta continued. “How do you explain that?”

An emotional Cavanaugh, speaking on his own behalf, said that his participation in Jan. 6 “really completely ruined” his reputation among friends, family, and his professional life.

“I worked hard after I got out of the military to earn my bachelor’s degree and start a business, and that was ruined by this,” he said. “I did use my military experience, but everything I was taught in the military was always try to mitigate a situation and de-escalate,” he added, referring to his assertion that he told other rioters not to destroy government property and helped some people who were injured.

Cavanaugh said that he plans on “never participating in anything like that again,” and told Mehta that the experience has had more of an impact on him than his military service.

“This has really honestly changed my life more than serving in combat,” Cavanaugh said. “I’m sorry to the government for being here. The government has only changed my life for the better; aside from actually fighting in a war, I’ve used my GI bill to get a degree, I used my VA home loan to purchase a home. I just want to raise my family and hope that my country unifies again some day.”

“If I ever thought [while] in the mountains of Afghanistan or the streets of Iraq that my country-people would be so against each other politically …” Cavanaugh continued, trailing off before bringing his comments to an end. “I’m sorry to you for having to be in front of you today. That’s all, Your Honor.”

In sentencing Cavanaugh to 24 months of probation, Mehta said that he didn’t want Jan. 6 defendants to think that probation was the presumed punishment, and he implied that even with the government’s expansive prosecution of the Jan. 6 attack, the root cause has not been adequately addressed.

“I think we forget to ask the question why,” the judge said, noting that many of the people who made up the mob at the Capitol that day are “ordinary people” without a history of criminal activity or political activism.

“They work hard in their jobs, work to make a better life for themselves and their children,” Mehta said. “In Mr. Cavanaugh’s case, [he] served this country for eight years, with tours of duty in Afghanistan, Iraq … over two dozen of his men died in combat. It really does in my mind go to the power of propaganda – the power of [repeating] lies over and over and over again, told by leaders who knew better.”

Mehta said that Cavanaugh is “not blameless by any stretch of the imagination,” and that the presence of him and others contributed to the strength of the mob that overwhelmed law enforcement that day. But now, Mehta said, people “who otherwise lived honest and humble lives” are now facing serious jail time.

“It’s just one of the many tragedies to come out of that day, and will linger in this country forever and ever,” Mehta said.

Pursuant to his plea agreement, Cavanaugh will pay $500 in restitution toward the estimated $2.7 million in damage to the Capitol, as well as 60 hours of community service.