Jan. 6 Defendant and Apparent ‘Deep State’ Believer Wants Federal Judge Who Also Presides over Surveillance Court to Try His Case Without a Jury 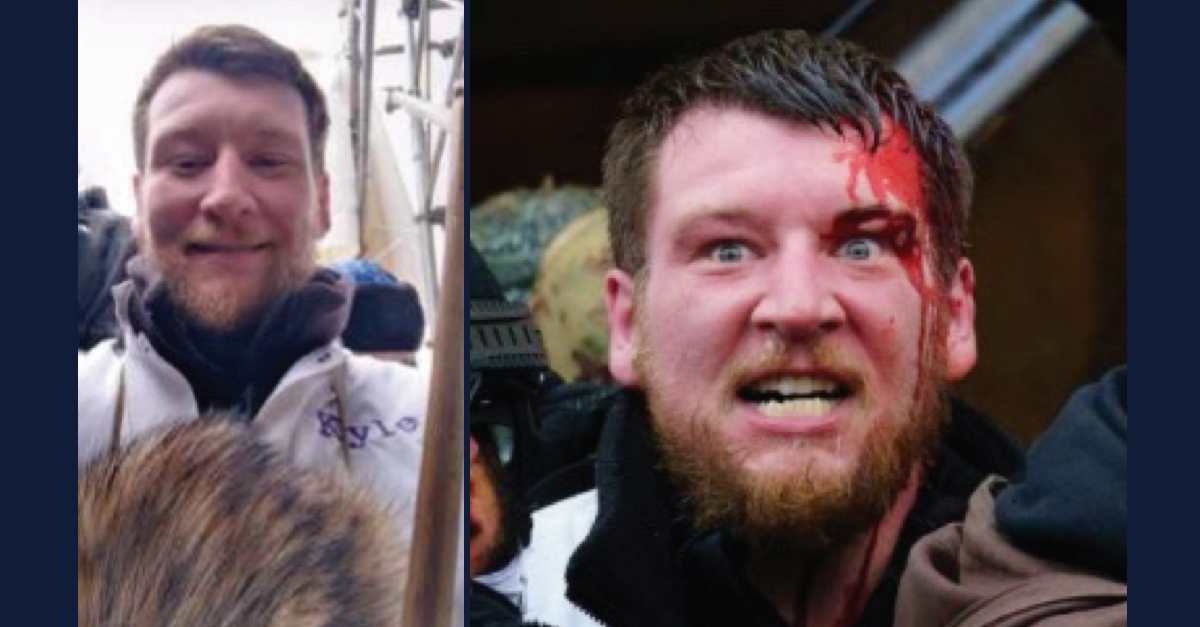 Kyle Fitzsimons at the Capitol on Jan. 6 (images via FBI court filings).

An alleged Jan. 6 Capitol rioter from Maine who had previously second-guessed his request to have his case heard without a jury has officially decided to have a bench trial after all.

Wednesday’s status conference for Kyle Fitzsimons, 38 — the fur pelt-clad man from Maine whose bloodied face has become one of the most memorable images from the attack on the U.S. Capitol — had previously indicated he wanted to waive his right to a jury trial and have his case heard solely before U.S. District Judge Rudolph Contreras.

As Law&Crime reported at the time, Contreras, a Barack Obama appointee, had wanted to make sure Fitzsimons knew just who would be deciding his case.

“I know he’s focused on the existence of things like the ‘deep state’ and things of that nature,” Contreras said during an exchange with Fitzsimons’ attorney Natasha Taylor-Smith at a hearing in May. “If you look around the internet, there are people who think I’m a part of the ‘deep state,’ if not the center, [and] and I want to know that [Fitzsimons] knows these things.”

Contreras went on to explain that while those allegations are “obviously unfounded,” he didn’t want to be in a situation where Fitzsimons could later say he didn’t have all the information. The 59-year-old is the presiding judge over the Foreign Intelligence Surveillance Court, a term that expires in May 2023.

Taylor-Smith, a federal public defender, told Contreras that she had discussed the pros and cons of a bench trial with the Fitzsimons. She also confirmed that she and Fitzsimons had discussed prior cases in Contreras’ court, including that of former National Security Advisor and retired Lt. Gen. Michael Flynn, who had pleaded guilty to lying to the FBI before withdrawing that plea and ultimately receiving a pardon from Trump in November 2020.

Contreras had recused himself shortly after Flynn entered his plea.

“And related to that recusal, does he understand that I’m friends with the former FBI agent Peter Strzok?” Contreras continued, adding that his family and Strzok’s family had been friends “for some years” and that their kids “grew up together.”

“I don’t think he was aware of that,” Taylor-Smith said. “We did not discuss that matter.”

Strzok, Contreras explained, “has been at the center of many conspiracy theories involving President Trump.”

That friendship, at least for a time, appeared to stop Fitzsimons in his tracks. When Contreras asked Fitzsimons if he wanted to take some time to consult with his lawyer at that point, the defendant, who has been held in federal custody and was appearing by video, took the opportunity to go into a virtual “breakout room” with Taylor-Smith.

When they returned moments later, Taylor-Smith advised Contreras that her client “does have some concerns about a bench trial at this point” and that he would prefer a jury trial.

At the time, Contreras accepted this, but he told Taylor-Smith that if Fitzsimons changed his mind after thinking about it, they could take up the matter again at the status conference scheduled for Wednesday.

That’s apparently exactly what happened, and this time, Fitzsimons didn’t show any hesitation.

During his colloquy with the defendant, Contreras asked Fitzsimons whether he had sufficient time to consult with his lawyer.

“Yes, Your Honor, I have,” Fitzsimons said. “It’s been a conversation that’s been ongoing for the past few weeks.”

“The two of you have discussed the advantages and disadvantages of a jury trial versus a bench trial?” Contreras asked.

“At length, Your Honor,” Fitzsimons replied.

“And also the advantages and disadvantages of a bench trial before me?” Contreras pressed.

“We have, Your Honor,” Fitzsimons confirmed.

Later in the hearing, Taylor-Smith told Contreras that her client “seems to understand all of his rights, and he is willing at this point to waive his right to a jury trial and proceed with a bench trial before this Court.”

With that, Contreras found that Fitzsimons as “knowingly and voluntarily waived his right to a jury trial.”

Fitzsimons is accused of a range of violent felonies, including civil disorder, obstruction of an official proceeding, and assaulting police officers with a dangerous or deadly weapon. His trial is set to start on Aug. 16.