Tim Boughner Explodes at Jan. 6 Hearing: 'I'm Done With This'

Jailed Jan. 6 Defendant Lashes Out and Leaves Court Hearing: ‘I’d Like to Go Eat My Food and Play Cards’ 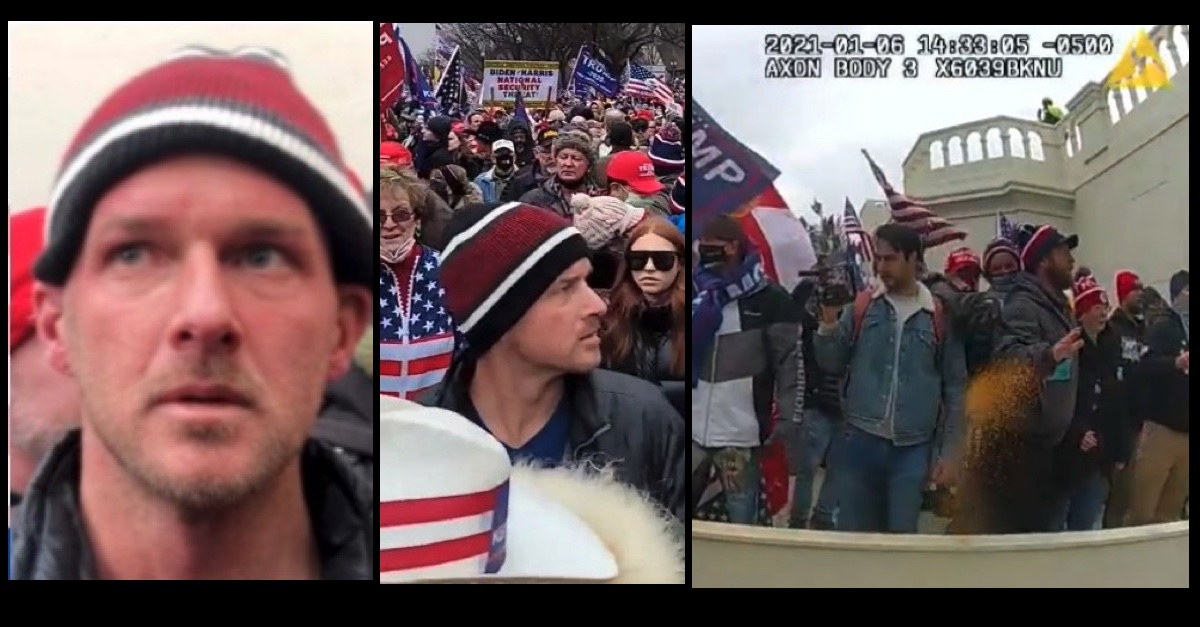 A Michigan man accused of assaulting police with chemical spray during the Jan. 6 Capitol riot interrupted the judge overseeing his detention hearing, announced that he was “done with this,” and left the proceeding after the judge said he would keep the man behind bars.

Tim Boughner, 41, of Romeo, appeared via video for his hearing before U.S. Magistrate Judge Zia Faruqui on Wednesday. According to prosecutors, Boughner used chemical spray against police multiple times as he stood among the front lines of the pro-Donald Trump crowd looking to stop the certification of Joe Biden’s win in the 2020 presidential election. Boughner later posted on Facebook that while at the Capitol on Jan. 6, he “started spraying” and bragged that he “fucked those cops up.”

Boughner also allegedly used a metal bike rack to try and push police back as they tried to stop the crowd from swarming the building.

Boughner has been in federal custody in Michigan since December.

“I’d Like to Go Eat My Food and Play Cards”

Boughner’s detention hearing was relatively uneventful at the start. Faruqui began by stating his intention to deny Boughner’s request for pretrial release, citing concerns that he was both a flight risk and a danger to the community.

“This is in fact one of the few cases where I believe the risk of flight is a real concern,” Faruqui said, noting that Boughner’s own mother, who offered to serve as custodian if he was released, could not guarantee her son’s compliance. Faruqui said that based on the evidence provided, he believed Boughner may try to flee to Canada or elsewhere in Michigan, and might fail to appear for future court hearings.

“He was with a group that just by their mere presence created a threat to law enforcement,” Faruqui said.

Faruqui also said that one of Boughner’s “assaultive” actions—picking up a metal bike rack and pushing it against law enforcement officers—was “gravely serious” and indicated possible future dangerousness.

Faruqui then turned to Boughner’s posts and conversations on Facebook both before and after Jan. 6. He had just begun running down a list of statements included in the government’s request for pretrial detention when Boughner interrupted him.

Much of it was unintelligible, as both Boughner and Faruqui were talking at the same time and the audio wasn’t always clear, but Boughner’s frustration was apparent.

“You got these dumbass comments that you’re saying I said but I did not say these things,” Boughner shouted. “Do we really have to go through all this?”

Faruqui repeated what he had said at the beginning of the hearing: that Boughner could appeal his decision.

Boughner again interrupted the judge, cutting him off.

At that point, Boughner’s attorney James McHugh, a federal public defender, asked for some time with his client in a virtual breakout room. After a few moments, McHugh returned to the hearing. Boughner did not.

Judge: The Events of Jan. 6 Were “Monstrous”

After agreeing with both McHugh and Assistant U.S. Attorney Mitra Jaray-Hariri that Boughner had appropriately waived his appearance at the hearing, Faruqui resumed stating his reasons for keeping Boughner behind bars.

He said that Boughner had a “de facto leadership role” that day, noting that “when rubber bullets rained down, instead of running away, he, like a leader, picked up a can [of chemical spray].”

Faruqui said that Boughner’s actions had “the effect of a general rallying the troops around him and convincing them to continue,” instead of retreating, which is what they should have done.

Faruqui also commented on Boughner’s mindset on Jan. 6 and since then.

“He had no remorse at the time it happened,” Faruqui said. “Nothing that’s indicated to me he has remorse.”

Faruqui said he was most troubled by Boughner’s apparent continuing belief that Trump won the 2020 election. He took particular issue with social media posts from Boughner on Feb. 17, 2021, when Boughner wrote that Biden “is not the president.”

Boughner later posted: “I have to share. My life has not been the same since this day. I got pull threw [sic] something amazing. I still don’t know how I ended up on the capital steps having a pepper spray fight with the capital police.”

The experience of Jan. 6, Faruqui said, was far from “amazing.”

“In fact it was monstrous,” Faruqui said. “By every account, [the rioters] assaulted law enforcement officers [and] hung gallows. No one, I think, can fairly describe that as amazing.”

In an apparent show of empathy and acknowledgment of the challenges that can come with representing defendants in custody, Faruqui praised McHugh, Boughner’s attorney, as the hearing was coming to a close.

“I appreciate your diligence in continuing to represent your client,” Faruqui said.

Read the government’s request for pretrial detention, which details Boughner’s alleged actions, below.